What’s the most important part of a comic? The art or the script (story)?

There’s a friend of mine who always wants to discuss (debate) this subject when I run into him, either in person or online. He’s an art guy, so the book has to look good. Story? Oh, yeah, there’s that, but it’s not nearly as important as how the issue looks.

Me, I come down on several levels. Maybe you can help me with that! 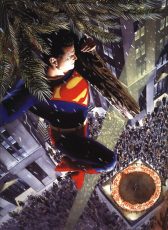 I used to work at a famous metropolitan newspaper, and the debate there was always between news/features and advertising. Which one was most important when it came to sales? I worked in a part of Advertising, so I was surrounded by people who thought ads were the most important part. Well, they did bring in a lot of money, that’s for sure!

When it comes to comics, I’ve spoken with several pros who tell me that the cover is critical. I have to admit that when I go to a store or check out comics online, I look over all the offerings, then investigate the ones that appeal to me visually. I very rarely go past a cover that doesn’t do anything for me unless there’s another reason to do so, like the writer or the character.

However, I know a lot of fans who don’t like “deceptive” covers. You know, the ones done by a “better” artist while the inside art hardly resembles what we saw outside. Again, I know that selling the book is most important, and if your team that takes over inside is a different one, well, maybe the story will keep them!

There are also a LOT of artists who I follow. If they’re in even part of the comic, I’m there plunking down my dollars. These include Alex Ross, George Perez, Greg Capullo, Bob Layton, and Steve Pugh, among others. Yowsa!

The first guy on that list, Mr. Ross, he’s someone I often wish I could have his art printed on huge posters that could go on the wall in my room. For example, there was a panel from an oversized Superman book he did in which the Man of Steel is landing while carrying a Christmas tree. I’d still like that as a poster, by the way!

What bugs me a lot these days about art is that often, as great as they are, I’ve never heard of many of the artists in comics. Some of their product is spectacular, but I often see their stuff once, and that’s it! It’s not like the days of Todd McFarlane or John Byrne or Bill Sienkiewicz. Those names I knew!

So, there’s a good case to be made for art being the most important part of a comic!

While I do think the cover is often the most influential part of a comic, the story is what keeps me coming back for more.

Are the characters engaging? Is the dialogue interesting? Is the story well thought out?

But there’s one absolutely critical aspect of writing that I just have to have, and that’s surprises! And good ones, too!

Now, please, no surprises out of left field or the other side of the galaxy with no hint it’s coming. Foreshadowing is a sign of top-notch writing, and it’s what makes a surprise worth reading.

I’m always reminded of when Batman took on the White Martians in an early issue of JLA that was written by Grant Morrison. The Dark Knight was very casually spreading around some liquid when the three Superman-level baddies appeared around him. The woman of the bunch said they were about to grind his bones to dust, so did he have any last words?

“A few,” he responded. He then explained exactly what was going on, listing what was happening and how all that indicated Martians. I remember gasping out loud when I read that. See, I was absolutely convinced there was no way he could escape this one!

He had been pouring gasoline around, then dropped a match into it, which caused all the Martians to recoil in pain. Batman just hit one hand inside his other fist and calmly said, “Ready when you are.” I remember pumping my own fist in the air when I read that! Yes!

See, THAT’S why I read comics! So writing is a critical aspect of the book as well!

Some of my favorite writers that I follow are Scott Snyder, Joshua Williamson, Robert Venditti, Mark Waid and Gail Simone. If they’re writing the words, I want that comic!

A COMBINATION OF THE TWO? 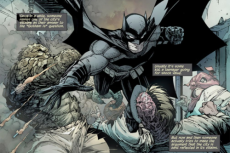 Honestly, the best comics I read tell stories in such a way that the perfect blending of both art and script is such that I can’t find the line between the two.

The recent Scott Snyder/Greg Capullo Batman run was just such an event for me. I was yanked completely into what was happening so completely that I couldn’t take the time to try and sort all that out – I just had to know what was going to happen next!

It’s like going to a movie and suddenly something happens that pulls you back out of the film and reminds you that you’re sitting in a theater someplace. I just hate it when that happens!

If the art or the story are so great that I focus solely on that, then I’m back in my room, sitting there reading the book instead of being in the Batcave wondering along with the Dark Knight how he’s going to capture the Joker! Again, I just hate it when that happens!

So, I vote for a combination of the two of them! What do you think?