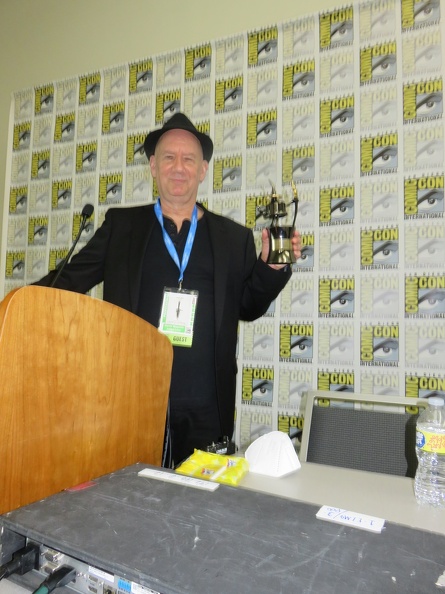 Kevin Maguire Spotlight (46:40, 106mb)
Kevin got an inkpot award. He talked a bit about his life before being a professional cartoonist, breaking into doing comics, JLA and the One Punch page, Captain America Sentinel of Liberty, Strikeback at Malibu and Wildstorm, working with Darkhorse and Image Comics and Alan Moore in particular, Trinity Angels at Acclaim Comics, how nobody was happy with JLA Created Equal, X-men Forever, meting Michelle Rodriguez, working with Stan Lee for his version of the Flash, working on JLA again, the changes made to Maxwell Lord, Defenders at Marvel, Batman Confidential and his thoughts on the naked Batgirl Catwoman fight, Amazing Spider-man with Seth Myers and Bill Holden, Metal Men, his creator owned Tanga, Weird World, how the coloring got messed up in JLI Retroactive, Worlds Finest with Paul Levitz and George Perez, the Justice League 3000 that didn’t come out, Guardians of the Galaxy and Man of Steel with Brian Michael Bendis, why he did Supergirl and his upcoming Human Target. He also answered questions on his inspirations, what he was into as a comic fan, what he doesn’t like to draw, what he would have liked to do but haven’t, how he likes a full script with dialog but leave the action part open, advise he’d give the new artists, his regret for selling the One Punch page, working digital and his love of Dave Stevens.