Image Comics to publish the BAD WEEKEND hardcover edition this July, ahead of San Diego Comic-Con</em 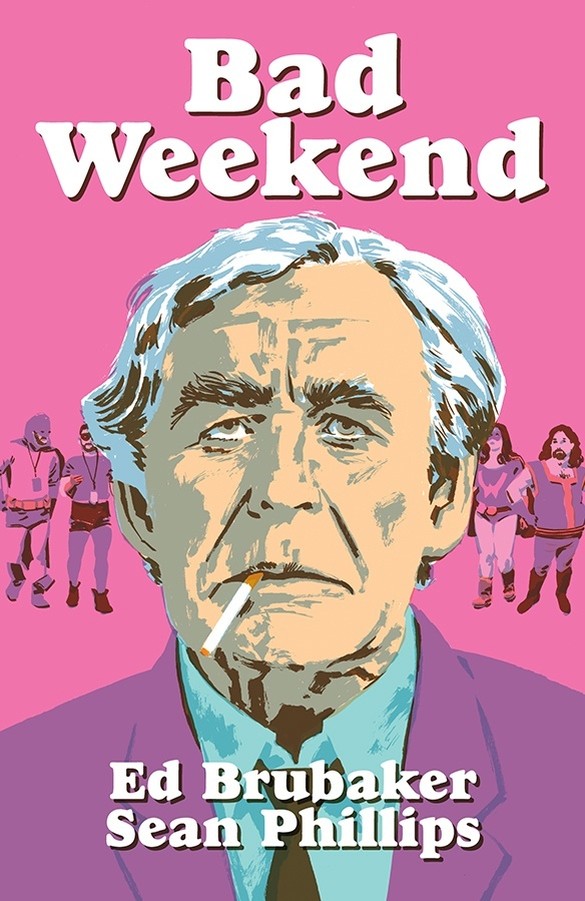 PORTLAND, OR 04/22/2019 — For nearly two decades, writer Ed Brubaker and artist Sean Phillips have created some of the most acclaimed and hard-hitting crime comics in the medium’s history—and now they’re exposing the seedy underbelly of the comic book industry itself. Their latest collaboration, Bad Weekend, explores comics history through the genre lens of crime fiction, bringing readers on a dark ride through the secret history of an industry that’s always been haunted by crooks, swindlers, and desperate dreamers. Image Comics will publish Bad Weekend—the ultimate comic convention crime tale—as a hardcover this July, ahead of San Diego Comic-Con.

In Bad Weekend, we meet Hal Crane, a legendary cartoonist who’s been around since the earliest days of comics. Hal knows that comics won’t just break your heart. Comics will kill you. Stuck at an out-of-town convention waiting to receive a lifetime achievement award, Crane must confront a history of old grudges and terrible mistakes.

“I feel like this is a comic I’ve been writing in my head most of my career,” said Brubaker. “Hal Crane isn’t based on anyone in particular. But bits and pieces of his history are lifted from sad tales and sordid gossip that you hear over the years in this business, especially about the old days. Gambling. Drinking. Prostitution. Theft. Death. There’s always been a darkness at the edge of comics and I wanted to explore that in Bad Weekend. Is this an exposé of the industry? Sort of, but it’s a love letter to the medium, as well.”

Bad Weekend features an expanded and remastered version of the story recently serialized in issues #2 and 3 of Criminal, with several completely new scenes, and presented in the same gorgeous hardcover format as Brubaker and Phillip’s bestselling graphic novel My Heroes Have Always Been Junkies. And like every Criminal graphic novel, Bad Weekend is a stand-alone story that works as a singular reading experience.

Praise for Bad Weekend and Criminal:

“Criminal is easily one of the best comics of the 21st century. Dark, dirty, and addictive, it updates and deconstructs the crime genre to tell a story that reflects the crooked soul of our times.” —Eisner Award-winning writer Tom King (Mr. Miracle; Sheriff of Babylon)

“Bad Weekend is the Ghost of Christmas Future that all freelancers fear. I am chilled to my core.” —Hugo Award-nominated writer Kelly Sue DeConnick (Bitch Planet, Captain Marvel)

“Far and away the best work yet from one of the best teams in the history of comics. Essential reading.” —New York Times-bestselling writer Brian K. Vaughan (Paper Girls; Saga)