November 26, Mt. Laurel, NJ: In collaboration with Dynamite, Christopher Priest is celebrating Black History Month and paying tribute to the contributions of creators of color on his Vampirella run.

As Christopher Priest’s acclaimed run on Vampirella has continued on, the veteran writer and editor is constantly working closely with Dynamite brewing new ideas to engage the comic book community of fans, retailers and press. For February’s VAMPIRELLA #8, Priest thought of a symbolic way to pay tribute to an underrecognized and underutilized portion of creators and fans.

“It is a significant and unique gesture on Dynamite’s part to work with me to acknowledge the contributions of African American artists in this industry with a set of covers exclusively developed by artists of color,” said Priest. “Both my veteran buddies and inspiring boundary breakers creating their own unique expressions of our favorite Vampiri.”

Priest and editor Matt Idelson carefully assembled a team comprised of Denys Cowan, Alitha Martinez, Mark Beachum and Afua Richardson to contribute covers inspired by a simple premise. They were asked to imagine creating the Daughter of Drakulon back in 1969 as if her appearance was inspired by African American women rather than the Bettie Page and Barbarella vein that James Warren, Forrest J. Ackerman, Frank Frazetta and Trina Robbins ended up tapping into. They are also joined by returning cosplayer Mai (Maidenhellxo). 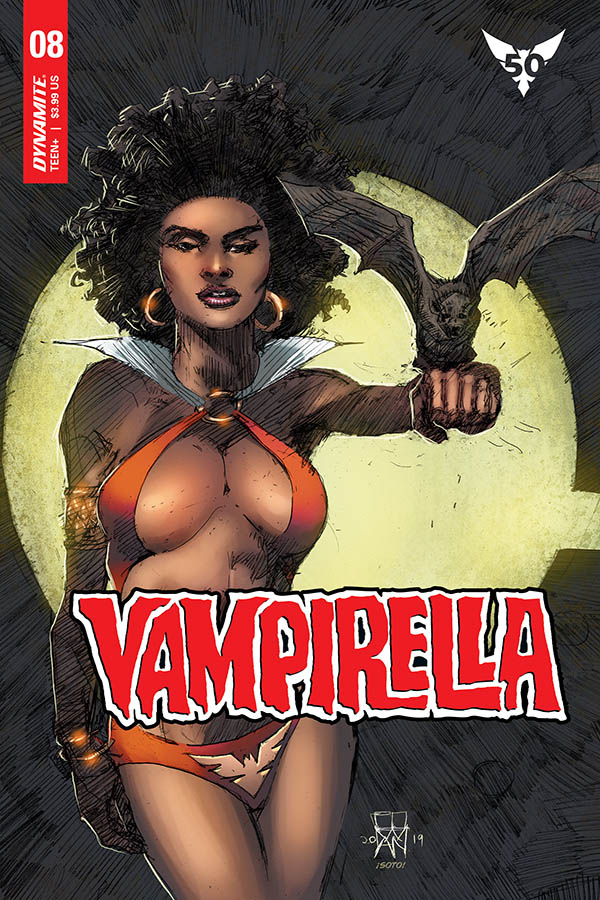 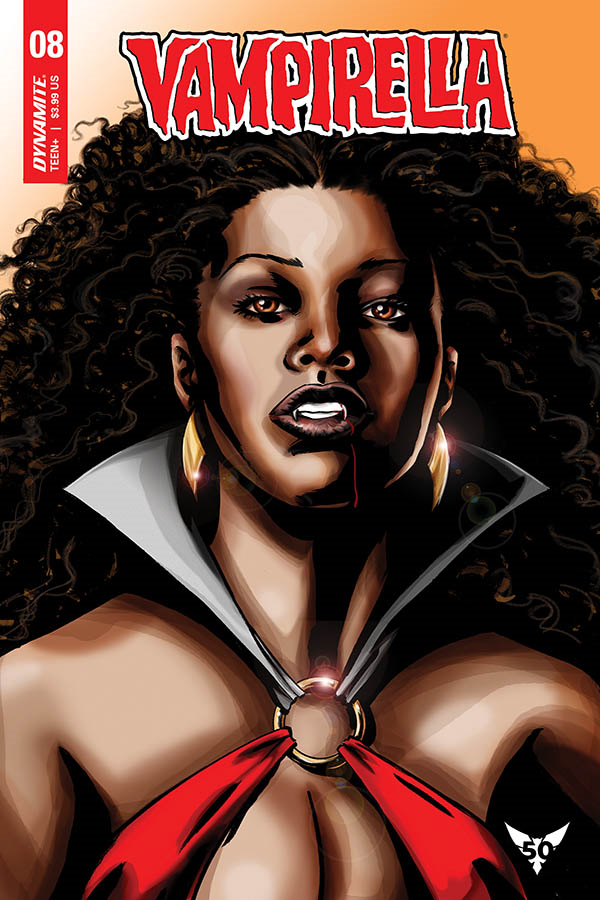 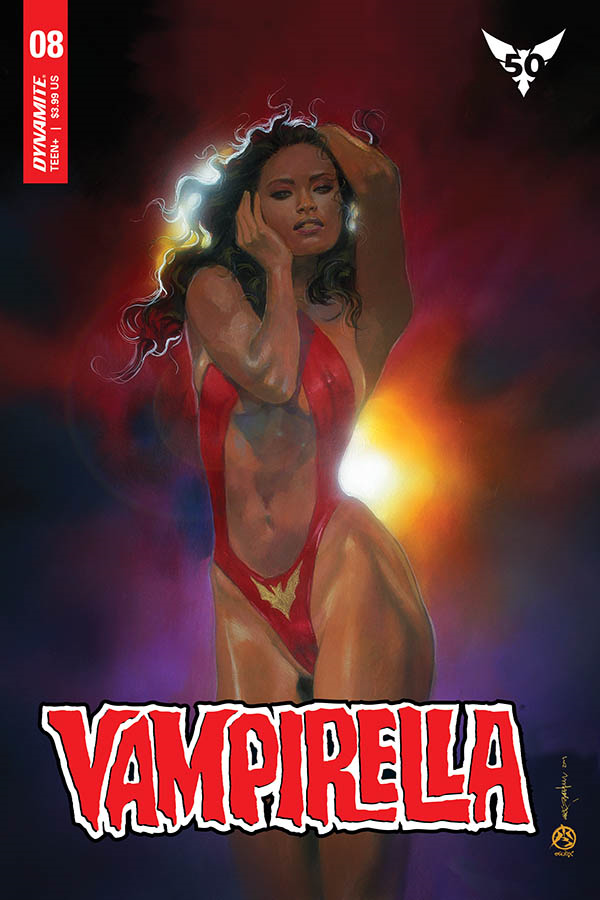 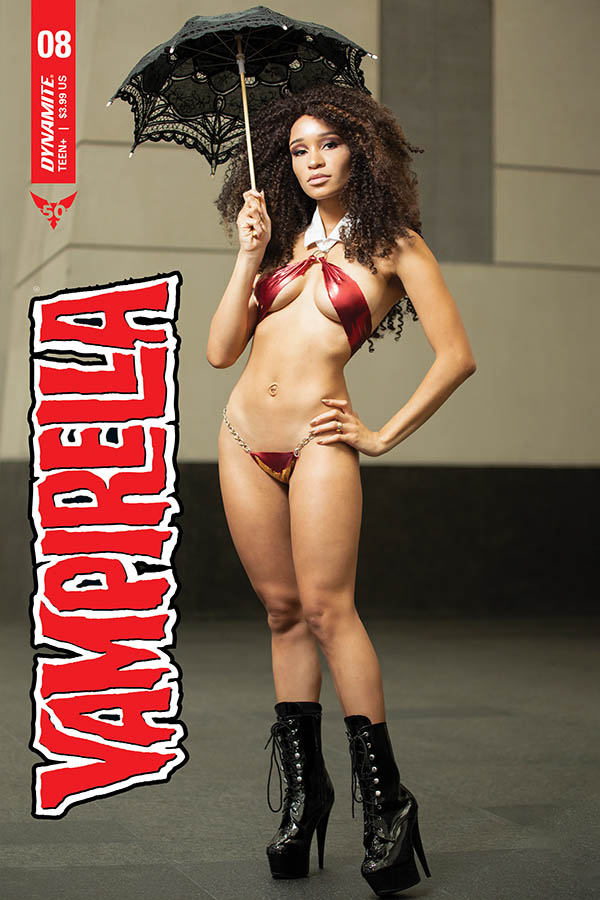 Leading the charge is Denys Cowan, one of the most beloved artists bar none. Denys was a natural fit, with he and Priest going back decades to their criminally underrated collaborations on Power Man & Iron Fist, Steel, and the development of Milestone. Most recently they worked together on the boundary-pushing Deathstroke #11. He continues to work on major titles like The Question: The Deaths of Vic Sage. Cowan’s cover is inked by Kent Williams.

Cowan shared with Dynamite, “It’s always great to work with Mr. Priest and I’ve always been a Vampirella fan! I love the older covers and loved the black and white interior art from the 1970’s. This was a wonderful opportunity to reconnect with a favorite character in a different way.”

Alitha Martinez was at the top of Priest’s list, as one of the most prolific African American female artists. Her breakout goes back to Priest’s own iconic Black Panther #1, with her inking Mark Texeira. Since then she’s drawn other major titles like Iron Man, Batgirl, and a return to her roots with the critically acclaimed Black Panther: World of Wakanda.

“Vampirella is one of those iconic characters who you instantly recognize,” said Martinez. “In reimagining her I had to try to preserve what made her so viable. For me, it wasn’t her body but the strength and beauty of her face, and touch of danger in her eyes. While her raven black hair is a princess of darkness staple, there’s something magical about textured hair, like a crown for a queen, that begs to be touched. We should want and fear vampires at the same time.”

Another returning collaborator is Mark Beachum, who Priest brought into the industry while he was editing the Spider-Man line at Marvel. Beachum is also returning to Vampi, as he did several covers in the Harris era and Dynamite is representing he and Louis Small Jr. as “Icon Incentive” covers.

“I was about 10 or 11 when I discovered Warren and that international cast of artists expanded my interest in art beyond the bandwidth of mainstream superheroes. Esteban Maroto, Jose Gonzalez, Jordi Bernet, Gonzalo Mayo, Frazetta, Vaughn Bodé, Sanjulián, and Enrich Torres were like a huge crew of brilliant art teachers showing me what was possible. Vampirella functioned as a landmark that provoked the modern era of creators to expand their ambitions. This is what inspired, has sustained and continues to instruct me to this day.”

Afua Richardson burst onto the scene with the novel independent title Genius, and quickly established herself as one of the most talented and forward-thinking artists today. Currently, she does fan-favorite covers and collaborates with Civil Rights leader and Congressman John Lewis on his graphic novel Run.

“Vampirella is as provocative as she is powerful,” said Richardson. “I love how she’s evolved through time. You didn’t see a lot of lady heroes in 1969. But Trina Robbins was always great about making mighty maidens who didn’t need saving. Now she’s in the hands of Christopher Priest who always has an amazing way of breathing a new life and perspectives into legacy characters. I’m honored to be a part of this.”

For Vampirella fans who want to additionally continue their runs of covers by the series regular artists, Dynamite is expanding the range of covers to still include Guillem March, Fay Dalton, Ergün Gündüz and Lucio Parrillo. 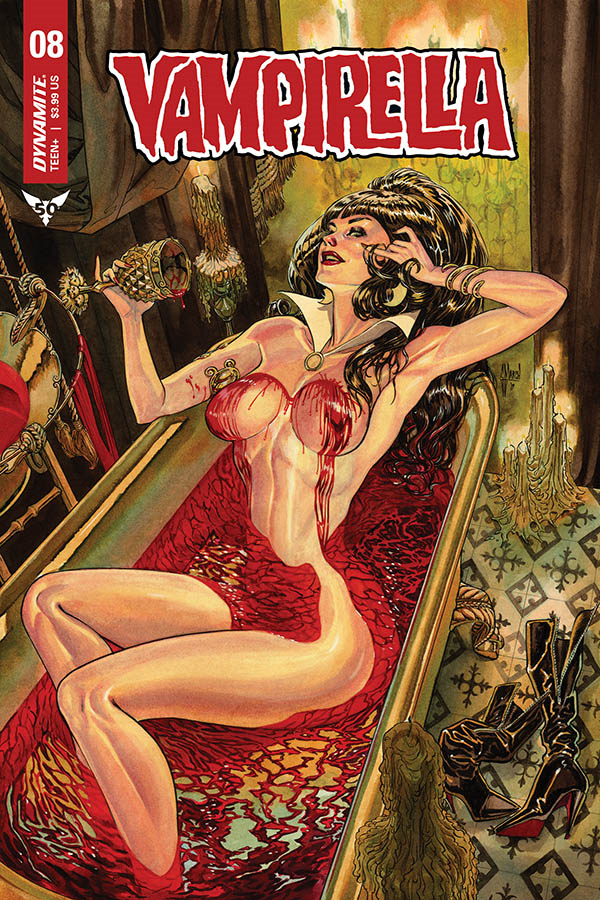 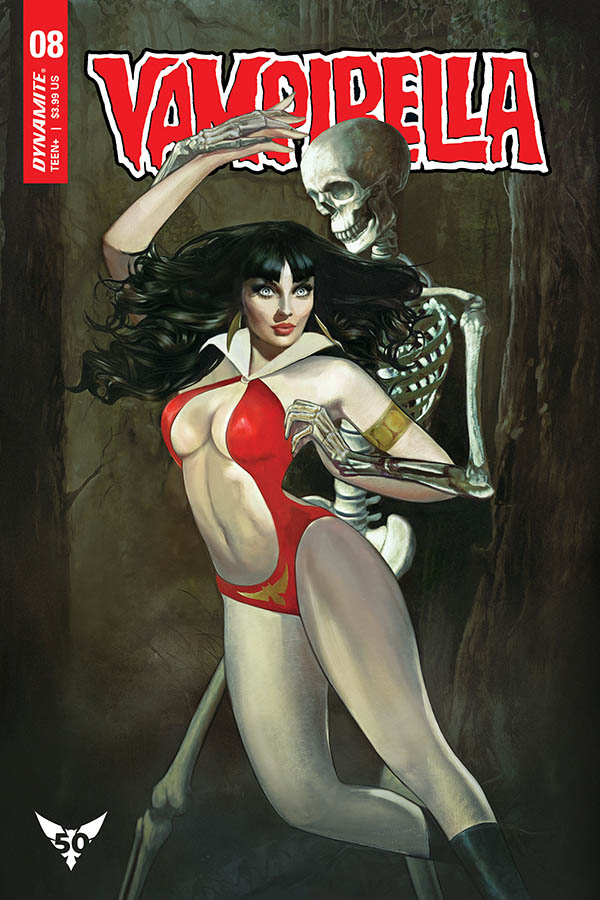 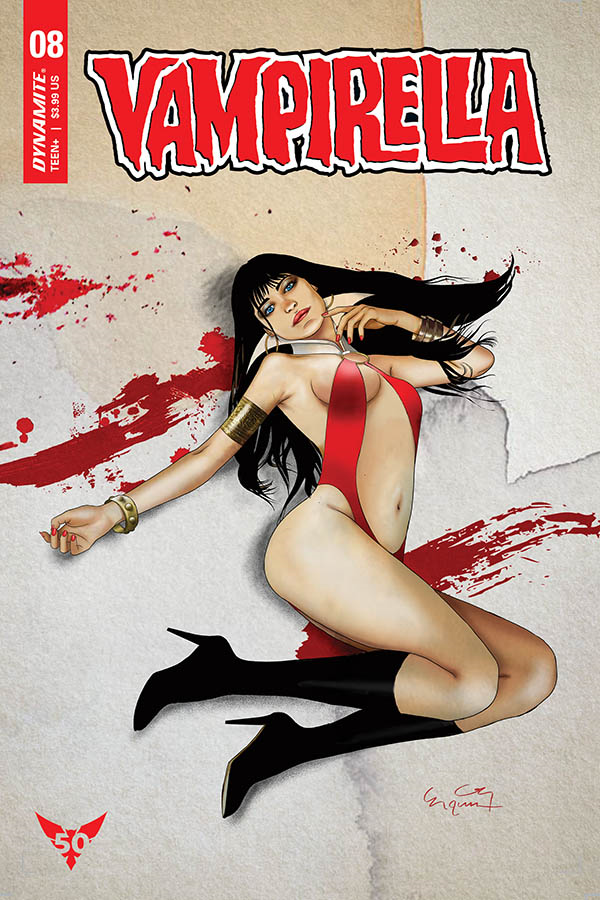 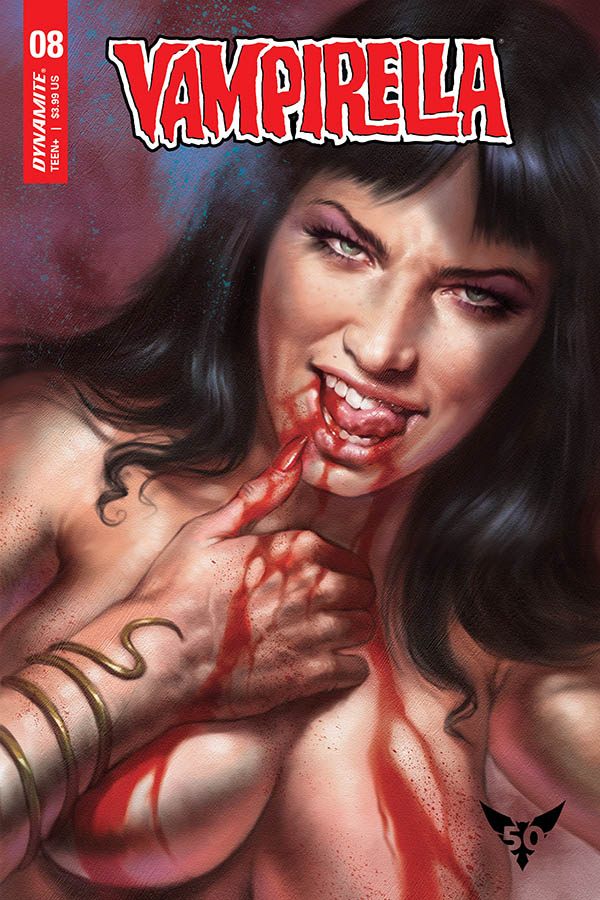 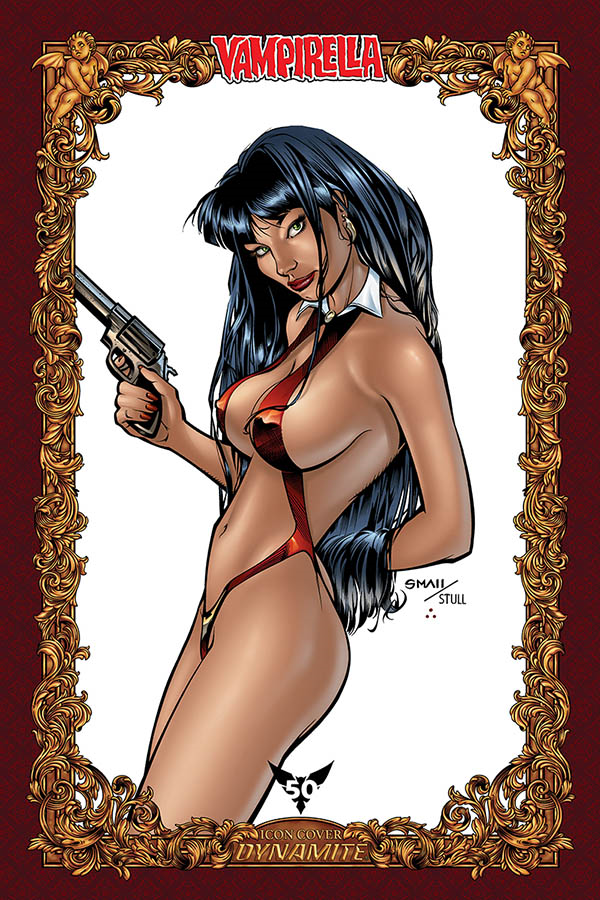 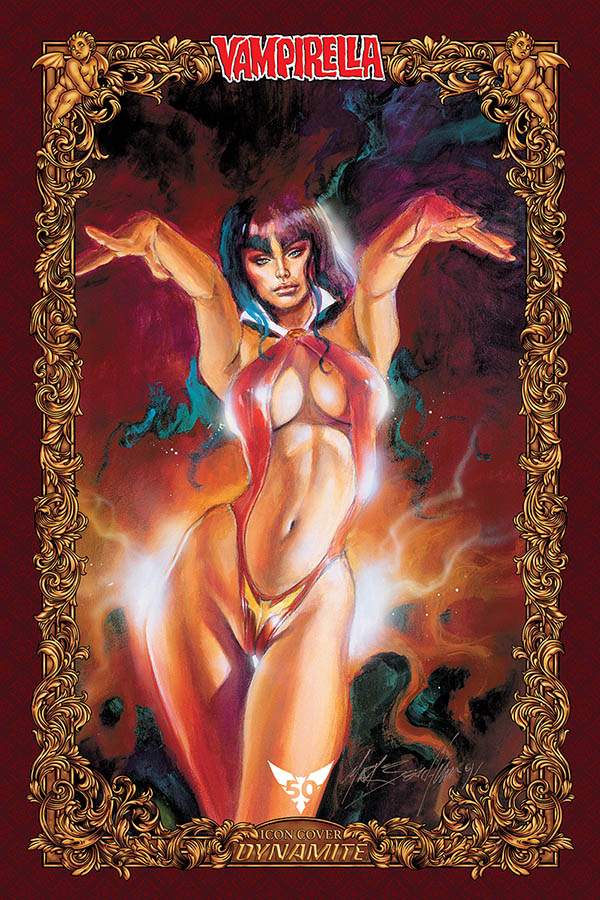 “Christopher’s work on this series has been astounding, his ideas continue to grow the tapestry of Vampirella as an iconic comics character right up there with the greats,” said Nick Barrucci, Dynamite CEO and Publisher. “This initiative he came to us with was too exciting to not get behind 100%”

VAMPIRELLA #8 will be solicited in Diamond Comic Distributors’ December 2019 Previews catalog, the premier source of merchandise for the comic book specialty market, and slated for release in February 2020. Comic book fans are encouraged to preorder copies of the issue with their local comic book retailers. It will also be available for individual customer purchase through digital platforms courtesy of Comixology, Kindle, iBooks, Google Play, Dynamite Digital, ComicsPlus, and more!