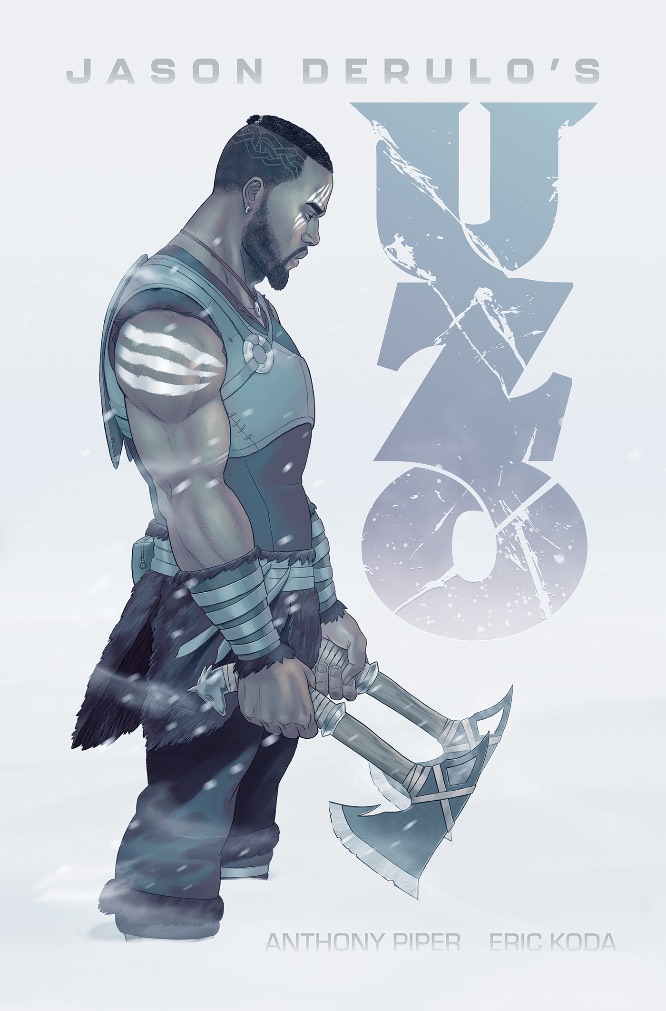 NEW YORK, NY— Z2 Comics continues to bring performers from every corner of the modern entertainment landscape to four color fiction with some of the most inventive and inspired graphic novels available from any publisher. Today’s news is no exception; this time teaming singer, songwriter and dancer Jason Derulo with Trill League writer Anthony Piper and Generation X artist Eric Koda for Jason Derulo’s UZO, based on an original idea from the artist himself!

Jason Derulo says “I’ve been working on bringing Uzo to life for years. From writing scripts to skits on TikTok. So blessed to have worked with a dream team of creators to bring the best version of ‘Uzo’ to you.”

In the distant future, a mysterious asteroid turns the planet into a frozen wasteland where the last gasps of humanity fight over dwindling resources. A lone champion named Uzo becomes the last hope for both his village and the planet!

“When I spoke to Jason about his idea, I was excited by his vision to turn his Uzo character into a hero—but even more excited that he was open to exploring dark and emotional themes that I felt were pertinent to the times we live in” says writer Anthony Piper. “We’re creating something unprecedented for a black hero. Something that speaks on the responsibility that comes with manhood and being a protector, of not only family, but the planet itself. Plus, I know with art by the talented Eric Koda, this story is going to be a visual treat for the reader.”

Artist Eric Koda says “This is an epic story with some real powerhouses behind it! I am excited to help bring this world to life”

Forward-thinking, genre-defying, and massively creative, Jason Derulo has staked his claim as one of the most dynamic forces on the global pop landscape. Since breaking through with his five-times-platinum single “Whatcha Say,” the award-winning singer/songwriter has sold more than 200 million records worldwide. His latest triumphs include emerging as one of TikTok’s most influential users, boasting the 11th overall biggest account on the video-sharing platform, prevailing as the fourth-most-followed male, and regularly amassing over five million views per TikTok post. Now at work on his highly anticipated fifth album—and full-length debut for Atlantic Records—Derulo recently delivered a series of smash singles while operating as an independent artist. Those tracks include the wildly catchy “Lifestyle” feat. Adam Levine, “Take You Dancing” (a pandemic-era love song that’s inspired over a half-million videos on TikTok), and the double-platinum “Savage Love (Laxed – Siren Beat)”—a collaboration with New Zealand-based producer Jawsh 685 that hit No. 1 on Top 40 radio, with its official BTS remix reaching the top slot on Billboard’s Hot 100. A truly multidimensional creator, Derulo has also established himself as an actor and businessman, investing in enterprises like Catch L.A. and Rumble Boxing and becoming part-owner of Bedlam Vodka. With his most recent ventures including launching an innovation-minded podcast and developing a line of supplements and fitness products with the Najafi Group and BodyBuilding.com, he’s also partnered with Z2 Comics to create a graphic novel — a project based on a superhero called Uzo, the crime-fighting character he first introduced on TikTok.

Jason Derulo’s UZO has been translated from the influential artist’s vision to print by writer Anthony Piper along with artist Eric Koda, with an exclusive limited deluxe version to include prints by artists Anthony Washington, Raymond Gay & Andres Mossa, and interior artist Eric Koda. This expansive new story arrives in finer comic shops and bookstores everywhere just in time for Halloween cosplay, with all editions, including the exclusive deluxe and signed super deluxe hardcovers available to preorder directly from Z2 now!