As a lifelong Batman fan, I’ve been patient. However, DC recently crossed the line with a Lobo-Batman! That was just too much, DC!

HOW DID I GET HERE?

I have been a Bat-fan since I was little. In fact, the very first thing I ever read was a Batman comic. Batman was wearing a wooden glider on his back to swoop in the sky and patrol a castle in England. As Frank Miller has also described it, I fell in! I was hooked and am still a passionate fan of the hero!

See, Batman has been through so many different eras, and each has taken the guy where no “Batman” has gone before, so to speak.

Whenever Batman toys came out, the first one was usually the only one I would buy. It was how Batman looked in the companion cartoon/TV show. Then we got the weird stuff. Arctic Snow Batman, Undersea Batman, Spacewalk Batman, Batman who looked like he was on fire, and Batman who looked like kids had painted his costume, for example.

Even with all of those various Batmen, DC finally crossed the line when they introduced what Lobo called “a Frazetta Batman” who was actually a Lobo-Batman in Dark Nights: Death Metal Infinite Hours Exxxtreme! #1. He’s called “The Batman Who Frags,” obviously a play on the Batman Who Laughs.

That was the last straw!

I GET THAT BATMAN IS DC’S BIGGEST STAR 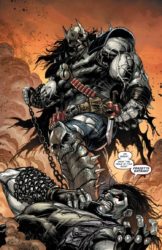 I have often talked in this column about my fear that Batman would be over-exposed, that they would finally go too far by making too many Bat-books or developing too many members of the Bat-family or even too many Batmen.

I do enjoy Lobo, so don’t misunderstand me. I get the Main Man, especially when he’s written by Keith Giffen. He made me laugh out loud when he was in a “Spell or Die” contest, and someone was asked to spell “mnemonic” which starts with a silent “m.” Of course, that person starts with an “n” and gets killed instantly. You have to be a grammar obsessive to get that joke, I fear.

But Lobo is just too far for me. He’s a Superman opponent, and he’s perfect for that. He’s an anti-Superman in that he’s crass, he’s strong, and he’s unpredictable. On some levels, those things can work for me with a Batman-alike.

However, it’s simply too much for me to see a Lobo-Batman. I just don’t buy it!

Given the popularity of the Dark Multiverse books, I don’t expect this will be the last “new” Batman we’ll encounter. But the luster will be off the pumpkin, as a friend of mine likes to say. I won’t enjoy these new Batmen any longer.

It just feels like they’re milking Batman for all they can at this point. It was fun for the first several hundred versions or so. But they’ve finally reached my limit with these different incarnations of the Dark Knight.

I dread to think what still might be coming our way. A Bat-Batman who resembles Man-Bat? A Batman who looks like the 1950s Batman? Are the Marvel heroes off-limits or will we get to see a patriotic Batman who carries a bat-shaped shield? Or a Spider-Batman who spins bat-shaped webs? Or even a Bat-pig who reminds us of Spider-Ham?

The possibilities may be endless, but as far as this Bat-fan is concerned, I just can’t take this any longer!

Yes, I’ll buy the books just to complete the run. But it won’t be with any enthusiasm. Maybe if they sell for lots of money in the years ahead, I’ll be glad I did it. But for now, it’ll be me just reading something to keep up with it. I’m even less-than-happy since the Joker survived Batman #100. And that includes Batman NOT getting married in Batman #50. I wanted to read something I hadn’t seen before, and a married Batman would have been interesting to me!

Sigh. I honestly never thought I’d reach this point, but here I am. I’m Batmen-ed out!