Every once in a while I encounter a comics company I’ve never heaters of, and that makes me curious about them and their books.

Well, at a recent Baltimore Comic-Con, I came across the latest of these groups, and that was AHOY Comics.

WHO IS AHOY COMICS? 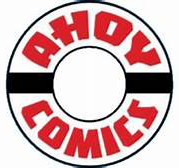 I had never heard of AHOY Comics until recently I noticed online reviews of two comics. First up was the debut of The Wrong Earth, which recently has been followed by High Heaven.

An important paragraph from that news release is the following:

“It’s time to expect more from comics,” said AHOY Comics Editor-in-Chief Tom Peyer. “AHOY Comics offers a wide breadth of contributors from the worlds of mainstream and indie comics and humor magazines. We’re publishing comic book magazines with full-length stories, backup stories, one-off gags by a bestselling New Yorker cartoonist, political poetry by a regular Poltico contributor, and prose stories by Grant Morrison, Cienna Madrid and a sundry of talent. And I don’t want it to sound too serious because these comic book magazines are both fun and funny. It really is a unique reading experience.”

Their new books are intriguing, and there are more to come this month, which I’m sure will be reviewed here at this site.

THE INDUSTRY CONTINUES TO GROW

The comics industry is still growing despite what are reported to be lessening profits. New companies appear every so often, which I think is good for comics. On the other hand, yes, the cost of printing, including paper and shipping, continues to rise while the cost for individual issues remains about $3.99 per issue most of the time.

So, why do people continue to develop new comics companies?

One of the main reasons why this continues to happen, I think, is a lack of happiness with a lot of the industry’s current product. I’ve often stated that Batman has to return to the place he started at the beginning of a comic so a new creative team, if needed, can pick up the franchise in the next issue. It’s much like TV of the 1980s and such. You MUST be able to change creators at any time.

That means very little substantial change can happen in today’s comics. If something does take place, it’s often not permanent. It’s kind of like death in comics. It rarely ever lasts.

I think that general discomfort with today’s industry is making new companies like Ahoy gain traction with readers. Also, Indie comics are unlike the big producers in that they can make major changes in their characters and their situations at any time because they’re not making Underoos with their characters on them.

I think it’s a healthy thing for the industry because it can challenge the more established companies to make changes in their storytelling they might not otherwise make.

What does it mean for comics in general? Again, I think any real step forward is important. I mean, I enjoyed The Wrong Earth #1. This six-issue miniseries is based on a concept many fans have asked over the years: Would Adam West’s Batman arrest Christian Bale’s Dark Knight if they ever met? It’s great to see someone tackle that one!

Tom Peyer has a history of making comics that are somewhat challenging, at least. And we can stand more of that!

So, if you haven’t checked out AHOY Comics, I recommend you give them a try. You can let your local comics shop know of your interest!