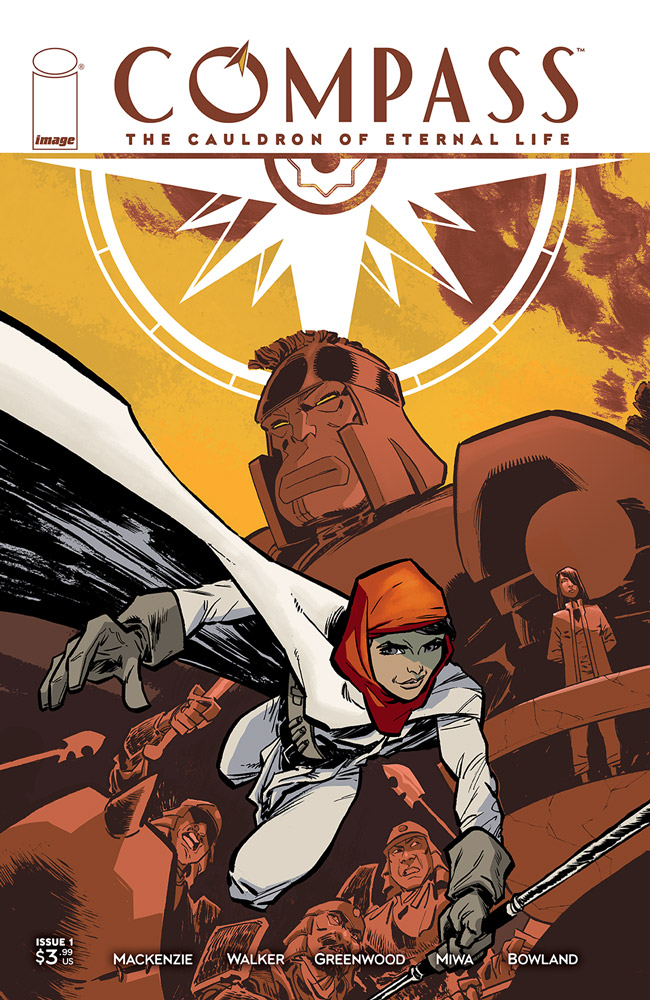 (The Old Guard), writers Robert Mackenzie and Dave Walker (Lazarus Sourcebook) team up with artist Justin Greenwood (Stumptown, The Fuse, The Last Siege) to take readers on a breathless journey in the forthcoming Compass. This all-new, five issue miniseries will launch from Image Comics in June.

“Compass was born out of our desire to tell a story of discovery without colonialism, of adventure without exploitation—something with the verve and energy of the pulps, but with a perspective that hadn’t been seen much in that genre,” said Mackenzie. “Getting there was its own process of discovery, and it’s been a joy to work with co-creators who have the talent to truly unearth Shahidah‘s quest. I’m so pleased to be able to share Compass with the world.”

In Compass, readers meet Shahidah El-Amin, a main character who is many things: scholar, cartographer, astronomer, mathematician, scientist, explorer, adventurer, and—when need be—two-fisted fighter. Setting out from Baghdad’s legendary House of Wisdom during the Islamic Golden Age, Shahi’s quest brings her to 13th-century Britain…where the Welsh are whispered to possess the secret of eternal life. But Shahi’s not the only one after it…

“This story has been with Robert and I since our earliest days writing together. We wanted to step into a world that felt definably real—but still with the thrills of haunted ruins, ancient wonders, deadly rivals,” said Walker. “Justin found that world immediately and brought it to life, and Daniela, Simon and Greg have all added their inimitable touches to truly make it something special.”

Greenwood added: “Compass has just the kind of energy and fun that I’d been looking for in a new project. The sense of adventure is palpable in every issue and Shahi is one of the most engaging characters I’ve ever gotten to draw. Compass being a teen book is also a big bonus for me creatively, as my kids are finally getting old enough to read comics too. I’ve always enjoyed this type of pulpy action comic but being able to share it with my family is a new and gratifying experience. Very excited to share what this talented creative team has been cooking up.”

“I fell in love with Dave and Robert’s idea the moment they shared it with me. I love stories rooted in historical truth, in facts that have somehow been overlooked or—more frequently, I think—ignored in favor of another, more ‘traditional’ narrative,” said Rucka. “As much as Compass is an action-adventure with all of those wonderful pulp elements I adore, its engine is personal and intimate, ultimately about the friendship between two very impressive, very capable women from two very different backgrounds. As soon as I realized that, I knew Justin was the only artist who could deliver what Dave and Robert were after. I’m very proud to claim a very small part in making this book come to life.”

Compass #1 will also be available for purchase across many digital platforms, including Amazon Kindle, Apple Books, comiXology, and Google Play.