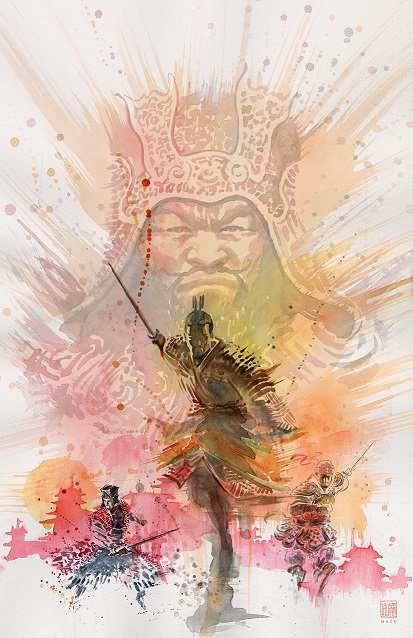 David Mack was nominated for an Emmy award for his illustration of the gorgeous opening sequence of Jessica Jones and is perhaps equally well known for his work on Kabuki, Daredevil, and American Gods. More on him and all the other contributors to the webcomic is to be found below.

The new webcomic details the events leading up to Total War: THREE KINGDOMS, and is thus of potential interest both to fans of Total War and fans of the period.  The comic introduces all of the major players in Total War: THREE KINGDOMS, covering Dong Zhou consolidating his power, Cao Cao’s betrayal of Dong Zhou and subsequent narrow escape from Lu Bu, the beginnings of a coalition against Dong Zhou, and more, ending in the famous peach garden oath.

The Creators of Total War: Three Kingdoms (the webcomic)

SEBASTIAN CHENG is an acclaimed Malaysian-American comic book colorist and digital painter. He works with clients worldwide, including Blizzard Entertainment, IDW Publishing, Titan Comics, Penguin Random House, and Upper Deck. He is best known for his work on the World of Warcraft comic series by Blizzard Entertainment. Additionally, his work includes The X-Files, Orphan Black, Revolution, Call of Duty, Transformer, along with independent creator-owned projects Boy1, The Chimeran and Redshift.

SUNSHINE BARBITO is an up and coming writer and editor, based in Portland, Oregon. She writes fiction and non-fiction short stories, poetry, and comics. Selected writing works by Sunshine can be found on her website, lookalivesunshine.com.

DAVID MACK is the Emmy nominated, New York Times Best Selling Author & Artist of KABUKI, writer of Marvel’s Daredevil, cover artist of Neil Gaiman’s American Gods, Jessica Jones and Fight Club by Chuck Palahniuk. Cultural Ambassador for the US State Dept. Mack created artwork for the opening titles of the new Jessica Jones Netflix TV series, winner of the Peabody Award, based on the book he was co-collaborator on. Mack’s comic book work has garnered nominations for ten Eisner Awards, four International Eagle Awards, and both the Harvey and Kirby Awards in the category of Best New Talent, as well as many other national and international awards and nominations. Mack received nominations for both the Writers Guild of America and the Producers Guild of America. In 2016, the US State Dept. honored Mack as a Cultural Ambassador and was selected to travel abroad to teach storytelling in other countries. In 2018 Mack was honored with the prestigious Inkpot Award for his Achievements in Comicbook Art.

Since 1977, CLEM ROBINS has lettered practically everything, for practically everyone. He is the author of The Art of Figure Drawing, which was published in 2003 by North Light Books. His paintings and drawings are in collections all over America, and in the permanent collection of the Cincinnati Art Museum.

ANDRE SIREGAR grew up in Bojonegoro, a small city in East Java, Indonesia. His parents were doctors, but his mother also has a love for drawing and painting. Andre went to college in Surabaya, where he met his wife, got married, and had two, cute kids. After getting married, Andre opened a comic shop selling American comics from Marvel, DC, and others. A local artist visited his shop and told him that making comics is hundreds of times better than selling them. In 2009, the Indonesian Economy collapsed, and Andre was forced to close his shop. But from then on, he started teaching himself to draw comics and has become a professional artist.