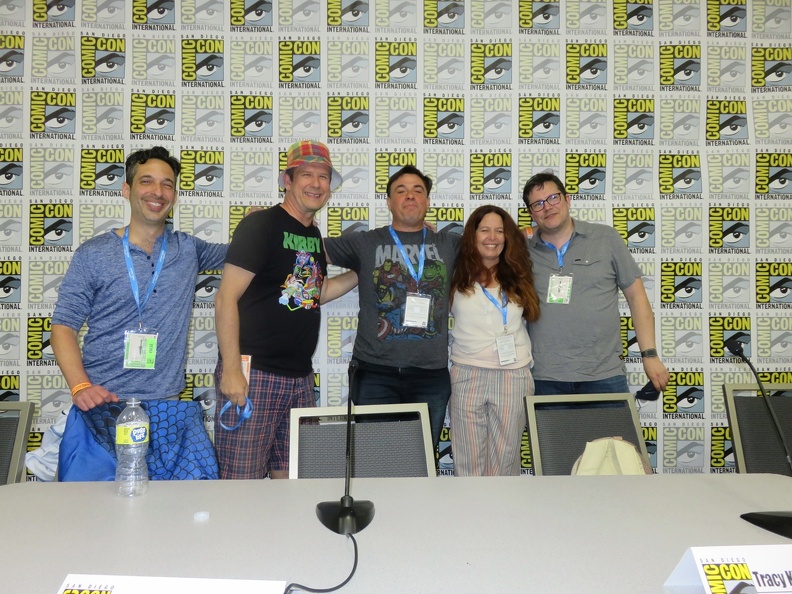 The Universal Cinematic Influence of Jack Kirby (50:31, 115mb)
On the panel was Rand Hoppe, Tom DeSanto, Tracy Kirby, Ashley Miller and moderator Mike Cecchini. They started off with a video from Mark Hamill discussing Jack Kirby. Tracy spoke about Jack and watching him meet people and give his time to them. She also spoke about what Jack liked in terms of movies and what he would have thought about today’s movies and what he did think about some of the older bad movies featuring his characters. Tom discussed “getting it right” while doing X-Men and how the X-men movie saved Marvel from getting broken up and all the characters individually sold off to the highest bidder. Ashley talked about bringing Jack’s work into the movies. Rand brought up several links between Jack’s work at Star Wars. Tracy reminisced about seeing the Star Wars toy prototypes as a kid as they hired Jack to work on them. They also spoke about James Cameron and other directors and designers being influenced by Kirby. They said Jim Starlin admitted to swiping from Darkseid to create Thanos. They brought up other movies and how used Jack’s work and paid a small tribute to Barry Geller for the Lord of Light work that Jack did.