‘Morrison Hotel’ Graphic Novel to be Released October 13, and Available to Preorder Now Through Z2 and The Doors Official Webstore 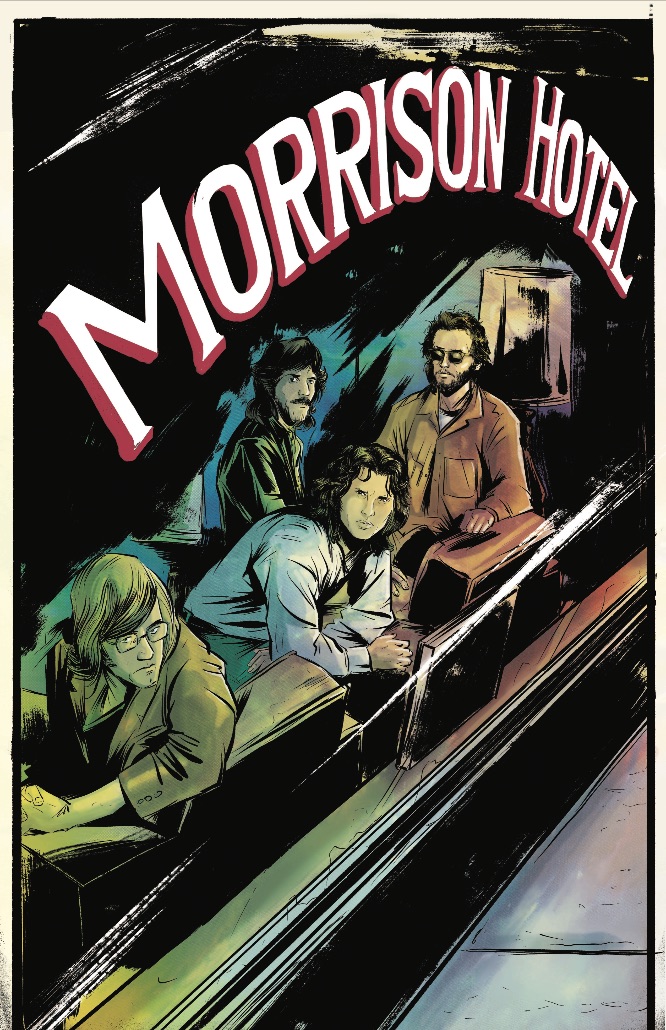 NEW YORK, NY—Five decades after the release of their landmark album, Morrison Hotel, The Doors and Z2 Comics announce a brand new graphic novel written by Leah Moore, daughter of the legendary Watchmen scribe Alan Moore, to be released on October 13.

With an intoxicating, genre-blending sound, provocative and uncompromising songs, and the mesmerizing power of singer Jim Morrison’s poetry and presence, The Doors had a transformative impact not only on popular music but on popular culture.

Their 5th studio album, Morrison Hotel was released in 1970 and was a return to their blues roots, which featured some of their most timeless songs such as “Roadhouse Blues,” “Peace Frog,” and “Waiting for the Sun.” The album was a critical and commercial success upon its release and still stands today as one of the band’s classic albums.

Z2’s Morrison Hotel will feature some of the lore that led to their status as the architects of counterculture, influencing artists, poets, and outsiders for generations to come, set against the backdrop of the close of the free spirit of the 1960s into the tumultuous 1970s. A decade in which women, African Americans, Native Americans, gays, lesbians and other marginalized people continued their fight for equality, and many Americans joined the protest against the ongoing war in Vietnam.

“Very few bands have had such lasting importance to American rock history as The Doors, and to be able work with them directly is unreal” says Z2 publisher, Josh Frankel. “To have been afforded the honor to add to the band’s enduring legacy with their first comic anthology further cements Z2’s status as the premier publisher of comics for music fans, and an honor we don’t take lightly.”

Morrison Hotel will be formatted as an anthology written by Leah Moore, in collaboration with the surviving members of the legendary rock band and drawn by artists from around the comic book world, each weaving the band’s influence into the 144 pages of story.

Morrison Hotel will be released in finer comic shops and bookstores everywhere on October 13, with a special deluxe limited edition available exclusively through both Z2’s website and www.thedoors.com. This limited edition of 5000 copies comes bound in a beautiful slipcase, and includes an exclusive 50th Anniversary Edition 12” picture disc of the complete Morrison Hotel album.  The LP, which includes the classic “Roadhouse Blues” , will feature the original 1970 stereo mix remastered by The Doors’ longtime engineer/mixer Bruce Botnick.  The limited edition set will also include three exclusive art prints (9” x 14.5”) featuring images from the book, along with a certificate of authenticity signed by writer Leah Moore.