First Comics News: How did you get into creating comics?

Berny Julianto: I and also the creators of the NPC (Neo Paradigm Comics) like comics and make comics from a young age. We have created comic characters and made comics in used notebooks for reading among school friends. When we were adults it developed further. We create and make comics more serious for publishing in mass media or indie.

1st: How long has Neo Paradigm Comics been around and how was it formed?

Berny: NPC was established since 2006 in Surabaya. When it was still called Neo Paradigm Studio. We are working on a comic for an Indonesian classic superhero character named Aquanus created by the late Wid NS. We made many changes, adding new characters and universal reforms. We also create our own superhero characters to be published by a new publisher. But the issuance did not continue because the issuer stopped producing. Comic series such as Raga Langit, Dwipa Penjaga Pintu Astral, Lelawa and Lessus published back in 2014 in indie publishing under the banner of the NPC. Together with this publication we also publish comics such as Kanser and Shakuntala which have appeared in other publications before. Kanser is a character created by Jink (nickname of Dwi Aspitono) in the 80s. After that, I along with Gino Kasmyanto (the nickname of Kasmianto) published Ekskul Super (Super Extracurricular). This series is a reformation of the Garda comic series that was published in a children’s magazine in the 90s.

1st: You write “Raga Langit” what is the storyline in it?

Berny: Raga Langit is a story of superheroes and supervillains who get the power of metals and minerals in the form of weapons or gems from the technology of ancient civilizations that have been lost. This civilization was at the southern end of Sundaland when it was not covered by seawater from melting ice after the end of the ice age. This civilization is now buried in the Java sea. Raga Langit is a typical metal weapon belonging to Mahisa Langitan, a commander of special forces in the kingdom of Alasagung during the ancient civilization. He is the early generation of Lang Sakti. Its strength is awakened by the forging metal that forms a weapon called Raga Langit (Heaven’s Body). Besides him, there are other people who experience something similar to metal or its own generating stone. There was a rebel head named Watu Belis who was awakened by his strength and even turned into a monster called Nirawi Ghistrak. The last battle between Mahisa Langitan and Nirawi Ghistrak killed this early Lang Sakti, while Nirawi Ghistrak was successfully locked up in a prison dimension called Semsta Hitam (the Black Universe). Mahisa Langitan’s daughter, Skar Suhrah, was assigned by her father to get the successor to the Raga Langit. The person who will be the next Lang Sakti. Suhrah with his weapon called Kenanga Wesi (and She’s called as Kenanga Wesi) traveled the world for thousands of years in the form of a young woman to fulfill his father’s mandate. In the 21st century, Skar Suhrah finally met with Danang Baskoro who later became Lang Sakti in the 21st century. Besides Danang there were other people who turned out to be awakened from Raga Langit but not as Lang Sakti, as Niken Baskoro his own sister changed to nDaru, Alya his fiance became Putri Maya, while Alya’s lecturer became Bintang Hitam (Black Star). They often experience collisions with a dimensional explorer named Menak Waja, who is eyeing Raga Langit.

1st: In “Pasopati” what is the goal of this super-hero team?

Berny: Pasopati was formed when there was a joint invasion of supervillains such as Nambi, Nirawi Ghistrak, Mylos, Banaspati, Monsterist, Professor Sudarta, General Cabal and Vajra invading the world in their dimensions. The name Pasopati is derived from Arjuna’s giant killer weapon in the shadow puppet world. Pasopati was formed to prevent similar attacks in the future. This organization is funded by Satria Barani Noer-Ludwig, a billionaire owner of a multinational company Noer-Ludwig and also an alter ego of Lelawa. Pasopati consists of seven core members namely Lelawa, Lang Sakti, nDaru, Shakuntala, Lessus, Dwipa, and Garda. In addition, there are also other superheroes who are members of the reserve.

1st: In “Pasopati” what superpowers do the different characters have?

Berny: Lang Sakti has the ability to bring out bright blue plasma wings which can be used to hit, cut or as a shield. Raga Langit weapon can also slash or hit with tremendous power.

nDaru, whose name means a falling star in Javanese, can fly at supersonic speed and cause very strong impact momentum. His body can emit greenish nuclear radiation which can melt steel.

Lelawa is trained in martial arts and strategies when he was the captive of terrorist groups in the waters between Indonesia and the Philippines. The name Lelawa and the white-haired red mask come from the culture of primitive tribes on the island where Satria escaped from the terrorists who kidnapped him. In that place, he also gets a rubber-like coating material that can make him jump high. His Noer-Ludwig company developed a variety of high-tech products which he also used to help him act as Lelawa.

Dwipa is the son of a metaphysical researcher named Professor Mada. Mada and Dwipa have metaphysical abilities from birth and they continue to train until they get stronger. Professor Mada founded a foundation that is engaged in the field of metaphysical research called the Libra Project. After his father disappeared Dwipa was guided by his father’s friend called Ki Siliwangi. Ki Siliwangi met Dwipa with Mossa who gave him a self-contained kris and the strength of the Weapon Masters. This keris was inserted into Dwipa’s body so that it turned into a dark figure with a kris tattoo glowing yellow on his both arms. Dwipa’s strength has increased since turning into this figure.

Lessus gets a pair of bracelets from Professor Poerwo Adi, an academic and researcher at the Laboratory owned by Noer-Ludwig. Poerwo Adi previously got the object from an alien named Ngoh. The bracelet can turn it into a figure from the legend of the Lexus god on the planet Ngoh came from. Old Poerwo Adi feels unable to physically act like a superhero and give it to a security officer named Pradipta. Pradipta inherited the power of Lexus which turned out to be able to increase the level and appearance besides flying and was very strong to be able to create a hurricane vortex. Pradipta named his new appearance as Lessus, which in Javanese means a tornado.

Shakuntala has enormous physical strength and endurance, can fly and has special inner relationships with all kinds of birds. Shakuntala is able to gather thousands of birds to carry out massive attacks from space. This power arose after Maya Restuningsih’s unconscious journey when she went into a coma. The gift of strength given by a king in the world of dreams he experienced turned out to be truly manifest in her real life.

Garda is actually a combat technology that is conceived in an outfit from Amox alien culture. It was given to Dorian Giomitri by an escapee who arrived on earth. The clothes made Dorian by touching an Amox badge turn into a person who possessed super strength, flying and high body resistance.

1st: Who or what is Lang Sakti?

Berny: Lang Sakti is actually a nickname for the holders of Raga langit. Mahisa Langitan was the first Lang Sakti in past thousand years ago, while Danang Baskoro was Lang Sakti in the 21st century.

1st: Who are the girl and robot pictured in “Ekskul Super”?

Berny: She is Sisca Sainia Regyan Wijaya called Nonik (abbreviation from Nona Elektronik = Electronic Maiden) and his giant robot CI-6. She likes to call this robot as Si Inem (C I 6 =Se I Enam = Si Inem) Si Inem is called local for servant women. This robot has intelligence derived from the intellectual record of Sisca’s late father, Regyan Wijaya, a genius scientist.

1st: What was Garda’s purpose in forming Ekskul Super”?

Berny: Garda in his daily profession as a high school teacher gathers children who have special abilities to be trained as young superheroes. Dorian who is full of idealism wants to spread his enthusiasm after long struggling as a superhero called Garda.

1st: Does living in Indonesia create any problems for creating comics?

Berny: Creative industries such as comics have not really become an industry the size of America or Japan. Indeed, since the 90s the comic industry in Indonesia which had collapsed in 70s has risen and in recent years began to grow publications that are serious about managing comics as an industry.

1st: What is it about super-heroes that people like?

Berny: In Indonesia, the world of comics and animation is strongly influenced by Japanese manga and anime, so the type of superhero that many young people like is close to the Japanese style. The generation that grew up in the 70-80 era is indeed more familiar with local comics that are more influenced by America and Europe, so the more attached superheroes are typically western. Since the Marvel Cinematic Universe release of movies, American superheroes have begun to be liked by the younger generation in Indonesia. Managers of the comic creative industry, especially superhero comics, have also started making superhero movies. 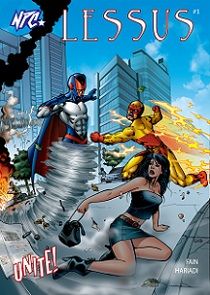 1st: How are Neo Paradign comics different than other ones?

Berny: The world of superheroes appointed by the NPC departs from ancient heritage backgrounds in Indonesia such as about high culture in Sundaland, Majapahit relics, kris, and other ancient weapons. Many of the designs are influenced by traditional decoration and clothing, although there are also modern styles influenced by American comics. Daily life that is told is an everyday environment in Indonesia such as in the village, school, the lives of young people and their cultural life.

1st: What is next for Neo Paradigm Comics?

Berny: NPCs in the future will develop cooperation for other media outside of comics such as games, animated series and do not rule out the possibility of big-screen movies.

1st: Besides Neo Paradign Comics which other ones would you recommend?

1st: Any last words for your readers?

Berny: Thank you for faithfully following the NPC comic series and hopefully we will always continue to work.

https://www.firstcomicsnews.com/rich-interviews-berny-julianto-founder-writer-neo-paradigm-comics/https://www.firstcomicsnews.com/wp-content/uploads/2019/07/Neo-Paradigm-logo-600x257.pnghttps://www.firstcomicsnews.com/wp-content/uploads/2019/07/Neo-Paradigm-logo-150x64.png2019-07-14T19:43:24-07:00Richard VasseurInterviewsRich Interviewsberny,comics,founder,interviews,julianto,paradigm,writer
First Comics News: How did you get into creating comics? Berny Julianto: I and also the creators of the NPC (Neo Paradigm Comics) like comics and make comics from a young age. We have created comic characters and made comics in used notebooks for reading among school friends. When we were...
Richard VasseurRichard.Vasseur@firstcomicsnews.comAuthorRichard Vasseur is a Canadian who has had a love of comic books his entire life. I started out as just a fan reading comics every chance I had. This evolved into writing reviews for a small newsletter which evolved into having my own column at Jazma Online and doing interviews. I also worked briefly as a columnist at Comic's Buyers Guide. Everyday I am involved with doing something comic book related and I love the hobby.First Comics News
bernycomicsfounderinterviewsjuliantoparadigmwriter