“Valhalla Awaits is a comic series that draws heavily from the Poetic Edda and Viking and Norse mythological themes. The story follows characters Hilder and Erik Blüdaxe and their journey through the Viking afterlife, where they encounter Norse gods and legendary creatures.”

Comments:  Okay, I freely admit it upfront: I’m a sucker for projects about Vikings and/or Norse mythology. And for those who know me, who know I’ve been reading the adventures of Marvel’s THOR for as long as I could read, it came as no surprise whatsoever that I had jumped on this book when I saw it show up on Kickstarter.

The book begins during the very early years of settlement on Greenland (a scant ten years after Erik the Red discovered and named it). A small village is under siege by a group of Vikings led by the powerful Erik Blüdaxe. But apparently, his coming was foretold, as a group of priests are performing a ritual intended to transform a young girl named Hilder into a Valkyrie, who would then be a champion for the village. But Erik’s early arrival disrupts their ritual, and Hilder instead falls under Erik’s sway. But truthfully, that’s just the beginning. The story doesn’t really start until the end of the first issue when both Hilder and Erik die at each other’s hands some years later. Hence why the tagline for this series is “a journey through the Viking afterlife”.

Creatively, the talent on this book is strong. Series creator and artist Phil Buckenham, aided by co-writer Joshua Metzger, writes smooth dialogue, and engaging characters. They establish well early on the link between both Erik and Hilder, while at the same time foreshadowing that there’s far more to Hilder than even she knows.

Phil’s art is, overall, well-executed and cohesive. The transitions between panels occasionally jump, but overall the vast majority of the book’s storytelling is smooth and seamless. His framing is dynamic and dramatic, and the character designs are fantastic and period-appropriate. No Vikings wearing horned or winged helmets in this project, and I love it. But if you’re a little squeamish, be aware that they are, after all, Vikings, and there’s more than an ample serving of blood and brutality. Honestly, my favorite page(s) in this story are the double-page spread which I won’t spoil for you here. There’s just something very cinematically-timed about its placement and staging. I love it.

Moving on to the other members of the creative team, the colors of Agnese Pozza compliment Phil’s art perfectly, bringing depth and vivid dynamics to the story. And as someone who himself dabbles in lettering, I really appreciate Josh Birch’s skills in these pages. There is a 100% professional quality to his work that would be perfectly at home on a project from one of the Big Two publishers. I’ve experienced a couple of projects where the lettering and balloons are sub-par and as surprising as it may be to some, nothing pulls me out of a project faster than bad lettering. It’s distracting and ruins both the flow and dynamics of the art and story.

So, in conclusion, do I recommend this book? Absolutely. Without hesitation. It’s not yet available anywhere outside the Kickstarter campaign, but they do have a store on IndyPlanet, so I’d imagine once things are settled the book will go up there for widespread sale.

Honestly, I could probably go on and on (because…Vikings), but I’ll stop. Suffice it to say, I’m on board for this series, and will eagerly be looking forward to the next issue when they decide to make it happen. And I recommend you do, as well. 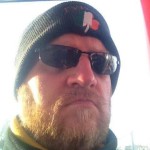