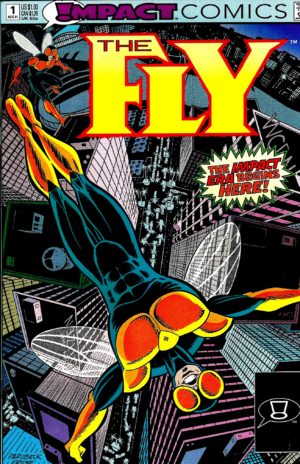 This week, I’ll take a look at The Fly # 1 which is one of the titles that help kick off Impact Comics, an imprint where the Archie Comics characters were placed under DC Comics.

Jason Troy is just your typical high school student who gets a homework assignment to create a hero for the 90s and even though he succeeds in turning in his homework, the substitute teacher responsible for the assignment gives him a mysterious talisman (A fly trapped in amber) that suddenly transforms him into the hero he created (Jason creates a hero who’s half-human and half-fly- Coincidence?!- I think so) and he becomes…..The Fly! He does well in a battle with a villain named Burnout (who’s doing the bidding of Arachnus and his henchman, Chromium) and takes joy in his newfound power but when it’s all said and done, Jason is still a boy in a man’s body.

Right off the bat, this series has that Silver Age feel to it when it comes to a teenager gaining superpowers and doing his best to understand the responsibility that comes with those powers which I think resonates with the fans that were attracted to this title when it debuted back in the 1990s. Len Strazewski is known for taking such vintage characters (Such as The Justice Society of America) and making them relevant in an era where comic book characters have to be extreme and hardcore in order to attract readers. For this series, Strazewski gives the readers a comic that not only celebrates an extraordinary era long gone, he succeeds in fleshing out his characters so that they’re not watered down but they’re as real as they come. Mike Parobeck’s artwork tends to be very animated, but I feel that his style definitely works for this series as every page comes off as vibrant and alive which makes it stand out amongst the various Impact titles of that time.

The Fly may very well be looked at as “Shazam Meets Spider-Man” but I feel that’s not a bad thing nor should it be looked at as one. It’s a fun series that showcases heroism in a lighthearted way that not only makes Joe Simon proud but will definitely bring back fond memories for anyone who loves reading about the Archie Comics characters….and that’s always a good thing to behold.

Well, that’s it for me this week. Thanks for sticking around and I’ll be back with another review from the Impact Comics era.