The first five years of my relationship with my wife–a converso–conversa?–were spent with her constantly apologizing for the awful things I say to people, and annually trying to get me to attend High Holy Days services at a shul of her choice.

She finally stopped apologizing for me when she realized that although she knew I meant every word I said, unfiltered as I am, everyone else assumed I was just kidding. Nobody would say such a thing, right?

For the record, I never kid. Some have tourettes, I have fourettes.

And she finally quit trying to drag my ass into a synagogue when the futility of this mission became obvious with my insistence that “I’m so good at being Jewish, I don’t have to practice.”

I’m a devout atheist, who considers himself Jewish. Not Semitic–there’s nothing middle eastern about me–but Eastern European–from that part of the world just before Asia rears its head. This is what entitles the current spate of crypto-Nazis to question whether Jews are European at all. Some shit just never gets old, am I right?

I’m a Jew because, as anyone who pays attention to the history of the world since Jesus showed up, I’m a member of a club from which I am not permitted to resign. So in regard to faith, holidays, and other seasonal anomalies, I’m not your go-to guy.

And if the current thrust of realpolitik continues in the arc it seems to be embracing, my lack of faith seems utterly justified…unless you accept, as I do, that with all the anathema that exists among us, socially, ethnically and racially speaking, one thing remains universally constant–everyone hates the Jews. 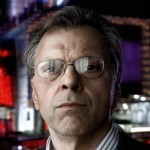 Howard Chaykin is a longtime veteran of the comic book business, serving as an artist and writer for nearly every publisher of comics in the past four decades…and counting. He took the ’90s off to work on mostly unwatchable television, so he missed the money and dreck that was comics in that execrable decade. He is responsible, some might say culpable, for introducing a number of previously unexplored themes to comic books. If you’re not hip to what that’s supposed to mean, there’s always Wikipedia.