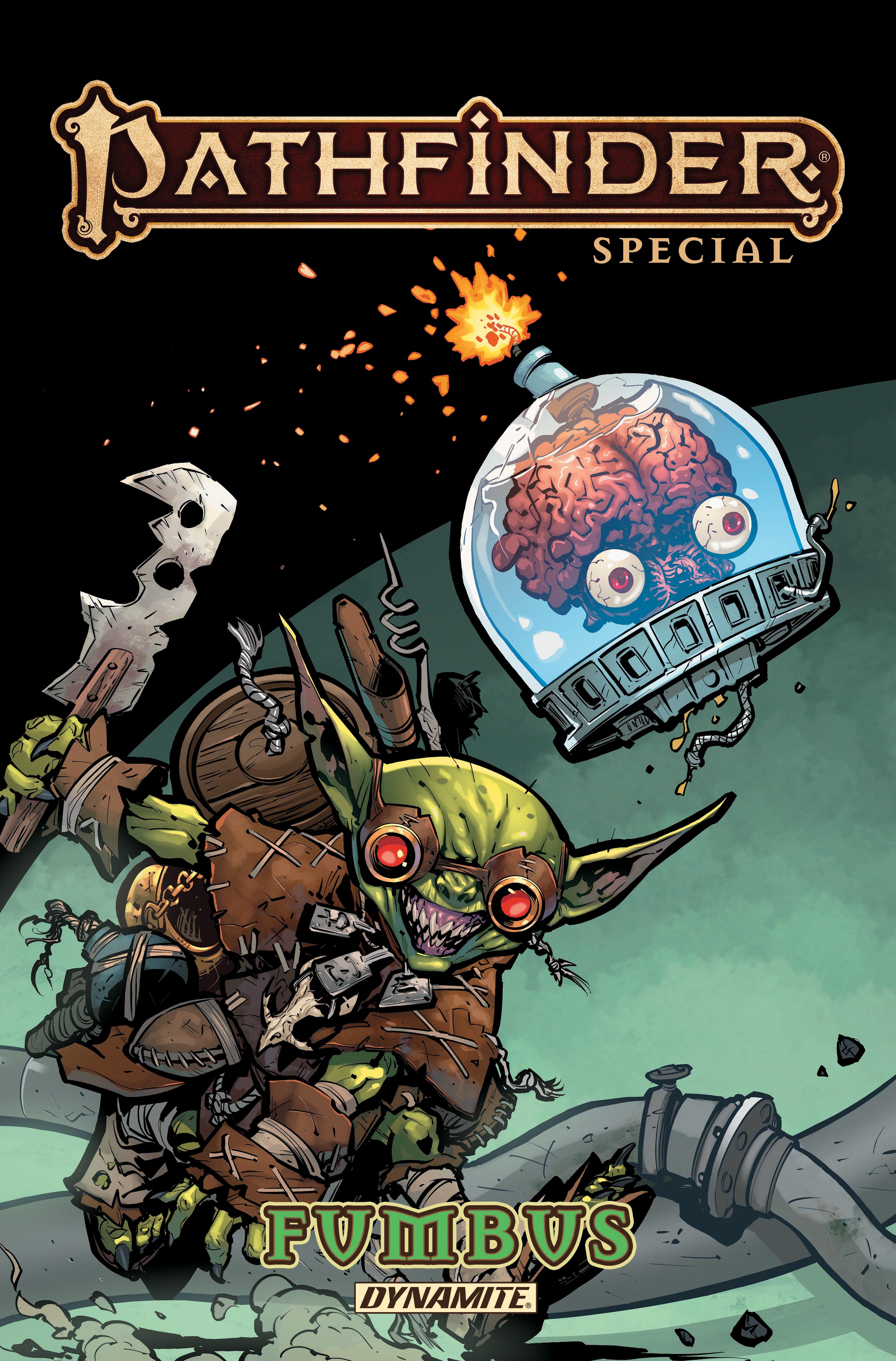 Pathfinder: Fumbus is a 40-page standalone special issue starring the riotous eponymous goblin alchemist. The mischievous goblins of Pathfinder have always been one of the iconic roleplaying game’s most signature features, but now with the new Second Edition ruleset and the added alchemist class, Fumbus takes a starring role in his pursuit to join the Pathfinder Society. With appearances from characters like Seoni, Ezren, and more, it’s a chapter not to be missed!

“Long before I got my professional start in comics, my first love was roleplaying games,” said writer Fred Van Lente. “In fact, my first published book was a supplement for Call of Cthulhu, so it feels like coming home taking the reins on the Pathfinder comic. I’ve played Pathfinder for years, including as a goblin, and it’s such a treat to add to Golarion’s lore. Expect lots of unnecessary explosions and unfortunate odors. To paraphrase a much more famous comic: Welcome to the ranks of Pathfinder’s iconic heroes, Fumbus, hope you survive the experience!”

Just like Dynamite’s previous Pathfinder titles, this comic book comes with extra content that will entice longtime fans of the RPG, with lore and scenario writing that can translate right to one’s next game night. Six whole pages of playable content, including new alchemical and magic items, rules for trapmaking, and a character sheet and stat block for Fumbus himself.

Pathfinder is one of the most renowned tabletop roleplaying games, with an ever-growing international player base. Its deep systems, expansive lore, beloved characters, and room for creativity attract fans of all types.

Those same great qualities make the world a perfect fit for comics books. Dynamite has worked closely with Paizo to produce comics for nearly a decade across 11 graphic novels. Many of Paizo’s top internal creatives like Erik Mona and F. Wesley Schneider have contributed to the titles, as well as top creators in the comics industry like Jim Zub (Avengers, Conan the Barbarian), Crystal Frasier (Immortal Hulk, Cheer Up), and Carlos Gomez (Red Sonja, America Chavez). As part of the Kickstarter pledge options, fans can stock up on the previous comics as well.

For collectors, Dynamite is offering a fun glow in the dark version of Tom Garcia’s cover, as well as a limited character sheet variant. Fan-favorite artist Ken Haeser is also doing sketch covers and remark sketches. Those looking for the ultimate Pathfinder haul can turn to the deluxe set, which comes packed with an exclusive custom D20 die, CGC graded copies of the comics, a character trading card, a set of graphic novels, and the gorgeous Seoni statue.