Mike Friedrich and E. Nelson Bridwell have been selected to receive the 2019 Bill Finger Award for Excellence in Comic Book Writing. The selection, made by a blue-ribbon committee chaired by writer-historian Mark Evanier, was unanimous.

“Once again, we have two winners who are way past-due for some rightful recognition,” Evanier says. “Both were among the first human beings who went from reading comics to writing letters-to-the-editor that were published in comics and then on to writing the comics themselves. And both wrote some very fine comics that were appreciated at the time and appreciated in reprints—but, we think, not enough.”

The Bill Finger Award was created in 2005 thanks to a proposal by the late comic book legend Jerry Robinson, who knew and worked with Finger. As Evanier explains, “We need to point out those wonderful bodies of work by writers who have not received their rightful reward and/or recognition,” “When this award began, the late Bill Finger received almost no credit for his role in the creation of Batman. He does now, but there are still plenty of writers who have not received their proper rewards and/or recognition.” 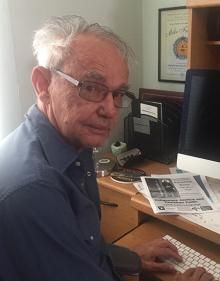 Mike Friedrich began his writing career as a teenager, incessantly writing letters of comment to comics publishers. Over 50 of them appeared in print, and by the age of 18 he was writing professionally, at first for DC with scripts for Batman, The Flash, The Spectre, Challengers of the Unknown, Green Lantern, Teen Titans, House of Mystery, The Phantom Stranger, and many others, including an extended run as writer of Justice League of America. In 1972 he moved to Marvel, where he served as writer of Iron Man, Ant-Man, Captain Marvel, Warlock, Ka-Zar, and many more. He assisted artist Jim Starlin in introducing the characters of Thanos and Drax, featured in the Avengers and Guardians of the Galaxy movies. He then shifted to the business side of comics. He was one of the first alternative comics publishers (Star*Reach, 1974­–1979), then created the Marvel Comics Direct Sales department (1980–1982), and then founded the first business management company for comics artists and writers (Star*Reach, 1982–2002). Along the way, he also co-founded WonderCon, ran retailer trade shows, and became a union representative for research scientists and research technicians at the University of California Berkeley. More recently, he attended the Pacific School of Religion, where he obtained a Master of Theological Studies degree, then was ordained by the United Methodist Church. As Mike describes it, he started out writing stories about men who put on costumes to bring justice into the world, now he puts on his own (religious) costume to bring justice into the world. 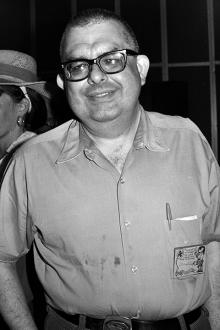 Edward Nelson Bridwell (1931–1987) grew up in Oklahoma City reading comic books, science fiction, and practically everything else he could get his hands on. His first published work was a text story in Adventures into the Unknown #9 (Feb–March 1950), and as comics began to feature letter pages, the name of E. Nelson Bridwell was often seen in them. He had a letter published in MAD #27 in 1956 and began writing for the magazine with MAD #34 the following year. He freelanced for MAD and other magazines before landing a job with DC Comics in 1965 as an assistant to editor Mort Weisinger. In addition to proofreading and handling mail, Bridwell rewrote scripts (often extensively) and wrote scripts his own for almost all the major DC features, including Superman, Batman, Superboy, Lois Lane, Jimmy Olsen, and the Legion of Super-Heroes. He also wrote his own co-creations including The Inferior Five, The Secret Six, and The Angel and the Ape, and did notable runs on Shazam! and Super-Friends. His writing was marked by a wicked sense of humor and a strong devotion to depicting others’ characters faithfully and always in accord with their established histories. All of this was in addition to serving as editor for the firm and the house expert on DC history and continuity, as well as selecting most of the stories for reprinting during his time there. When Bill Finger’s (and other writers’) names started appearing on reprints of their work, it was because Nelson Bridwell made sure they were added. He cut back his work for DC in the early eighties and died from lung cancer in January of 1987.

The Bill Finger Award honors the memory of William Finger (1914–1974), who was the first—and, some say, most important—writer of Batman. Many have called him the “unsung hero” of the character and have hailed his work not only on that iconic figure but on dozens of others, primarily for DC Comics.

The major sponsor for the 2019 awards is DC Comics; supporting sponsors are Heritage Auctions and Maggie Thompson.