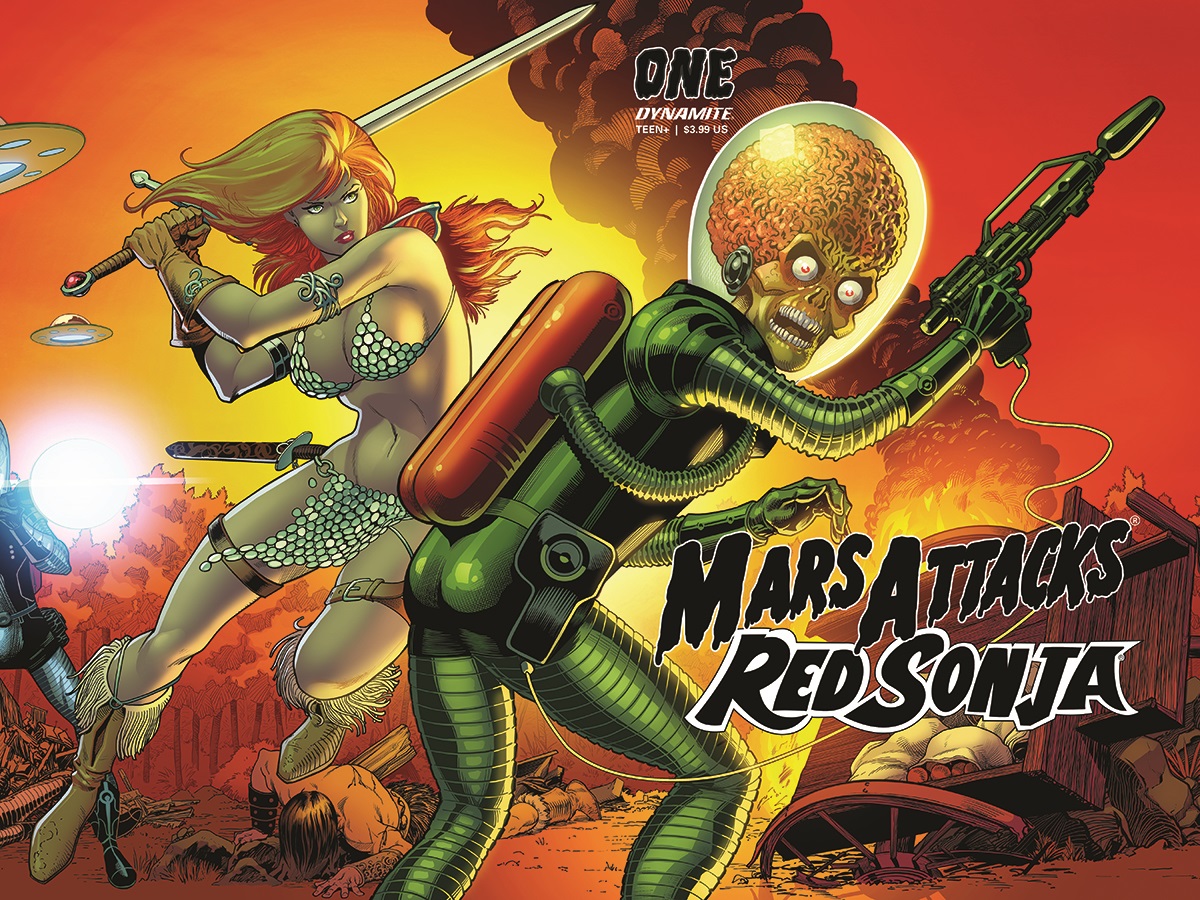 John Layman (Chew, Detective Comics) and artist Fran Strukan (The Shape of Elvira) will chronicle the untold tale of when the dastardly Martians invaded Hyrkania during the Hyborian Age. Joined by colorist Valentina Briški and letterer maestro Taylor Esposito, the team will unravel this forgotten piece of history. How do the steel and savagery of Red Sonja stand up against the advanced weaponry and science of the big-brained baddies? Only one way to find out, by reading the ACK-ing book!

“This is a book I actively pushed Dynamite to do, and I bugged them and bugged them until they finally approved it because I wouldn’t go away,” said John Layman. “I’m a HUGE fan of both properties, and the idea of mixing violent barbarian sword & sorcery with ultra-violent over-the-top retro sci-fi is simply irresistible to me.”

Fran Strukan added, “It’s really amazing the amount of luck a person can have. Growing up with certain characters and then one day – WHAM! You’re doing a crossover between some of the most beloved things from your childhood. All of that, and with a veteran writer (and fellow decapitation lover) John at the helm, it’s impossible to express the amount of excitement I have for this book.” 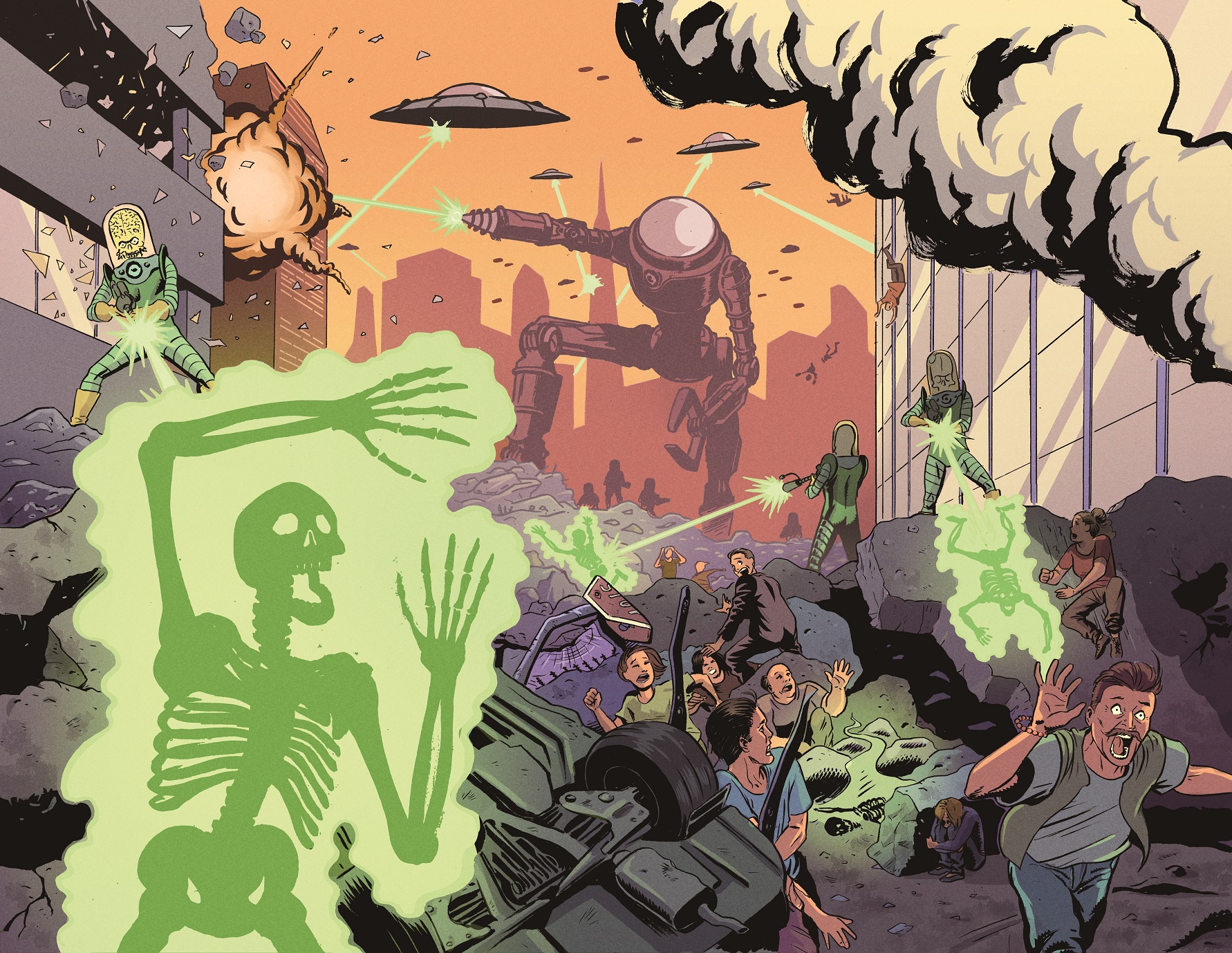 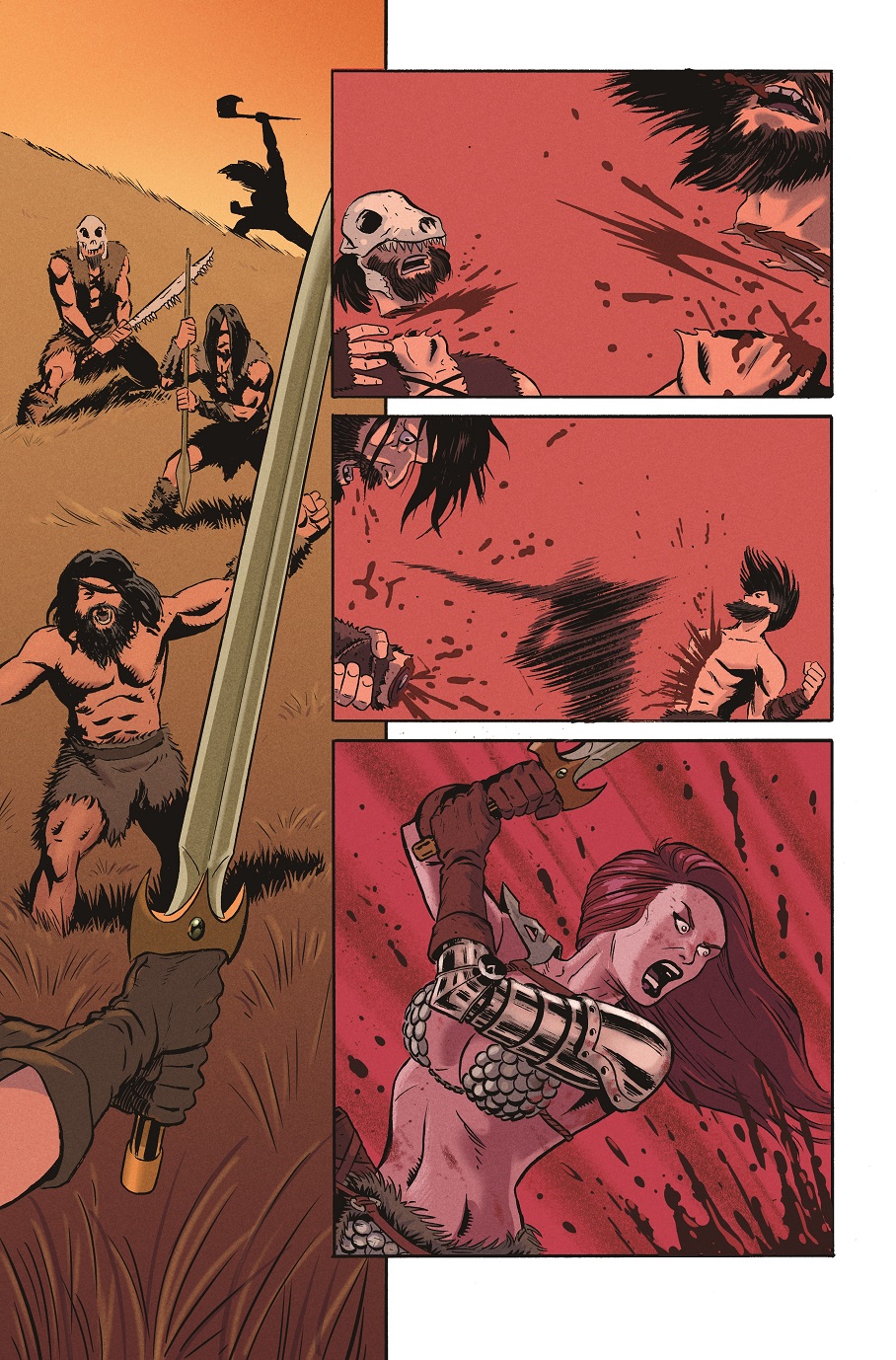 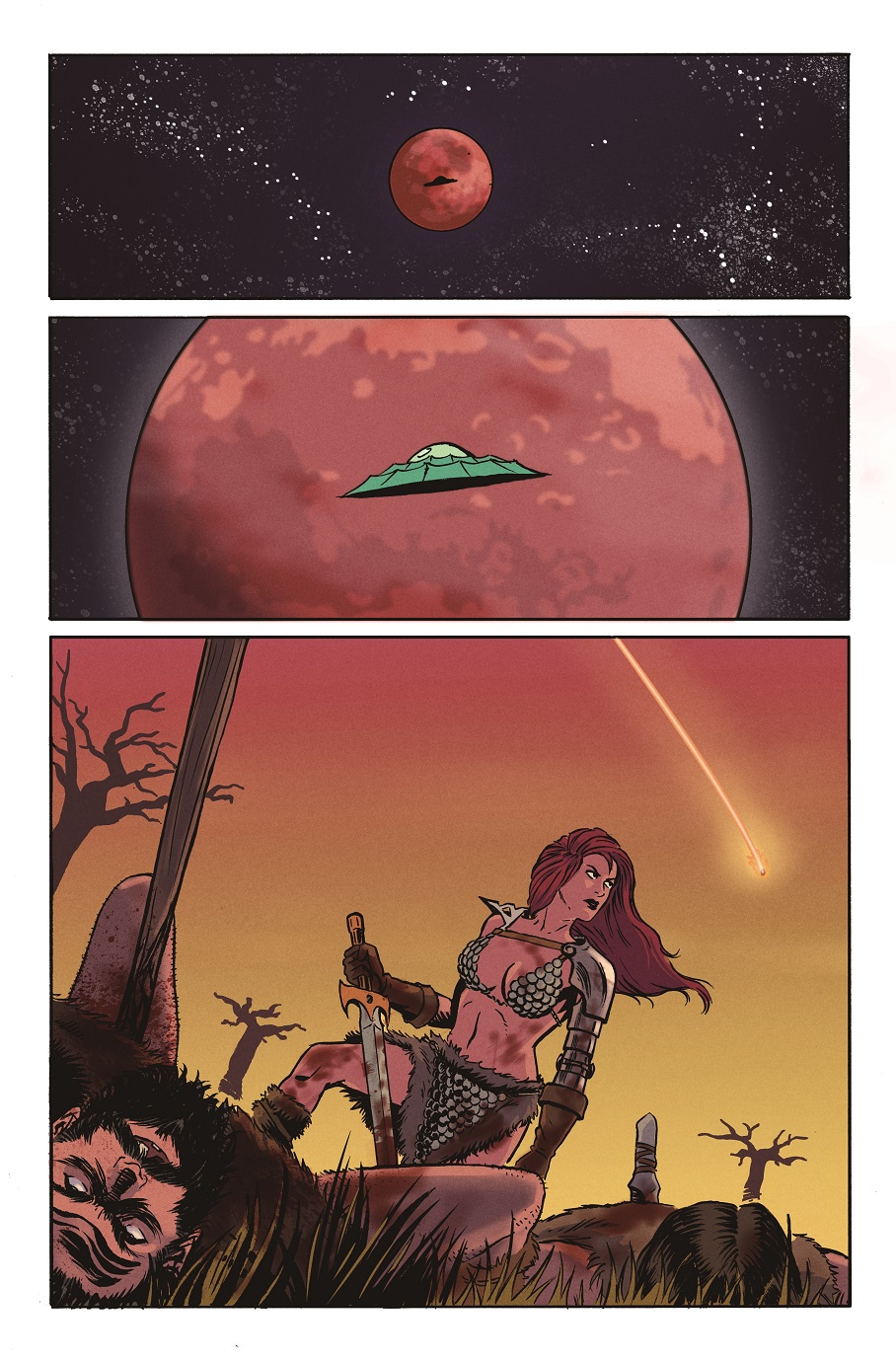 Layman returns to both franchises here following a celebrated run elsewhere on the Martian meanies and the fondly remembered early Dynamite crossover Red Sonja/Claw. He brings those connections (be on the lookout for Easter eggs!) and over 25 years of experience writing, editing, and more in comics. From his earliest days editing some of the innovative bestsellers at Wildstorm to his smash hit, multiple Eisner-winning creator-owned Chew.

The explosive first issue features a crop of covers by the coolest creators. A man very well-versed in depicting the She-Devil With a Sword is Lucio Parrillo, who highlights the menace of the Martians. Fan-favorite Dustin Nguyen (Batman, Descender) uses plenty of red and his signature style, and we’re not just referring to Sonja’s hair. Arthur Suydam evokes the classic era of science fiction that birthed the Mars Attacks franchise originally. Coming a long way from having fan art featured in an issue of Red Sonja (Vol 4 #7), is Luca Strati showing off a victorious Sonja. The legendary Barry Kitson swings through with a wraparound bursting with dynamism. And last but certainly not least is an incentive variant by Alan Quah homaging the classic trading cards. 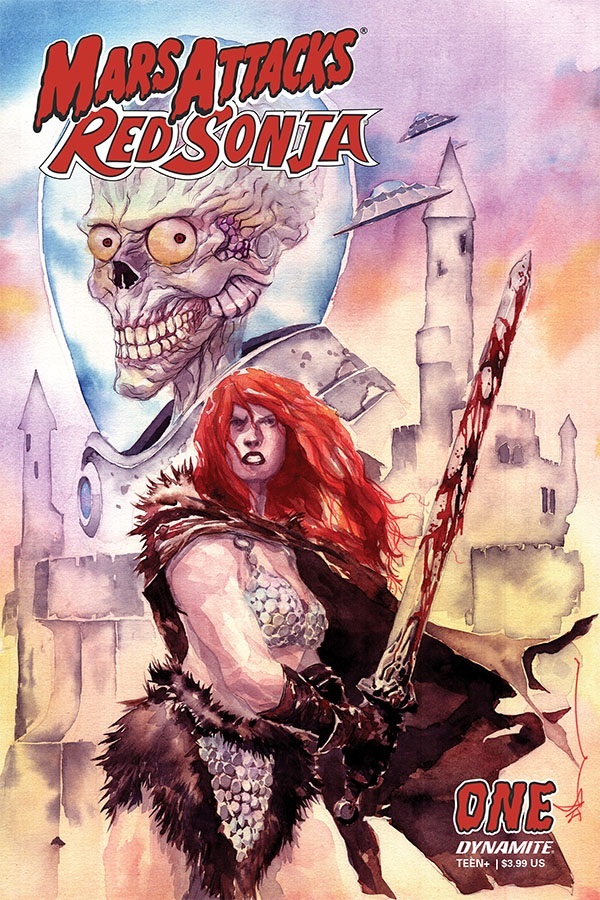 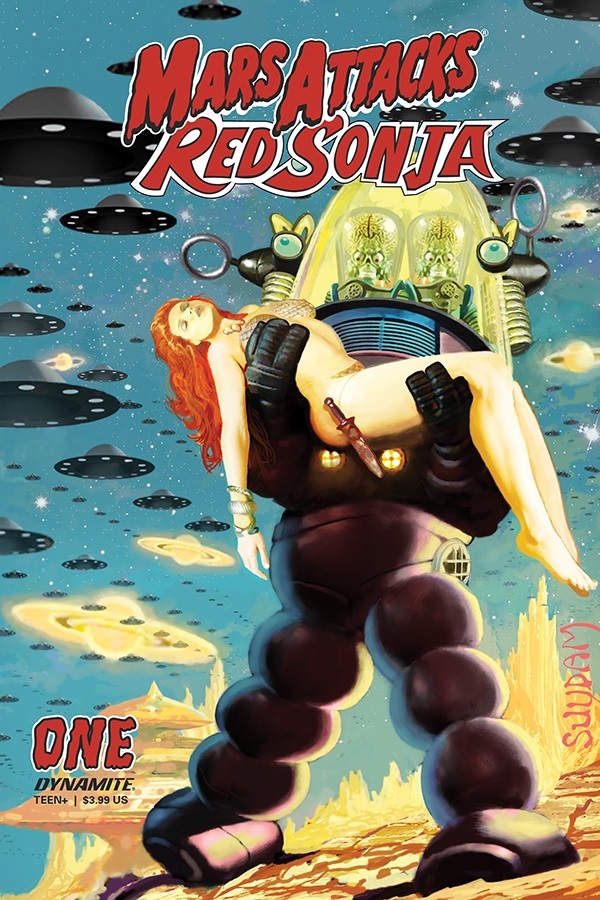 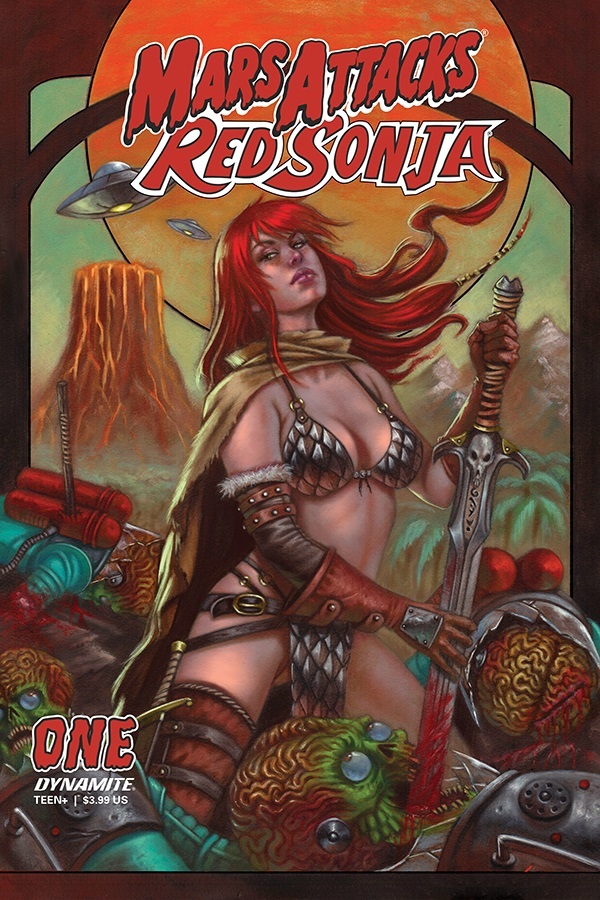 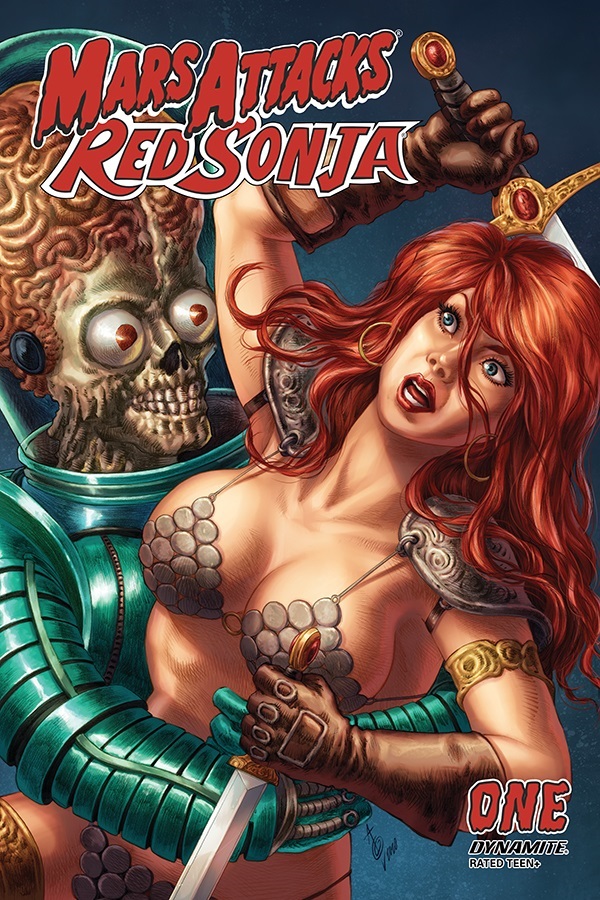 MARS ATTACKS RED SONJA #1 is solicited in Diamond Comic Distributors’ June 2019 Previews catalog, the premier source of merchandise for the comic book specialty market, and slated for release in August 2020. Comic book fans are encouraged to preorder copies of the issue with their local comic book retailers. It will also be available for individual customer purchase through digital platforms courtesy of Comixology, Kindle, iBooks, Google Play, Dynamite Digital, ComicsPlus, and more!