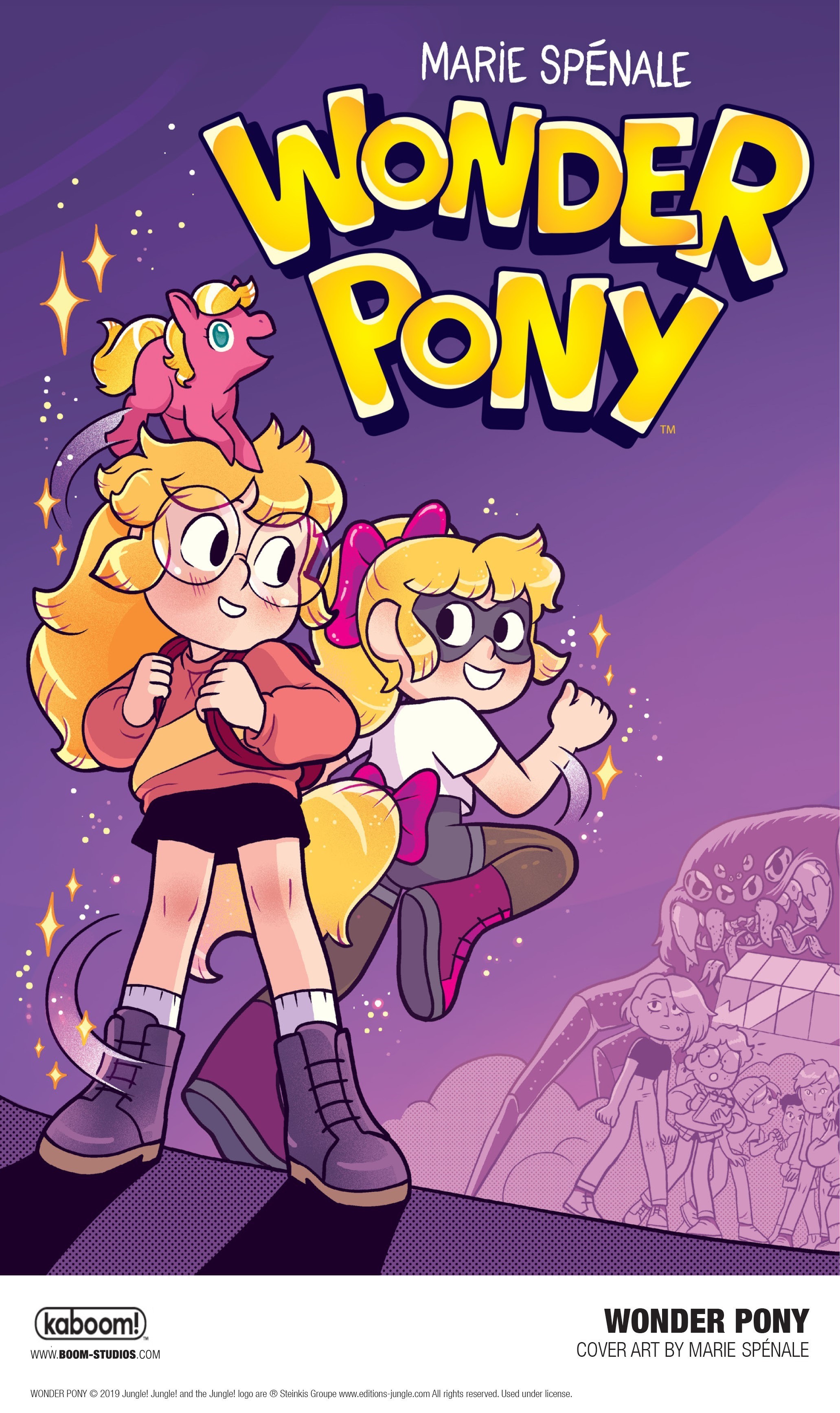 For Louison, going back to school for sixth grade looks set to be eventful to say the least . . . not only is it time to face the terrifying world of boarding school and make friends, but it turns out she has superpowers! Thanks to her friend Jean-Pierre – who happens to be a pink pony – Louison gains the ability to transform herself into a super-heroine: WONDER PONY.

Her mission? To keep watch over the school, and protect her classmates and friends from any dangers that might arise . . .

Marie Spénale is an acclaimed French illustrator and comic book author based out of Brussels, Belgium. She has worked as an illustrator with multiple European publishers and publications including Milan, Bayard, Flammarion, Hatier, Dupuis, Thanks, and Mixicom. Spénale’s first graphic novel was Heidi in Spring with Delcourt in 2017. She was nominated for the Angoulême Youth Award for the French edition of Wonder Pony from Jungle in 2018.

“Louison is a heroine I would have liked to be in sixth grade: a girl who’s a little bit shy, but courageous, and who learns to overcome the monsters that haunt her school thanks to Jean-Pierre, a tiny magic pony!” said creator, Marie Spénale. “Thanks to him, she becomes super strong and very popular. The dream, right? I hope you have as much fun reading WONDER PONY as I did when I wrote and drew it!”

WONDER PONY is the latest release from BOOM! Studios’ award-winning KaBOOM! imprint, home to comics for middle grade and younger readers including original series like Just Beyond: The Scare School by R.L. Stine and Kelly & Nichole Matthews, Hex Vet by Sam Davies, Hotel Dare by Terry Blas and Claudia Aguirre, RuinWorld by Derek Laufman, Drew and Jot: Dueling Doodles by Art Baltazar, and Pandora’s Legacy by Kara Leopard and Kelly & Nichole Matthews, as well as licensed series such as Adventure Time, Steven Universe, and Over The Garden Wall.

“Thanks to Marie’s vivid characters and incredible illustrations, every page of WONDER PONY comes alive with adventure, fun, friendship, and the sense of excitement that comes with each new school year,” said Sophie Philips-Roberts, Editor. “This book is for every kid—and kid at heart—who daydreams about gaining fantastical powers, becoming a superhero, and busting out of their classroom to go and save the day!

Print copies of WONDER PONY will be available for sale in April 2020 at local comic book shops (use comicshoplocator.com to find the nearest one), bookstores or at the BOOM! Studios webstore. Digital copies can be purchased from content providers, including comiXology, iBooks, Google Play, and the BOOM! Studios app.

For continuing news on WONDER PONY and more from BOOM! Studios, stay tuned to www.boom-studios.com and follow @boomstudios on Twitter. 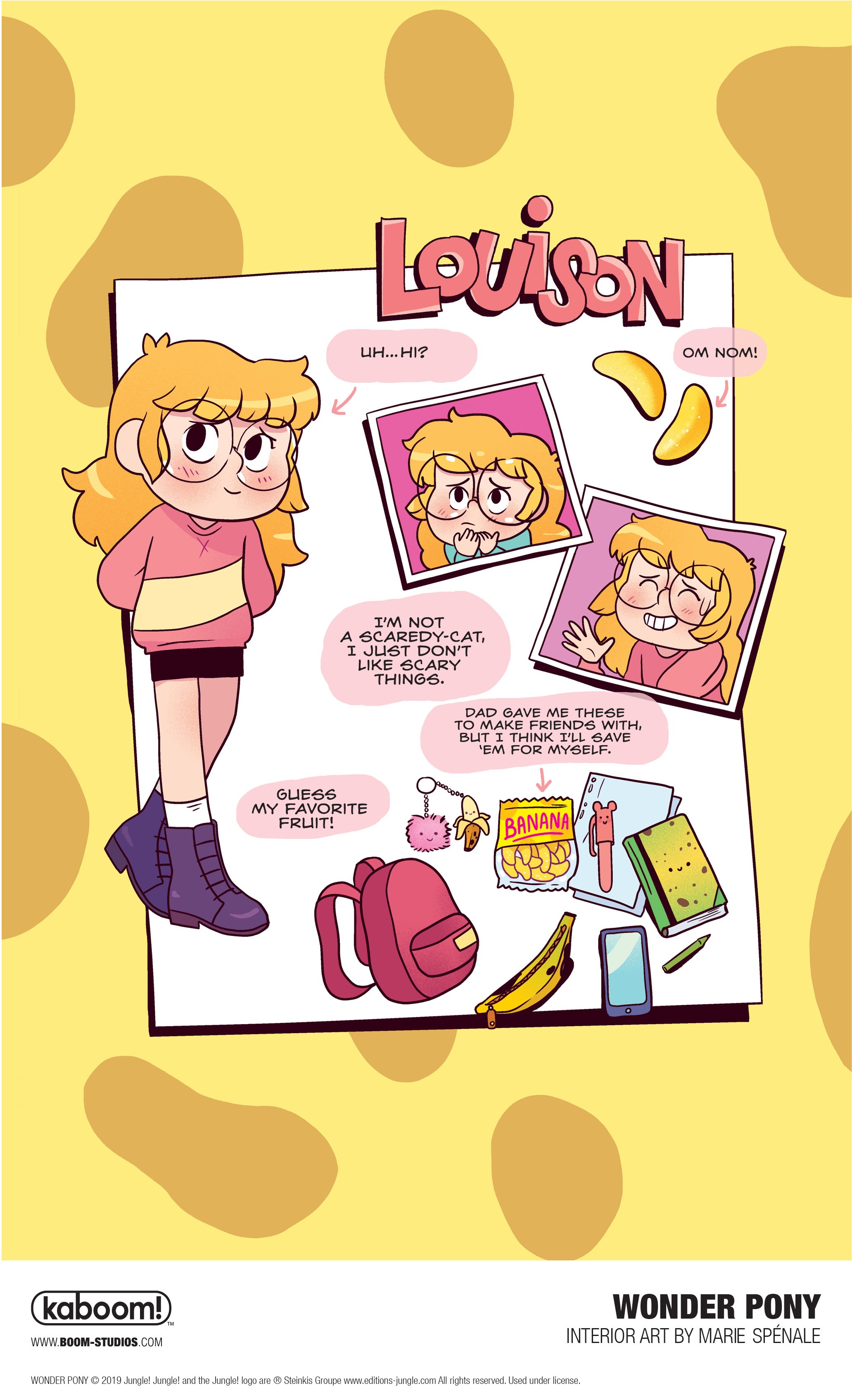 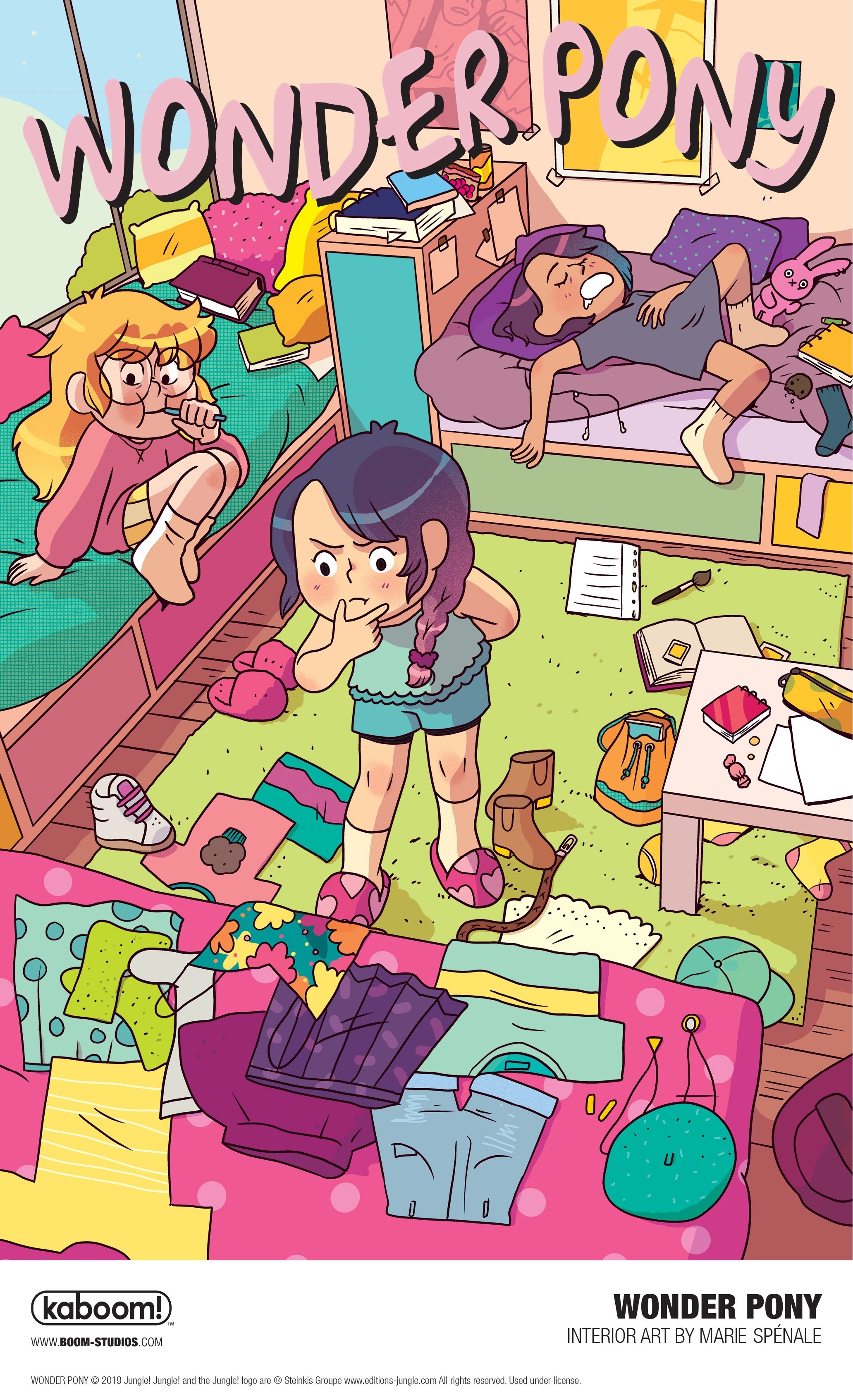