SAN DIEGO, CA (December 17, 2021) – Livio Ramondelli, the renowned illustrator beloved by fans for a decade of atmospheric Transformers storytelling, returns to his labor of love, The Kill Lock, with its first-ever sequel series entitled The Kill Lock: The Artisan Wraith. The debut comic book in this vicious and darkly funny sci-fi miniseries will arrive in March, written and illustrated by Ramondelli and published by IDW. 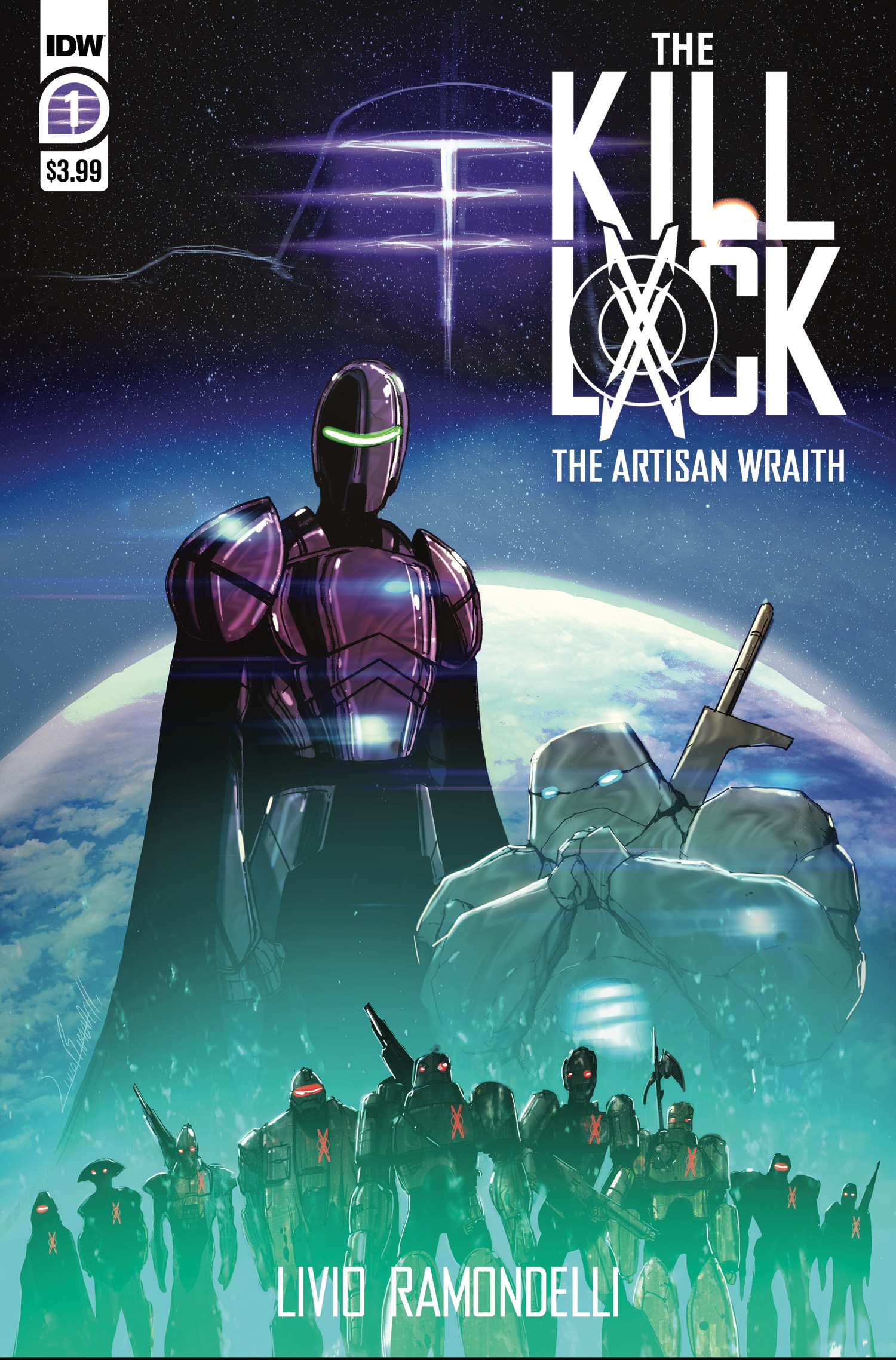 “Making the first series was one of the best experiences of my life, and I’m ecstatic that the reception to it has allowed the story of these characters and their world to continue,” says Ramondelli.

The original Kill Lock series, a captivating cult hit released in 2019 and 2020, introduced four sentient robots — a soldier, an addict, a murderer, and a child — who were bound together by a “Kill Lock” as punishment for irredeemable crimes. If one of them dies, they all will… a fate that forces them to protect each other while searching for a cure for their seemingly inevitable, linked deaths.

The new Artisan Wraith storyline picks up where the first volume left off, the four criminals having managed to escape destruction… albeit not without complications. One of their number — the smartest and most malicious — now inhabits an unbreakable body and has a planet at his command. The authorities can not let this stand, deploying two of the deadliest assassins in the universe to eliminate this threat.

“The central premise of The Artisan Wraith is: If you had both the might and the mind to remake the faults that you see in society, would you improve it or create something worse?” says Ramondelli. “The scope of this series is larger than the first, and will explore not only the future of the prior characters, but also introduce new ones as well as explore the dark origins of their universe.”

“Livio’s a great storyteller,” says IDW editor David Mariotte. “From his earliest work, he’s always had a sense of style and a knack for bringing cinematic compositions to the comics page. The Kill Lock brought him to the next level with an amazingly humorous and wickedly exciting story, and The Artisan Wraith raises the stakes again.”

Praise for The Kill Lock:

“A tale which will catch you off guard, evoke emotions you were not expecting, and pull you into its narrative.” —Major Spoilers

“I find myself so involved, invested, and thoroughly engaged from the start, and I simply do not wish the story would end. I have mad respect for Livio as he is pretty much doing it all here . . . he has opened up a world of storytelling.” —Reading with a Flight Ring

For information on how to acquire The Kill Lock trade paperback (isbn 9781684057191) and the seven-issue sequel series, The Kill Lock: The Artisan Wraith, please contact your local comic shop or visit www.comicshoplocator.com to find a store near you.

An artist celebrated among fans for his contributions to IDW’s Transformers comic book continuity, Livio Ramondelli‘s body of work includes such Transformers projects as The Autocracy Trilogy, Robots in Disguise, and Optimus Prime. He has also illustrated Darkness Visible with Mike Carey and Arvind Ethan David; the Star Trek: Vulcan and Star Trek: The Klingon Empire entries in Insight Editions’ Hidden Universe Travel Guide line; Battlestar Galactica for Dynamite; Pacific Rim for Legendary Comics; and the cover art for The Transformers: The Animated Movie Blu-Ray. In 2019, Ramondelli wrote and illustrated The Kill Lock, a six-issue miniseries published by IDW.

In addition to publishing, he provided design work and storyboards for Victory Hill Productions’ upcoming interactive “Transformers Experience” opening in Shanghai, worked for Wildstorm/DC Comics doing design work on the Sony MMO DC Universe Online, provided design for Google’s “Ingress” VR project, and worked on toy and movie designs for Hasbro. He received a Masters degree from the Academy of Art University and currently resides in Los Angeles.