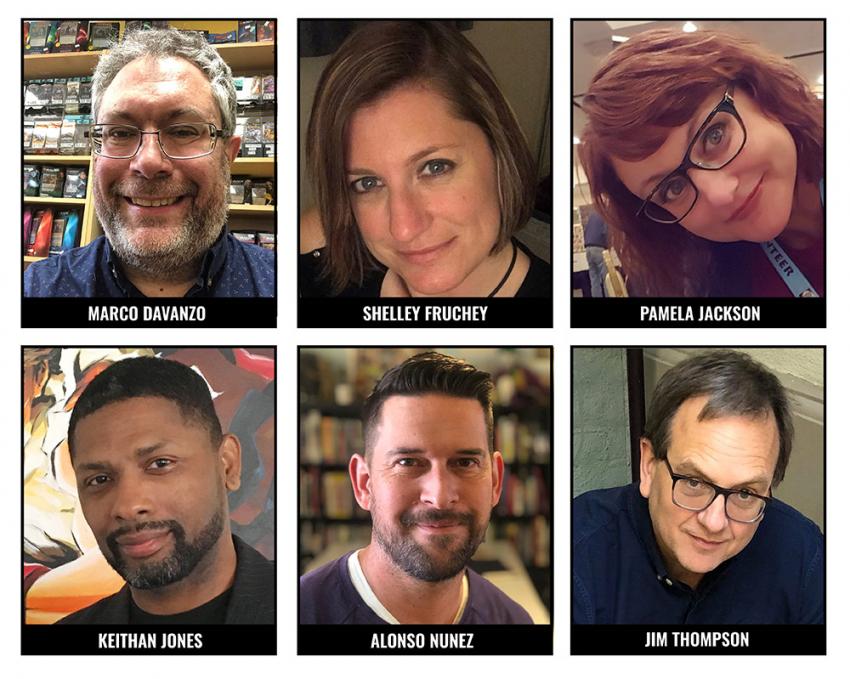 Comic-Con International is proud to announce that the judging panel has been named for the 2021 Will Eisner Comic Industry Awards, which will reward excellence for works published in 2020. This year’s judges are Marco Davanzo, Shelley Fruchey, Pamela Jackson, Keithan Jones, Alonso Nuñez, and Jim Thompson.

Marco Davanzo is the executive director of ComcsPRO (the trade organization of comic book retailers) as well as the owner of Alakazam Comics in Irvine, California. He is a life-long reader of comics (since age 7). For 25 years, Marco has sold comics and graphic novels at all different levels—from e-commerce to trade shows to storefront—and has learned what makes a comic book or graphic novel a classic. In a previous career, Marco was a business loan officer and a stockbroker for a top 5 bank. He has an MBA from UC Irvine and a BA from Princeton University.

Shelley Fruchey is a member of the Comic-Con Board of Directors. She holds a BA in English with an emphasis in Education, along with a paralegal certificate. She currently serves as the administrative assistant to the Vice Provost for Academic Administration at Point Loma Nazarene University. Shelley has been a dedicated volunteer in the attendee registration area of Comic-Con for the past ten years and is a charter member of the Comic-Con Museum. She has been a comics reader since meeting a creator who shared his library of comics with her a decade ago.

Pamela Jackson has been a library faculty member in the California State University system for 18 years. She is the Popular Culture Librarian and Comic Arts Curator in Special Collections and University Archives at San Diego State University. She manages a comic arts collection of approximately 100K published, archival, and ephemeral items. She co-created and co-leads the Comics Studies Collaborative at SDSU, where she works to include comics in the curriculum and foster the next generation of comics scholars. She has written numerous articles about comics and pop culture for academic publications and has presented at Comic-Con International, the Comic Arts Conference, San Diego Comic Fest, and the Popular Culture Association. Pam serves as the archivist and on the organizing committee for San Diego Comic Fest, as secretary for the International Popular and Comics Arts Education League, and as a member of Educators Unite for Creators Assemble!, all San Diego-based nonprofit organizations.

Keithan Jones is the founder and owner of KID Comics, an independent publisher based in San Diego. He has a BA in multi-media art from Platt College and over 10 years of experience as an art director in the field of commercial art. Growing up reading comics, Jones noticed a lack of ethnic diversity in the stories: “None of my favorite characters were Black or the main protagonist. They were sidekicks at best. . . . I wanted to see legitimate bad-azz superheroes of color that appealed to all demographics.” In 2015, Jones established KID Comics and published his first series, The Power Knights, which he had originally created in 1982 as a child. In 2017 he created San Diego’s annual Black Comix Day: Heroes Rise, a Black History Month celebration of Afro-centric comics and the artists behind them.

Alonso Nuñez is the co-founder (in 2012), executive director, and lead instructor of San Diego’s Little Fish Comic Book Studio, a nonprofit comic art studio and advocacy group. His work at Little Fish focuses on the continued placement and use of comics and comic-based curricula in schools and organizations. In 2014, Alonso began developing comic-arts curriculum in partnership with One Book One San Diego, now used across San Diego County. Alonso has served as a member of the One Book One San Diego Selection Committee since 2016, helping to select the first two graphic novels given that distinction, March (2018) and They Called Us Enemy (2020). A graduate of New York’s School of Visual Arts, Alonso’s artwork has appeared in books and publications by Kodansha, Moonstone, and the ACLU. He is currently working on his first full-length graphic novel, Hatchepsut.

Jim Thompson is an independent comics scholar, a frequent  contributor to the Comic Arts Conferences at Comic-Con and WonderCon, and a member of the Society of Cinema and Media Studies’ Comics Studies Scholarly Interest Group. He was the faculty director of the Duke University off-site program at USC from 1999 to 2016, where he taught genre theory through comics and film, and was the co-founder of  Duke’s Genre Matters undergraduate conference. He and his Comic Book Historians’ co-host Alex Grand are currently doing long-form podcast and video interviews with comic creators and industry leaders such as Roy Thomas, Danny Fingeroth, Howard Chaykin, Gary Groth, Paul Levitz, Trina Robbins, and Mark Chiarello.

The judges are chosen by Comic-Con’s awards subcommittee, made up of individuals from the board of directors, staff, and various departments. The judges are selected to represent all aspects of the comics industry. This year, in light of the COVID pandemic, all of the judges are from Southern California.

The judges will select the nominees that will be placed on the Eisner Awards ballot in some 30 categories. The nominees will then be voted on by professionals in the comic book industry, and the results will be announced in an awards ceremony at Comic-Con in July.

Guidelines for submitting material for the judges will be announced here on the Comic-Con website in early January.

The Eisner Awards are presented under the auspices of Comic-Con International, San Diego, a California Nonprofit Public Benefit Corporation organized for charitable purposes and dedicated to creating the general public’s awareness of and appreciation for comics and related popular art forms, including participation in and support of public presentations, conventions, exhibits, and museums and other public outreach activities which celebrate the historic and ongoing contribution of comics to art and culture.