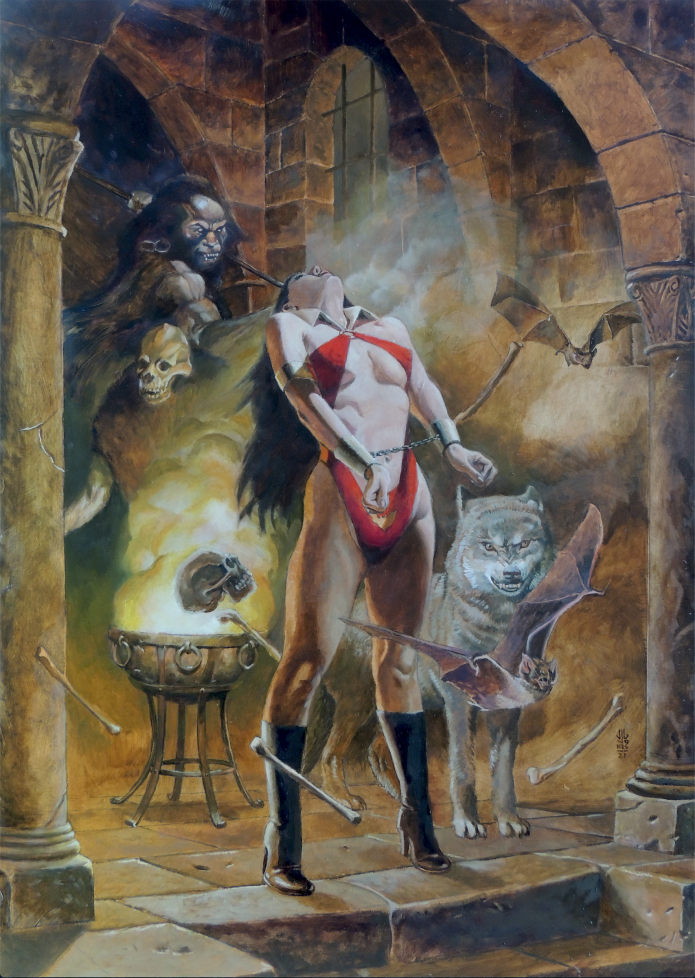 March 1, Mt. Laurel, NJ: Dynamite and JG Jones are teaming up for a breathtaking new Vampirella comic, with 100% of the limited edition variant cover profits going to Jones as he continues to recover from cancer and a stem cell transplant. Fans can get the exclusive collectible and support JG by securing their copies on Indiegogo right now.

“I’ve loved the Vampirella character since I was a kid, so when Dynamite asked me to paint a special cover for this classic horror icon, I couldn’t wait to get started,” said Jones. “Inspired by the Vampirella covers of Sanjulian, this one-of-a-kind cover will depict will depict her in classic style, as she breaks free from the chains that bind her.”

The new piece is very evocative of the character-defining covers of the original Warren magazine of the 1970s and ’80s. Such artists as Frank Frazetta, Enrich Torres, Ken Kelly, Jose Gonzalez, and Manuel Sanjulian created indelible paintings with touches of horror, fantasy, science fiction, and sensuality. For his take, Jones started with a watercolor “sketch” and then executed the final version in lush oil paint to portray Vampirella in all her glory: powerful, strong, and beautiful.

“JG is one of the most talented creators this industry has ever had. He is also one of the nicest people the industry has ever had. Hands down on both accounts,” said Nick Barrucci, Dynamite CEO and Publisher. “We’ve been creating these limited edition variant covers to help artists generate extra money during the pandemic, as there are no conventions. With JG’s continuing to recover and going two years with sporadic work, we want to help and give him all of the profits of the variant cover. He has given a lot to the industry, and this is our way of showing the industry giving back.”

To match the classic vibe, Jones and Dynamite have selected highlights from Vampirella #19 and #20 to be printed within the new book. This is a captivating one-two punch of classic stories from writer T. Casey Brennan and artist Jose Gonzalez. Plus a rare editorial feature on the behind the scenes origins of the Daughter of Drakulon!

Collectors can snag multiple variations of the cover – or a full set. Options range from the standard treatment, to a logo-free “virgin,” to black and white, and even a limited metal variant. Signed and CGC graded copies are also available.

JG Jones is one of the most critically celebrated artists in modern comics. With nearly 30 years in the business, fans have cherished his rare meticulous interior artwork, always working with the biggest writers. Jones contributed to two key standouts of the industry-innovating Marvel Knights, with Greg Rucka on Black Widow and with Grant Morrison on Marvel Boy. Other career highlights include Wonder Woman: The Hiketeia, Mark Millar’s Wanted, and the blockbuster event crossover Final Crisis.

Through his Eisner-nominated career he’s also established himself in the upper echelon of cover artists. He tackled every single cover for the fan-favorite weekly series 52. The initial year plus of Y the Last Man was graced with his covers, as well as other hit titles like Avengers, Wonder Woman, and Villains United. He’s also dipped his toes into writing, playing a pivotal role in the First Wave line. With Dynamite through the years he’s done a couple Red Sonja covers and one for Army of Darkness.

Unfortunately, in 2009 Jones was diagnosed with the rare disease polycythemia vera, a kind of blood cancer also known as a myeloproliferative disorder. After dealing with extreme fatigue and occasionally falling asleep at the drawing table, Jones thankfully sought out answers. This condition results in mutations in bone marrow stem cells, which can affect the production and status of red and white blood cells, as well as platelets. An estimated 200 thousand people in the United States deal with this challenging condition. Due to symptoms that can often be unclear, it is a widely misunderstood and misdiagnosed disease.