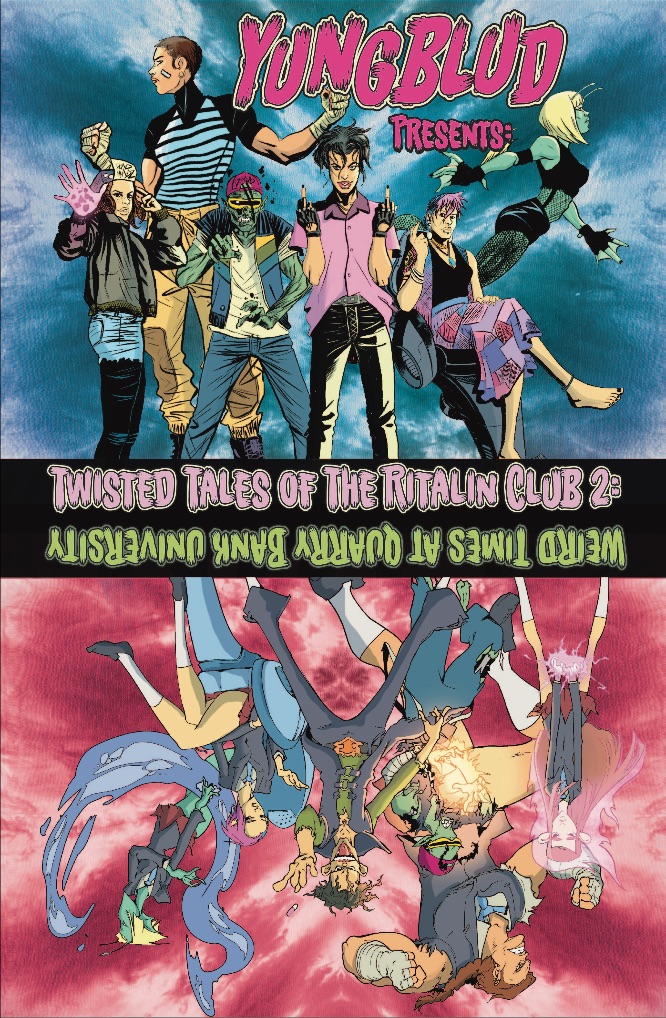 YUNGBLUD ANNOUNCES FOLLOW UP TO GRAPHIC NOVEL DEBUT!
“The Twisted Tales of the Ritalin Club” to be Followed by “Weird Times at Quarry Banks University” Available for Preorder Now!

NEW YORK, NY—YUNGBLUD’s debut graphic novel, The Twisted Tales of the Ritalin Club took the pop culture world by storm last year, selling out within days of its initial release, with fans scrambling to grab a copy. Today on his massively popular YouTube show, the young and influential English artist announces his return to comics with the sequel: Weird Times at Quarry Banks University.

From the same beautifully eccentric mind of music sensation YUNGBLUD comes the follow up to last year’s breakout hit graphic novel, again pairing him with cowriter Ryan O’Sullivan of the White Noise collective that brings all of the same delightfully dark humor back to the page in Weird Times at Quarry Banks University. Now eighteen, and having graduated from Blackheart’s High School; YUNGBLUD, plus his super-powered friends Harmony, Scout, Zombie Joshua, Em, and Encore are now enrolled as students at Quarry Bank University. At first, it seems like university life is all drugs, sex and relationship drama. But when a new foe with a familiar face arrives from the Manga Dimension, the Ritalin Club find themselves caught in a trip that may cost them their very lives!

“I wanted to start writing comics because I wanted to give my fans a genuine, physical world to fall into like I did” say YUNGBLUD. “[With the book] I wanted to amplify the idea that if you feel like you’re in a place where you don’t feel accepted, then come inside this world because here we love you for exactly who you are and we always will.”

YUNGBLUD Presents: The Twisted Tales of the Ritalin Club Volume 2: Weird Times at Quarry Banks University is co-written by Ryan Sullivan (Turncoat, Void Trip), with art by Derick Jones and Minomiyabl, and is available for preorder now in multiple editions. Visit the Z2 website now to order today in both standard and limited deluxe editions. This special 9×15 oversized book comes packaged in a gorgeous slipcase and includes an exclusive vinyl variant of the young artist’s upcoming album, with each copy signed by YUNGBLUD himself in a one-time limited edition of 1,200.

“With my music and comics I always want to be disruptive, it’s important to me. If the art doesn’t challenge you it’s not gonna change you.”

YUNGBLUD Presents: Twisted Tales of the Ritalin Club Volume 2: Weird Times at Quarry Banks University will be released later this year, and YUNGBLUD is set to appear on Z2’s Soundtrack to Fandom panel as part of this year’s Comic Con @Home programming, with further details to be announced next week.

YUNGBLUD’s impact over the past few years not only as a musician but as a cultural icon is undeniable. Sticking a middle finger up to senseless oppression the tongue-in-cheek, genre bending British rocker has been a driving force in a worldwide movement that encourages people to be distinctively themselves, and proud of it.

With his electric mix of high-octane live energy and clued up social commentary he’s sold out tours the world over and frequented some of the biggest festival stages on the planet, so it’s no surprise YUNGBLUD is well versed in the art of live performance. Breaking down the barriers between audience and performer he raises an army with one common goal: to bind with unity and inspire hope in a world consumed by unjustified hate. Where do we sign up?