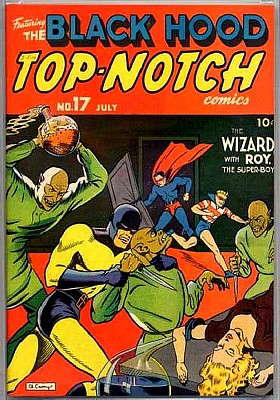 According to my copy of WEBSTER’S VEST POCKET DICTIONARY, the term top-notch means “of the highest quality”. The seventh issue of TOP-NOTCH COMICS more than lived up to that definition. TOP-NOTCH was about to begin hitting its stride with this issue. Let’s just look at what made this issue live up to the term “top-notch”.

THE WIZARD; THE must-read story of the book! Not only did we get the climax of the very first multi-title storyline in the history of comics (the Mosconian threat), We also got a team-up between the Wizard and the Shield (Ed Ashe did a good job drawing the Shield in this story) and the Wizard donned his now familiar blue and red (or purple and red depending on the colorist) costume for the very first time. A terrific climax to a story that more than manages to outdo the more celebrated Human Torch vs Sub-Mariner duel of MARVEL MYSTERY COMICS #s 8-10 (which began around the time the Mosconian storyline was wrapping up). This story makes one wish that MLJ took the next step and brought their top superheroes together regularly and had them fight against a common enemy (something MLJ’s Distinguished Competitor did, twice I might add).

GALAHAD; Although Lin Streeter was no Hal Foster, he was quite able to do a good job capturing the feel of Foster’s PRINCE VALIANT pages in this story.

STREAK CHANDLER; Although THE ROCKET AND THE QUEEN OF DIAMONDS in PEP did a much better job in capturing the FLASH GORDON feel, it comes off as a more-than-decent sci-fi strip in the mold of Alex Raymond’s celebrated strip.

WINGS JOHNSON; Like his fellow Americans – Corporal Collins and Sergeant Boyle – Wings Johnson was helping the Allies fight World War II before America got into the war, and doing a good job of it as well. I loved the detail that Ed Smalle put into this story, particularly the airplanes (which were often referred to by their model names).

DICK STORM; Another pleasant surprise story. This time helped the fine line illustrative style that Mort Meskin was employing during this period.

BOB PHANTOM; What can I say? Another excellent tale.

KEITH KORNELL; For a cadet at West Point, he certainly got around during this period. After helping smash the Mosconian threat in the previous issues, he finds himself doing some spy smashing in this story.

KARDAK; Kardak during this time was more like the more celebrated Mandrake the Magician than Mandrake was. But what Kardak was going through in this story (which incidentally introduced Balthar, Kardak’s assistant) would have given Lee Falk’s celebrated magician the heebie-jeebies.

All in all TOP-NOTCH #7 lived up to its title. Considering what would be coming up in the next two issues of the title, what was put into TOP-NOTCH #7 was just the tip of the iceberg.