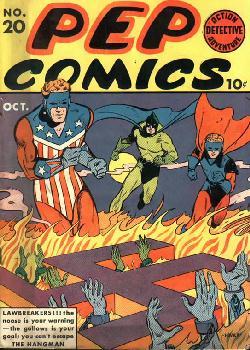 On the surface, the cover of Pep Comics #20 (cover-dated October 1941) would give the impression that there were quite a few war-themed stories because of the cover (by Irv Novick) depicting the Shield and Dusty, along with the Hangman, charging at a fiery swastika with hands in chains coming out from it (the second war-themed cover in a row). But the exception of the Sergeant Boyle story, the war was very much further in the background for the time being (the book hit the stands in August of 1941 and America was still technically neutral). Despite that fact, the book was still able to hold one’s interest as a perusal of its contents will soon see:

THE SHIELD; Some say that babies can be more trouble then they are worth, but when Dr. Wang kidnaps an infant that happens to be the king of a European country and falls into the unsuspecting hands of Ju Ju Watson, then it’s up to the Shield and Dusty to save the infant king and their friends at the same time. Harry Shorten (script) and Irv Novick (art) are the men behind this fast-paced tale that mixes humor and suspense.

THE HANGMAN: After he was defeated by the Hangman in Pep #18, the Jackal was sentenced to hang. But he ends up escaping the gallows and tries to go after the people who sent him to the gallows, including the Hangman. Joe Blair is responsible for the script for this exciting tale.

Although Joe Blair scripted an exciting story, my enjoyment of the story was hurt by two things. One being the artwork of George Storm. Though his layouts are well done and make the story move at a fast pace, his finished artwork leaves a lot to be desired (fortunately, this was his last Hangman story). The other is the presence of Anthracite, one of those unbearable African-American stereotypes that would be viewed as a racial slur by today’s readers (fortunately, he would disappear after Pep #21).

DANNY IN WONDERLAND: After getting caught in a storm, Danny – along with Kupkake and Snapper – find themselves in Neptune’s kingdom and are dispatched to rid the seas of the villainous pirate Black Bart. Lin Streeter handles this excellent fantasy tale.

SERGEANT BOYLE: In another one of those adventures that combine humor and action, Sergeant Boyle and Twerp find themselves cooking up some trouble for a platoon of Nazi soldiers. Another tongue-in-cheek adventure from Carl Hubble. watch for a cameo from a character familiar to both the good sergeant and to readers of Blue Ribbon Comics.

THE FIREBALL: In his final appearance, the Fireball goes after a crooked politician accused of setting fire to a business he was involved in. He wouldn’t return to comics until The Mighty Crusaders(first series) #4.

MADAME SATAN: For her next-to-last appearance, Madame Satan tries to obtain the soul of a young artist only to have his girl interfere with her plans. Harry P. Lucey drew this atmospheric story.

KAYO WARD: In the fourth part of a storyline that started in Pep #17, Kayo Ward has his face restored by plastic surgery and begins to put his life back together by going on the comeback trail. Harry Shorten and George Storm were the ones behind this memorable storyline.

BENTLEY OF SCOTLAND YARD: In another of cases that seem to involve the supernatural, Inspector Bentley investigates the murder of an English nobleman who is suddenly burned to death without warning. Future Archie artist and co-creator Bob Montana contributed the art for this story.