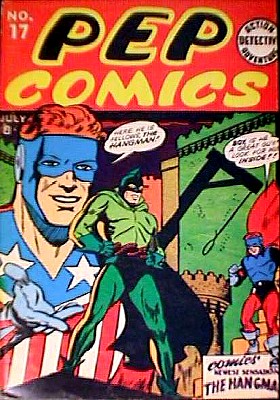 During Hollywood’s golden age, the studios were in the business of making stars. Once they found their performer, they would throw their entire promotional machine behind the performer in the hope that he/she would click with the public. Sometime the performer would click and become a major star. Other times, all the ballyhoo a studio would throw at the public would not help a performer become a star. Anyway, the studios depended on the public to help make certain actors and actresses stars.

In the comic book field, it was the same way. The publishers depended on the public to help make new stars out of the characters they created. An example of a successful star launch occurred when MLJ Magazines launched a new character called the Hangman in the pages of Pep Comics #17 (cover-dated July 1941). On the Irv Novick drawn cover, they had Pep’s major stars – The Shield and his partner Dusty – introduce the green and dark blue-clad hero on the cover and promoted the character with the following blurb; “comics’ newest sensation… THE HANGMAN”. How was the introduction? To do that, let’s start with that story which was incidentally the second story in the book:

THE HANGMAN; THE must-read story of the issue, and what a story! In his electrifying debut, we learn of the incidents that led to Bob Dickering adopting the identity of the Hangman. Particularly, the violent death of his brother John Dickering a/k/a The Comet at the hands of the mob of Big Boy Malone (the first notable superhero death in comics). The Hangman would go on to become one of MLJ’s top superheroes and would appear in Pep Comics up until issue #47 (March 1944) not to mention eight issues of his own book (which was titled Special Comics for the first issue and would become Black Hood Comics with issue #9. He would also appear in Black Hood #s 9 and 10) which ran from Winter 1941-1942 to Fall 1943. Incidentally, Cliff Cambell wrote the opening story.

My only gripe about the story is the art of George Storm. His style worked well on the two newspaper adventure strips he created earlier in his career – Phil Hardy and Bobby Thatcher – but doesn’t really work as well for a superhero strip like The Hangman. His layouts were excellent, but his figure work – which looks like he was trying to emulate Bob Kane’s work on Batman – leaves a little to be desired. Fortunately, such artists as Harry P. Lucey, Irv Novick, John Cassone, and Bob Fujitani would eventually take over the feature.

As for the story that kicks off this issue:

THE SHIELD; The book gets off to a flying start as the Shield and Dusty help a young kid named Slats stay on the straight and narrow after they catch him acting as the lookout for a gang of warehouse robbers. But the gang has other ideas for him. Another fine story from the typewriter of Harry Shorten and the pencil and brush of Irv Novick.

As for the rest of the book:

DANNY IN WONDERLAND; In the continuation of the story from Pep #16, Danny and Kupkake – along with the children they rescued from Playland – find themselves the prisoners of a one-eyed giant. And to make matters worse, they were going to be the giant’s meal. Harry Shorten and Lin Streeter deliver the goods on this story.

SERGEANT BOYLE; In another one of those wild adventures that combine humor and adventure, Sergeant Boyle and Twerp find themselves in Italian ruled Eritrea fighting the Italians and their native allies. Another story from the pen and pencil of Charles Biro.

THE FIREBALL; While looking into fire hazards on the waterfront, Ted Tyler witnesses a shootout between thugs and police that leads to him going into action as the Fireball and uncovering a drug-smuggling operation. Paul Reinman delivers the goods on the artwork.

MADAME SATAN; In her second appearance, Iola a/k/a Madame Satan tries to corrupt the soul of Carl Janssen and ruin his life. Joe Blair and Harry P. Lucey deliver the goods in the first part of a two-part story. This story also introduced Madame Satan’s most frequent adversary, Brother Sunbeam.

KAYO WARD; In the first part of a four-part storyline, Kayo ward is about to marry Connie Hodges when his face is hideously scarred by a fire caused by a boiler explosion and he chooses to leave rather than be an object of pity. In the first installment, Kayo finds himself raising money for a hobo named Rip so he can be hospitalized for tuberculosis. To do so he had to get into a boxing match with a local champ. Here, George Storm’s artwork is far more effective for this feature than it was for the Hangman. I’m probably giving his work on Kayo Ward more leeway because the most prominent boxing strip of the time – Joe Palooka – was drawn in a more cartoony style.

BENTLEY OF SCOTLAND YARD; In a wartime mystery, Inspector Bentley investigates the murder of a prominent British general. Once again the team of Joe Blair and Sam Cooper deliver the goods on another intriguing mystery.

Pep Comics #17 would have been an interesting issue alone for the introduction and origin of The Hangman. But looking at the book as a whole, it was another one of those books that was a great read from cover to cover. And that’s not studio ballyhoo.