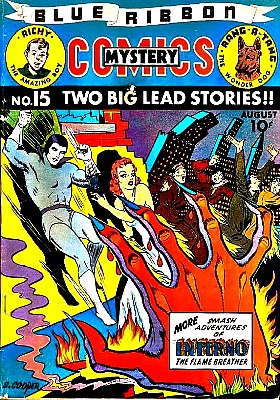 By the time Blue Ribbon Mystery Comics #15 (cover-dated August 1941) hit the stands in June of 1941, America’s view of what was going on Europe was changing. There were calls for America to enter World War II on the side of the Allies, particularly after the news of Nazi Germany’s invasion of Yugoslavia and the beginning of Germany’s invasion of the Soviet Union (not to mention the atrocities committed in China by the Japanese invaders). It was this attitude that made at least three of the stories in Blue Ribbon #15 very topical. After we get past a classic Sam Cooper cover, we’ll take a look at those three stories and the rest of the book:

MR. JUSTICE: This issue of Blue Ribbon gets off to a great start as Mr. Justice continues his battle against the Devil – disguised as a certain dictator – and his minions. In this story, the Royal Wraith tries to trick the dictator’s three top henchmen into trying to dispose of each over. Joe Blair (story) and Sam Cooper (art) get the book off to a flying start. In a coincidence straight out of Citizen Kane, the foreign minister – Von Fibbenfof – is a dead ringer for media mogul William Randolph Hearst.

RANG-A-TANG: After returning to Hollywood after their tour with a circus, Rang-A-Tang and his human partners – Hy Speed and Richy Walters – break up a bank robbery only to end up with Hy Speed being framed for murder. Writer Willard Fallon and artist Ed Smalle, Jr. deliver the goods on this story. Incidentally, this story introduces two new supporting characters, Linda Lane and would-be private eye “Trigger” Quick.

THE FOX: The Fox finds himself investigating a series of gangland killings only to find out that the rub-outs were part of a murder-for-hire racket. Warren King delivers the goods on this story.

CORPORAL COLLINS; INFANTRYMAN: In the second of the three topical stories I mentioned in the introduction, Corporal Collins and Slapsie try to get som r&r in Yugoslavia only to try to intercept a phony treaty that would have allowed a Nazi takeover of Yugoslavia. Charles Biro once again delivers another one of those stories that combine adventure with humor.

TY-GOR; Joe Blair and George Storm once again deliver another wild adventure featuring our modern-day Mowgli. Here Ty-Gor is with the Boy Scouts and finds himself involved with a gangster and a cache of dynamite.

INFERNO: After finding a murdered FBI agent on a beach, Inferno finds himself in a mystery involving a gambling ship and a lady in black. Paul Reinman delivers on the artwork for this story which introduces FBI agent Virginia Ames.

LOOP LOGAN: in the third of the topical stories in this issue, Loop Logan and Clatra head to Yugoslavia to destroy a Nazi built bridge.

THE GREEN FALCON: For his final appearance in Blue Ribbon, the Green Falcon and his men restore King Richard to the throne only to find Prince John has stolen the royal treasury.

Looking at the contents of Blue Ribbon #15, not only did we get three very topical stories, but we also got some other entertaining features as well. But that was only scratching the surface because the next issue would introduce another very significant feature – Captain Flag – and the book would really begin to hit its stride.