(BALTIMORE, MD) — (October 14, 2019) — Any MST3K fan will recognize music as a core component of the cult classic series. The show’s timeless theme song and musical interludes are as iconic as the show’s robots and bad movies. Now fans can own the music of MST3K on one beautifully rendered PREVIEWS Exclusive Moon printed vinyl from Shout Factory and Diamond Comic Distributors.

Long out-of-print, the classic MST3K soundtrack returns! This limited edition, double disc release includes all-time classics like (Let’s Have) A Patrick Swayze Christmas and Where, Oh Werewolf and a collection of theme songs from throughout the show’s original run, packaged in a brand-new cover illustration by Steve Vance.

The PREVIEWS Exclusive MST3K Clowns in the Sky Soundtrack (SEP198031, SRP: $40.00) is now available for pre-order at comic shops, with an expected release date of December 18, 2019. To find a comic shop near you, visit www.comicshoplocator.com. 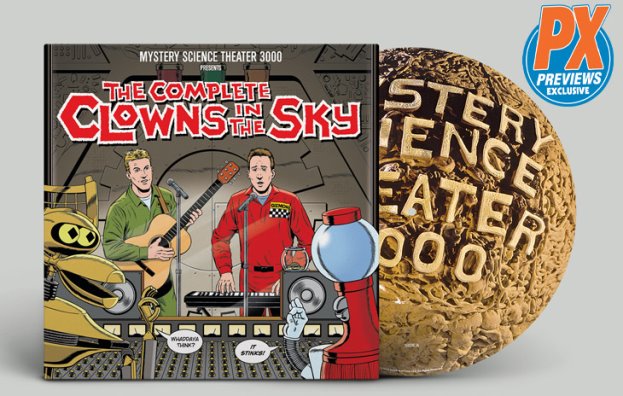