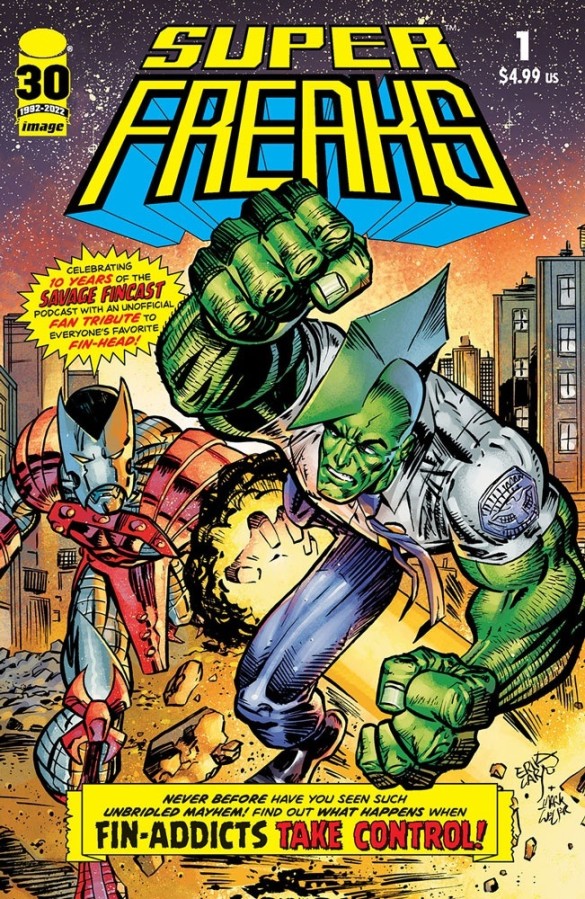 with an official fan tribute to everyone’s favorite Fin-Head in the upcoming Super Freaks. This special, off-the-wall one-shot story will hit shelves this June from Image Comics.

Savage Dragon fans unite to produce one of the wildest comics ever created! In 2021, hosts of the Savage FINcast—a podcast that celebrates Savage Dragon and the work of creator and Image Comics co-founder, Erik Larsen—began planning a way to celebrate their ten-year anniversary. After brainstorming and gauging the interests of their friends, the hosts decided to attempt a self-published Savage Dragon Fanzine featuring the talents of their fellow Savage Dragon enthusiasts. With approval from Larsen himself, the hosts began work on the fanzine with the goal of producing something that could be awarded as a prize to their podcast listeners. The project—now titled Super Freaks—brought in the talents of twenty Savage Dragon super-fans, contributing four-to-five-page stories, one-page gag strips, pinups, and more.

As the project finished up in late 2021, a digital copy of the comic was submitted to Larsen, and he was so taken by it that he insisted it be released to the world as an official publication through Image Comics.

“This was too good not to share! It’s hilarious! It’s exhilarating. It’s poignant and sexy and brutal and everything I love,” said Larsen. “It’s a ton of fun and I couldn’t let this be some limited edition book that nobody else got to see.”

Craig Olsen, Savage FINcast host and contributor/editor of Super Freaks, added: “Many of the project contributors have been collecting Savage Dragon and other Image Comics titles since the inception of the company back in 1992. To have their work printed in an Image comic—especially during the company’s 30th anniversary celebration—is really a dream come true. We are all over the moon!”

This one-shot comic is a fan love letter to 30 years of Savage Dragon and includes stories covering many characters and various eras of theSavage Dragon series. In fact, the title Super Freaks is a nod to the term established in the Savage Dragon comic for super-powered beings, many of which are showcased in the one-shots stories and pin-ups.

This 56-page extravaganza delivers action-packed superhero romps including: a multiverse of Dragons, a tie-in to the 1990s Savage Dragoncartoon, features focusing on Dragon’s son Malcolm and his wife Maxine, and stories spotlighting other fan-favorite characters.

The mix of indie creators and relative newcomers that contributed to the book are sure to create new fans of their work. Some of the more established contributors include Mark Welser (Gods of Brutality), Rich Woodall (Electric Black), Raven Perez (Ravens Dojo), Connor Tierney (Kid Eastwood), Scott James (Juiceman), and Nick Justus (Anne Bonnie).

Additionally, Super Freaks sports a dynamic brand-new cover by Erik Larsen and Mark Welser. Whether you are a long-time fan, someone who is curious about the Savage Dragon universe, or just enjoy fun comic anthologies with great art and stories—Super Freaks has something for everyone.

It’s crude! It’s rude! It’s hilarious! It’s one of the most offbeat comic books ever committed to paper!

Super Freaks will also be available for purchase across many digital platforms, including Amazon Kindle, Apple Books, and Google Play.