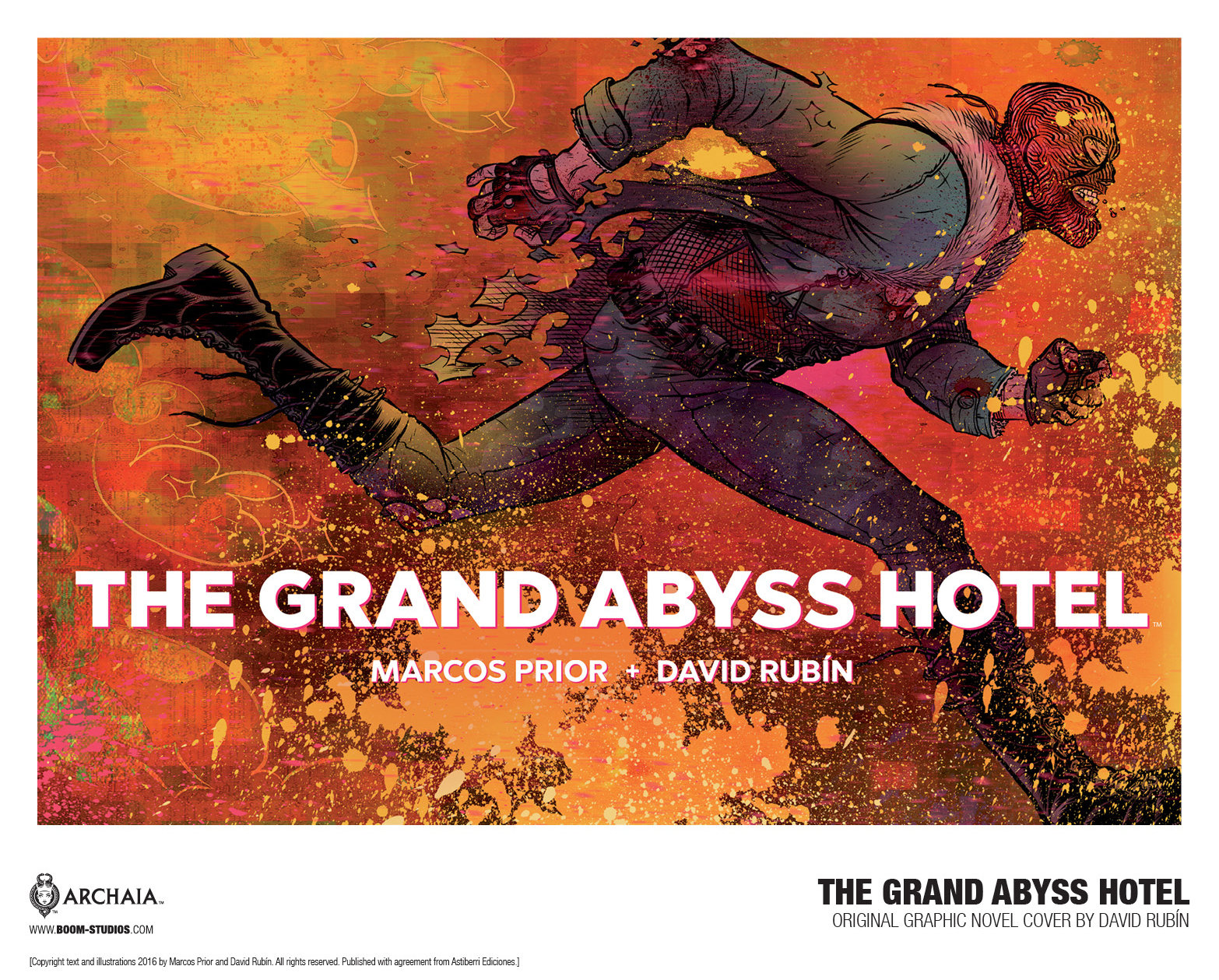 LOS ANGELES, CA (November 21, 2018) – BOOM! Studios announced THE GRAND ABYSS HOTEL, a timely original graphic novel set in a world where big business and fake news manage social order until a rebellion breaks out. Arriving in stores May 2019, writer Marcos Prior and Eisner-nominated artist David Rubín (The Hero, Rumble, Battling Boy: The Rise of Aurora West) weave a politically satirical look at democracy today through the lens of hyper-violence and explosive action.

Imagine a world overrun by big business and “fake news” via the social media machine neoliberalism has become a state religion, while the citizens quietly and then not-so-quietly rebel, giving way to violence on the streets and sowing chaos. A masked vigilante takes on the role of hero to battle politicians, the erosion of democracy, and social media. After the fires burn low and the dust settles, social order returns. Or does it?

“We created THE GRAND ABYSS HOTEL in the spirit of the greatest science fiction, acting a mirror to the world to help reveal a type of violence that, unlike purely physical, primary and spectacular violence, tends to remain hidden,” said writer Marcos Prior. “It’s the symbolic violence – both institutional and economic – that remains invisible although its effects may be more lasting and devastating than the more visible physical kind.”

“With THE GRAND ABYSS HOTEL, Marcos and I don’t want to give answers about the political and social moment that we are all living all over the World. Instead, we want to make people think about their role in the chaotic times that we live in,” said artist David Rubín. “By asking that question, we hope it helps you find your own role in the larger social and political landscape. The best weapon to fight against corrupt systems is simply an idea. Believe me, nothing is more dangerous to a bad person than asking the questions that empower the masses.”

THE GRAND ABYSS HOTEL is the latest release from BOOM! Studios’ ambitious Archaia imprint, home to graphic novels such as Mouse Guard by David Petersen; New World by David Jesus Vignolli; Bolivar by Sean Rubin; Jane by Aline Brosh McKenna and Ramón Pérez; About Betty’s Boob by Vero Cazot and Julie Rocheleau; and licensed series like Jim Henson’s The Power of the Dark Crystal and Jim Henson’s Labyrinth: Coronation.

“While Marcos and David created THE GRAND ABYSS HOTEL years ago, it feels more timely and prescient than ever when we see the rise of political extremism across the world,” said Sierra Hahn, Executive Editor, BOOM! Studios. “This is a story about the threat posed to humanity when we turn away from the toughest questions that produce the most challenging answers and the consequences of how we react to the world around us as a result of that cowardice.”

Print copies of THE GRAND ABYSS HOTEL will be available for sale on May 29th, 2019 at local comic book shops (use comicshoplocator.com to find the nearest one) and June 4th, 2019 at bookstores or at the BOOM! Studios webstore. Digital copies can be purchased from content providers, including comiXology, iBooks, Google Play, and the BOOM! Studios app.