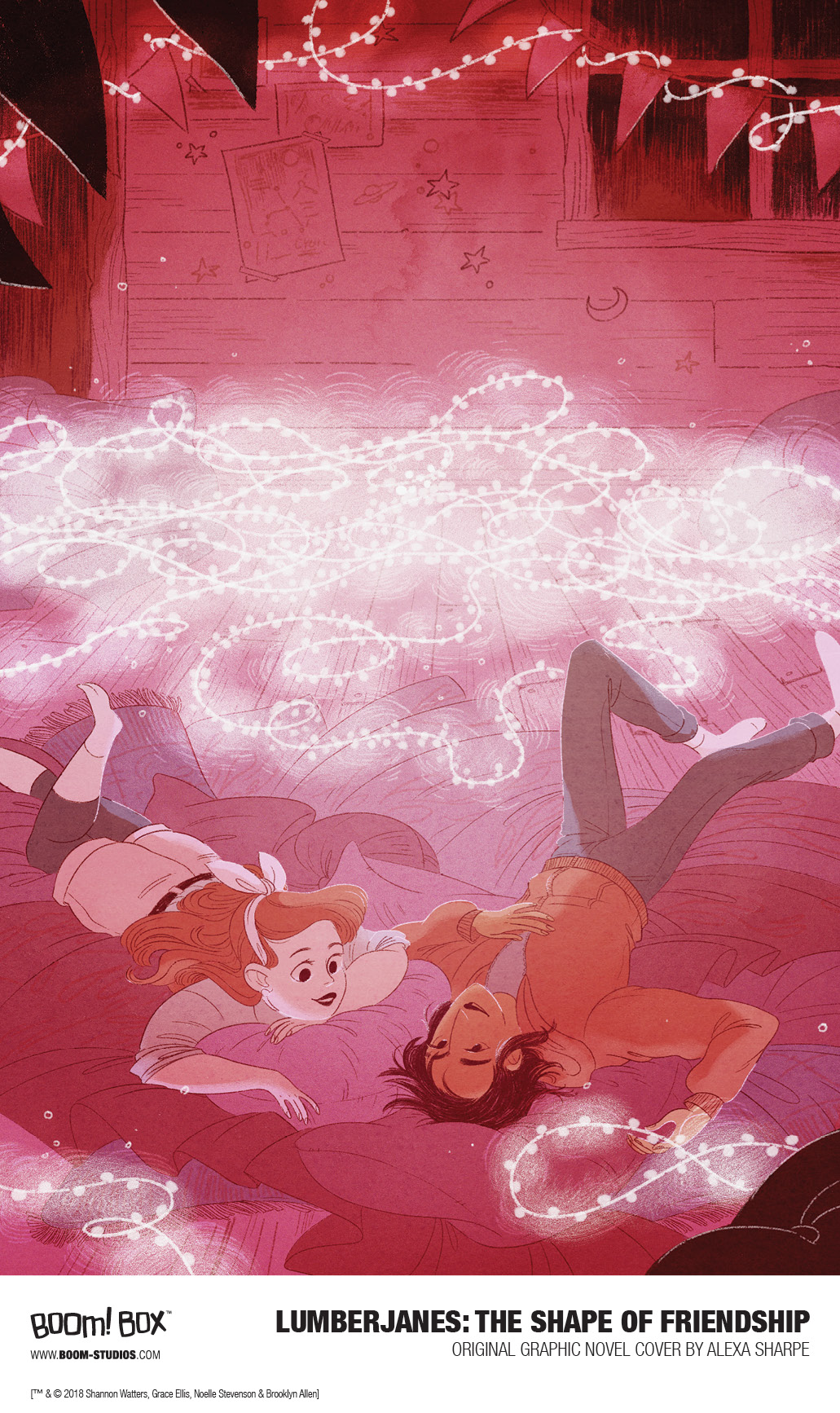 The Lumberjanes are at it again, making trouble and making friends, all at the same time. This time their adventurous rambles take them deep into the woods, to the hiding place of a group of magical creatures known as Pookas. The ‘Janes are delighted to meet these magical beings and make new friends. But what they don’t know is that these isolated magical creatures are actually master shapeshifters and just itching for the chance to see what human life is all about. Everything quickly goes awry as the Pookas decide to try life in the ‘Janes shoes and end up turning Miss Qiunzella Thiskwin Penniquiqul Thistle Crumpet’s Camp for Hardcore Lady-Types upside down. Mal, Ripley, Molly, April & Jo will have to work together, using the power of friendship, in order to reclaim their lives and teach the Pookas that sometimes your best self is your true self.

Lilah Sturges is the Eisner Award-nominated co-writer of acclaimed title Jack of Fables, as well as the writer for well-known series such as House of Mystery, Fables: The Wolf Among Us, Doctor Who, Thor, and Justice Society of America, and the upcoming The Magicians: Alice’s Story original graphic novel set in the universe of Lev Grossman’s best-selling trilogy. This will be her second original graphic novel for the beloved Lumberjanes franchise, including Lumberjanes: The Infernal Compass.

“Writing the Lumberjanes has been the most fun I’ve ever had writing comics, and I’m really excited for The Shape of Friendship! It’s such a fun, sweet story with lots of action and laughs, but also lots of feelings, too.” said writer, Lilah Sturges. “In this book, we get to focus on April and Jo’s friendship, and I’m especially excited to write about those two; Jo is such an important character to me and I really want to do her justice!”

Claudia Rinofner, known as polterink, is an exciting new artist and illustrator from Austria and the artist of the first Lumberjanes original graphic novel, Lumberjanes: The Infernal Compass, with writer Lilah Sturges, released in October 2018. She is also the innovative creator of the online comic series, Crysalis.

“I’m super excited to return to the Lumberjanes universe with this great story! It’s got more friendship, more shenanigans and more magical creatures, pretty much everything awesome you’ve come to expect from the series!” said artist, polterink.

LUMBERJANES: THE SHAPE OF FRIENDSHIP is the latest release from BOOM! Studios’ award-winning BOOM! Box imprint, home to groundbreaking original series such as Giant Days by John Allison, Lissa Treiman, and Max Sarin; Smooth Criminals by Kirsten ‘Kiwi’ Smith, Kurt Lustgarten, and Leisha Riddell; Fence by C.S. Pacat and Johanna The Mad; and The Avant-Guards by Carly Usdin and Noah Hayes.

“Friendship has always been the most important element of the Lumberjanes’ stories. No matter what kind of magical, supernatural, or spooky situation they get themselves into, their enduring and heartwarming relationships are what save the day.” said Jeanine Schaefer, Executive Editor, BOOM! Studios. “Lilah and polterink do an incredible job of showing fans, young and old, that a hardcore lady-type friendship is all about finding the people with whom you can be your truest self.”

Eisner Award-nominated writer Lilah Sturges will be in attendance as a guest of BOOM! Studios at ALA Midwinter 2019 in Seattle, Washington. She will be available for signings both Saturday and Sunday, 1/26-1/28, as well as a guest on the BOOM! Studios: Discover Yours panel on Monday, 1/28, where she will join some of the most acclaimed voices in graphic fiction today for a discussion on the diverse, award-winning imprints of BOOM! Studios, Archaia, BOOM! Box and KaBOOM!.

Print copies of LUMBERJANES: THE SHAPE OF FRIENDSHIP will be available in November 2019 at local comic book shops (use comicshoplocator.com to find the nearest one), bookstores or at the BOOM! Studios webstore. Digital copies can be purchased from content providers, including comiXology, iBooks, Google Play, and the BOOM! Studios app.