I only met Bob Fujitani once, but that one meeting was enough to create a relationship that spanned 15 years. I was fortunate enough to attend San Diego’s Comic-Con for my birthday back in 2005. Among the guests, there was Bob Fujitani, as a collector of original art and a fan of the MLJ characters I thought it might be nice to get a Hangman sketch from Bob. I was aware he had worked for Gold Key Comics for a number of years doing Doctor Solar and a number of other books and also worked on the Flash Gordon newspaper strip which I used to read as a teenager on my way to work after school, but I wanted a Hangman.

Well on my one day there I approached his table and asked if he would be willing to do a head sketch for me. Bob’s reluctant response was that he had not drawn the character in years, my rapid response was “I’ve got reference,” so Bob did a bang-up sketch of the Hangman for me. I thanked him and we exchanged contact information for a possible commission sometime in the future and parted ways. Later in the day, I had a distinct feeling of satisfaction as I walked past his booth and saw a long line of folks waiting to get an autograph or a sketch.

The commission never happened, but one day out of the blue a box arrived from Bob. I opened it up and there was a lovely painting of a Hangman cover Bob had done in the Golden Age for MLJ. As a thank you, I sent him some homemade brownies and a tradition began.

Every Christmas I would make brownies and send them to Bob along with our annual superhero-themed Christmas Card. One night unexpectedly he called to thank me for the brownies and we had a great conversation where I learned a lot more about his career. The annual tradition continued along with a few phone calls and about three years ago I got another call from Bob thanking me for the Christmas card and brownies. Then the heartbreaking statement came from Bob, “It is the only Christmas Card I got this year.”

Bob had recently lost his wife Ruth sold his longtime home and moved to a new apartment which ironically faces the schoolyard of the elementary school where he once went to school. Bob told me that he liked to sit outside on his porch and watch the children play. I asked Bob if he ever went to the school to talk to the children about his years in comics or perhaps to do a sketch class for them, after all, he is the man who drew Flash Gordon. But Bob maintained that he couldn’t draw on the level that he felt he should, I resolved to do something about this, and perhaps you helped.

I sent out an appeal on Facebook, to all my personal friends and to a local school that I have interacted with and asked could they please take a moment to add one more name to their Christmas lists. Many of you did, Bob called a few days before Christmas and said he was flooded with Christmas cards. He was so appreciative, especially for the schools that were kind enough to have their students create cards for him. Not only did Middle Valley Elementary students cowboy up, but the daughter of an old girlfriend also got her students to send Bob Cards.

For the last few years, this new tradition has continued(along with brownies) and schools have sent Bob cards, the Middle Valley Elementary Marvels have even sent cards on his birthday. Bob was so appreciative of the cards he received from strangers.

I take great comfort in knowing that in his final years, Bob’s special days were highlighted by the generosity of others and that you all gave him some of the joy that he gave to thousands of readers throughout the decades, whether it be through a caped and cowled crusader called the Hangman, an atomic hero of the Silver Age, Dr. Solar or in the Bronze Age when he drew the galactic adventures of one of the earliest space-faring heroes, Flash Gordon.

Ninety-eight years is a life well lived and Bob Fujitani brought joy to a lot of people in those years. While Bob’s adventure in life has now ended, Bob’s illustrated adventures will continue to live on in print for new generations to enjoy, may he rest in peace. 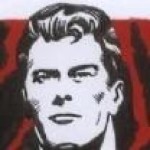 Michael Dunne has loved comics since he can remember, he gave them up for a while to pursue real life priorities, then original art and his love for the JSA brought him back. In his professional life, Michael is an award-winning writer and has a very tolerant wife.