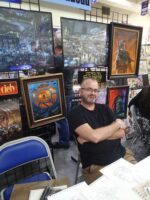 Here’s a shout out to John Nadeau who started his art career at AC Comics decades ago drawing FEMFORCE and such diverse features as THE DURANGO KID and ROY ROGERS. John is a good friend and a great talent. He also supplied superb covers for FEMFORCE, CRYPT OF HORROR, STORMY TEMPEST, and NIGHTVEIL in recent years. Now he has produced an extraordinary series entitled VECTOR.

When I flipped thru the new sci-fi comic VECTOR numbers one and two yesterday I was immediately struck by the visual complexity of the art… the architecture, the depth, free-hand line work, and the hundreds and hundreds of little people delineated therein. I realized that absorbing all this would require a concentrated effort on my part.

After all, if John Nadeau, creator, writer, artist, colorist, had put this much into VECTOR, reading it, drinking it all in, should have my undivided attention. So I decided to wake up early this morning and dive into VECTOR when I would not be disturbed by the everyday obligatory interruptions of my life.

As I said the fact that the detailed line work has executed with freehand lines set this apart from anything I had ever viewed before. Sure, the great 1950’s artist, Joe Maneely, worked similarly but most of what I experienced as a kid was his Westerns where the freehand approach was just right for frontier trappings. But what John accomplishes here goes way beyond anything I have seen from Maneely, and that’s saying something. 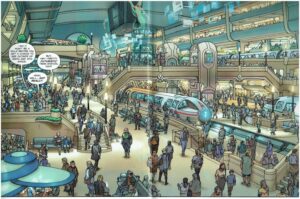 It’s hard to describe with words but I’ll try. Imagine turning the cluttered, futuristic city from the film BLADE RUNNER into line art and then multiplying that a thousandfold, you may get close to what Nadeau has done here. In creating the “Floating World” of Vesta, John first has constructed the architecture of an entire city, conceptualizing sidewalks, storefronts, eateries, transport systems, advertising displays, and the like… and then extending them on multiple levels three kilometers deep. 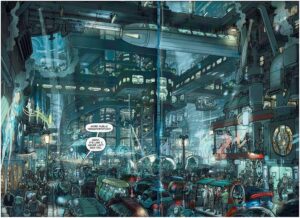 And only after he has devised all that does John place into this world, the central characters of his story. They are there, walking among hundreds of other people, each of which is fully realized in terms of wardrobe, physical characteristics, and convincing posture. 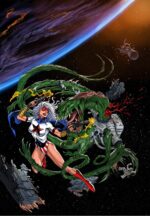 The story is constructed by switching back and forth between settings and people who seem at first to have no connection with each other. There are no captions in Nadeau’s script to help the reader along. Normally I do not like that practice but with patience, we see that all elements of the unfolding plot fall neatly into place making for a cleverly assembled storyline. The writing is concise and intelligent. The dialog fits the characters, is never redundant, and moves the story forward. Read each balloon carefully as off-camera actions are revealed in their contents. The characters develop subtly as the plot progresses which is as it should be. 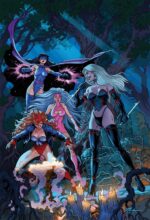 The plot? Let’s say that the story involves collecting valuable objects and the extreme lengths to which collectors go to obtain things that are precious to them. Think of THE MALTESE FALCON and again multiply that a thousandfold. That should appeal to readers who are undoubtedly collectors themselves. 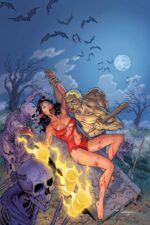 I keep making movie references in this review. Well, it’s all here, laid out to an art director’s perfection. All it needs is for some studio to snatch it up and transform it into a cinematic masterpiece. John Nadeau did it all by himself save for the lettering. John, of course, is a master illustrator. Seeing his other work quite literally takes your breath away. Examining the minutia to detail in VECTOR causes one’s jaw to drop. It is obvious that John has installed a good portion of himself in this excellent work.

I’ve known John since he was in high school and he had exceptional talent back then. Over the ensuing decades, this talent has blossomed into something quite extraordinary.

Understandably VECTOR No. 3 will be some while coming… at least a year, admittedly. Worth the wait? Hell yes! John Nadeau prepared the first two issues for sale at this year’s Orlando MEGACON.

Unfortunately, comic conventions have been canceled around the world. The first issue is available for order (digital or hard copy) on IndyPlanet. Readers with intelligence and an appreciation for outstanding art and story should seek it out. It is, to be sure, a collector’s item. 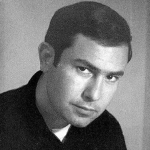