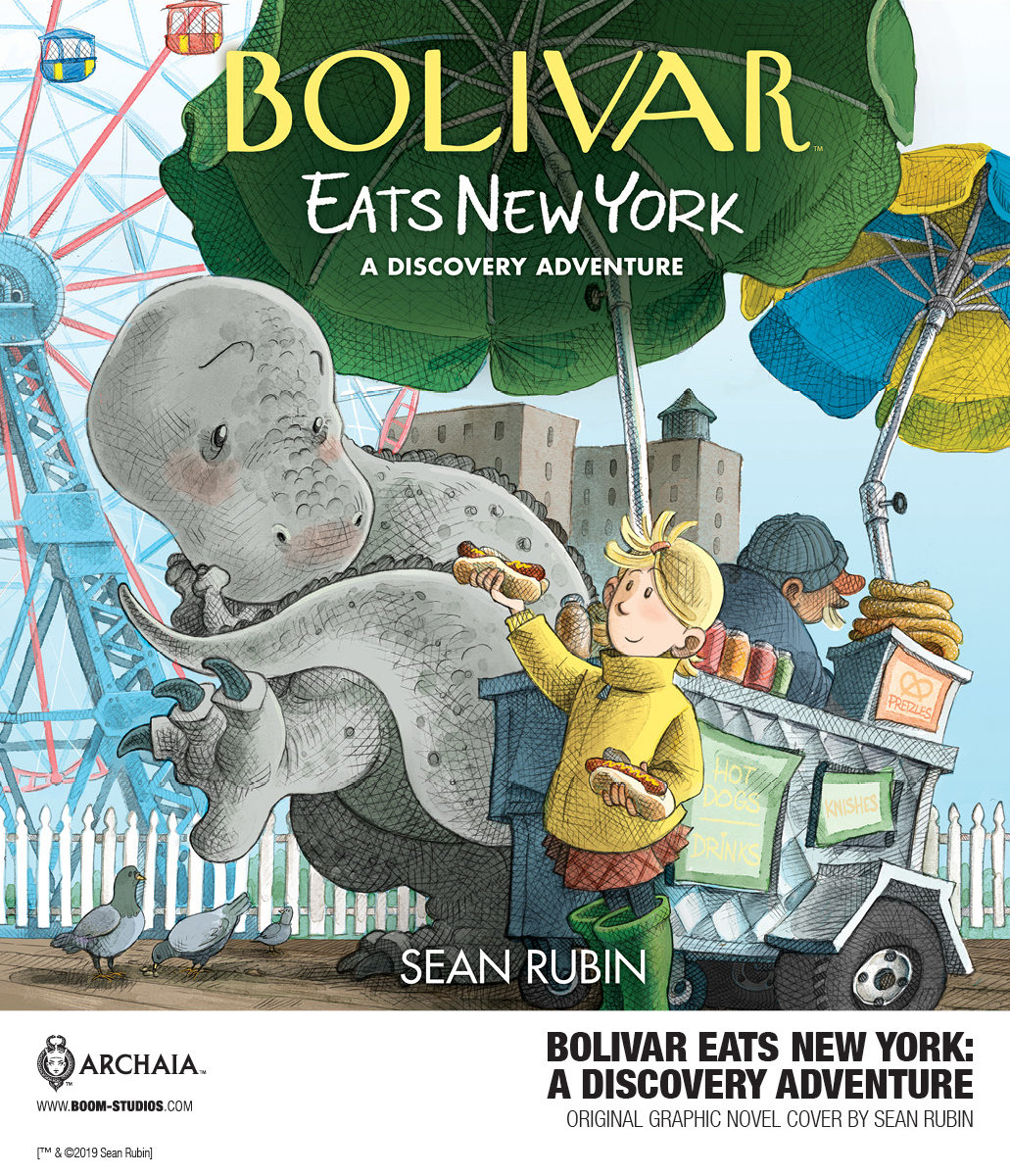 Debuting in 2017, Bolivar introduced readers to a dinosaur that lives in New York City—and his young neighbor Sybil who tries to tell everyone about him. The original graphic novel earned universal acclaim, including a prestigious selection as one of NPR’s “Best Books of 2017”, being named one of 2017 New York Public Library Best Books For Reading And Sharing, earning a 2017 Junior Library Guild Selection and earning a place as a 2018 Excellence In Graphic Literature Finalist: Best Children’s Books. Bolivar continued to impress audiences in 2018, earning nominations for 2018 Eisner Comics Industry Award for Best Kids’ Book (Ages 9-12) and 2018 Ringo Award for Best Kids Comic or Graphic Novel, while Rubin himself was named a finalist for the 2018 Russ Manning Most Promising Newcomer Award. The original graphic novel also earned starred reviews in top publications such as Publishers Weekly, Booklist and School Library Journal.

In BOLIVAR EATS NEW YORK: A DISCOVERY ADVENTURE™, Sybil learns that Bolivar only likes corned beef sandwiches, so she informs him that he’s been missing out on one of the great attributes of New York City and its rich communities–delicacies from around the world! Knishes! Falafel! Dim Sum! And it wouldn’t be a story in the Big Apple without pizza! Explore the five boroughs: Brooklyn, Queens, Bronx, Staten Island, and Manhattan in this lushly illustrated Discovery Adventure™ where kids and parents alike search for their favorite foods, and find other sites unique to one of the greatest cities in the world!

Sean Rubin is a native of Brooklyn, New York and graduated from Princeton University, later making his graphic novel debut in 2017 with Bolivar. He’s also an illustrator for the New York Times Bestselling Redwall series and of the upcoming Astronaut Who Painted the Moon (Scholastic, 2019) and Capital Magic (Holiday House, 2020).

“I was delighted when BOOM! Studios suggested creating a discovery adventure around Bolivar and New York City, especially because this would give me an opportunity to revisit some of my favorite places to eat in all five boroughs,” said Rubin. “I’ve even had multiple offers to help with the research!”

“Audiences of all ages embraced the hijinks of young Sybil and her prehistoric friend Bolivar as they maneuvered through the streets of Manhattan. But we knew they’re journey was just beginning. . .” said Sierra Hahn, Executive Editor, BOOM! Studios. “BOLIVAR EATS NEW YORK: A DISCOVERY ADVENTURE™ is a love letter to everything that makes New York such an unforgettable city—the mix of people, cultures and, of course, the incredible food!”

Print copies of BOLIVAR EATS NEW YORK: A DISCOVERY ADVENTURE™ will be available for sale in November 2019 at local comic book shops (use comicshoplocator.com to find the nearest one), bookstores or at the BOOM! Studios webstore. Digital copies can be purchased from content providers, including comiXology, iBooks, Google Play, and the BOOM! Studios app.

For continuing news on BOLIVAR EATS NEW YORK: A DISCOVERY ADVENTURE™ and more previews from BOOM! Studios, stay tuned to www.boom-studios.com and follow @boomstudios on Twitter. 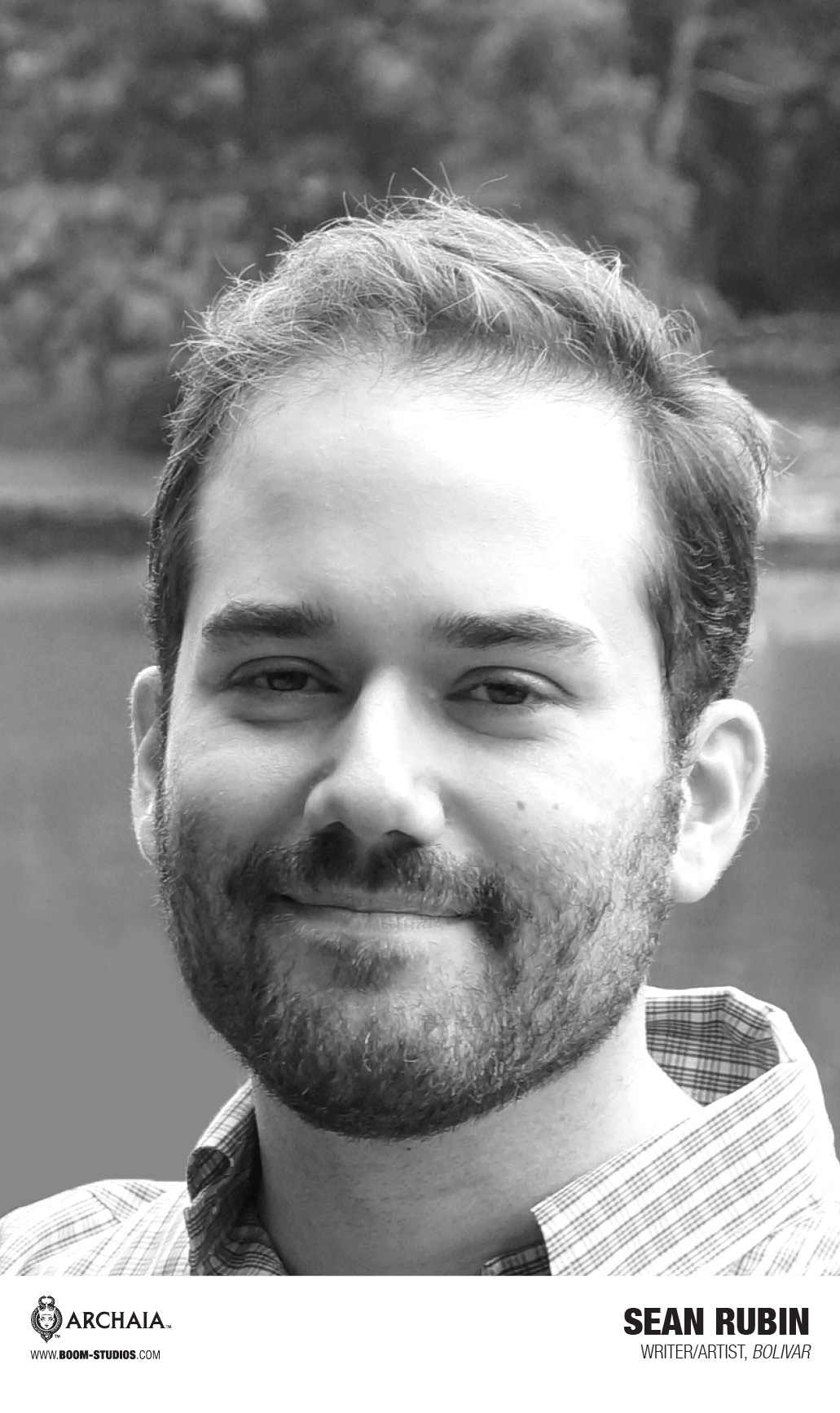