Brace yourselves, Earthlets everywhere – The Galaxy’s Greatest: 2000 AD at 45, the star-studded online convention celebrating four and a half decades of the groundbreaking British comic, is this weekend! 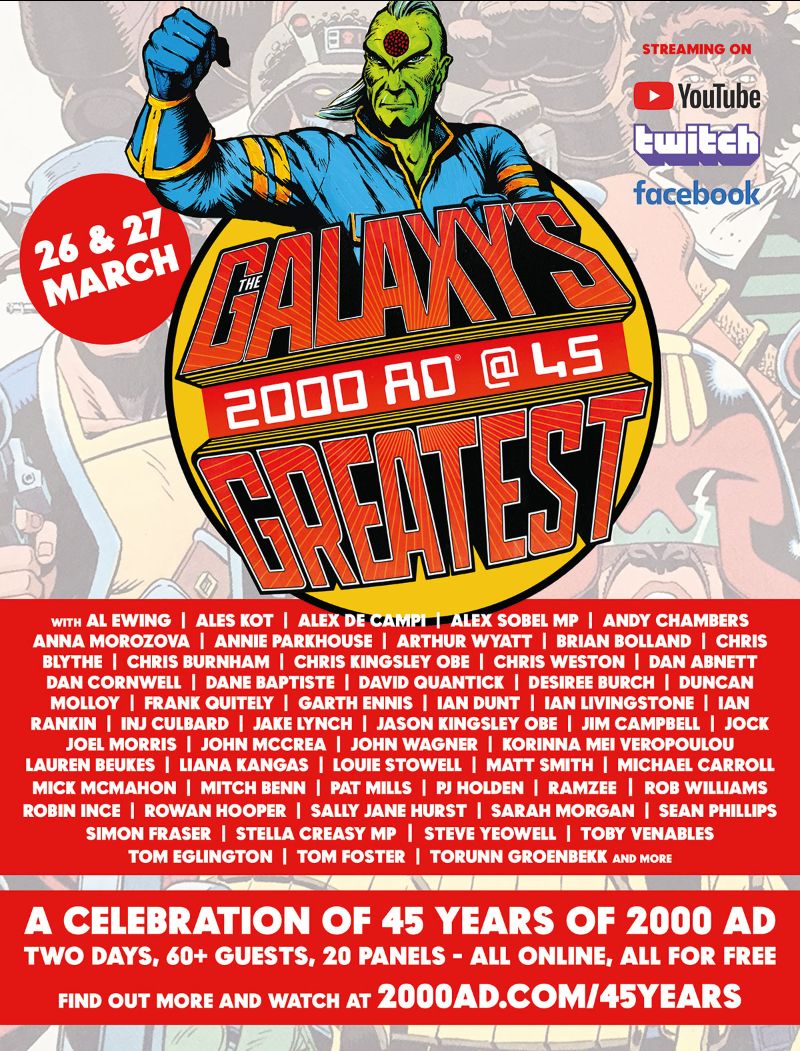 The two-day show will stream online and for free on 26 and 27 March on 2000AD.com/45years, as well as 2000 AD’s Facebook and YouTube, and Rebellion’s dedicated Twitch stream.

Featuring more than sixty guests on twenty panels, The Galaxy’s Greatest features celebrities and creators discussing the impact of 2000 AD on them, on comics, and on wider culture over almost half a century.

Guests from the world of entertainment include award-winning comedians Robin Ince (The Infinite Monkey Cage), Desiree Burch (Taskmaster, Unfuckable), Dane Baptiste (Mock the Week, 8 Out of 10 Cats Does Countdown) and Mitch Benn (The Now Show), bestselling authors Ian Rankin OBE (Rebus), Lauren Beukes (The Shining Girls), and Louie Stowell (Loki: A Bad God’s Guide to Being Good), writer and broadcaster David Quantick (The Day Today), MPs Stella Creasy and Alex Sobel, and political commentator Ian Dunt (i newspaper, How To Be A Liberal) with more to be announced!

The next 45 years of 2000 AD will also be discussed with owners and publishers Chris Kingsley OBE and Jason Kingsley OBE, and current editor Matt Smith – now the longest serving editor in 2000 AD history.

The Galaxy’s Greatest promises to be an unmissable experience befitting such a milestone for Britain’s most groundbreaking comic!