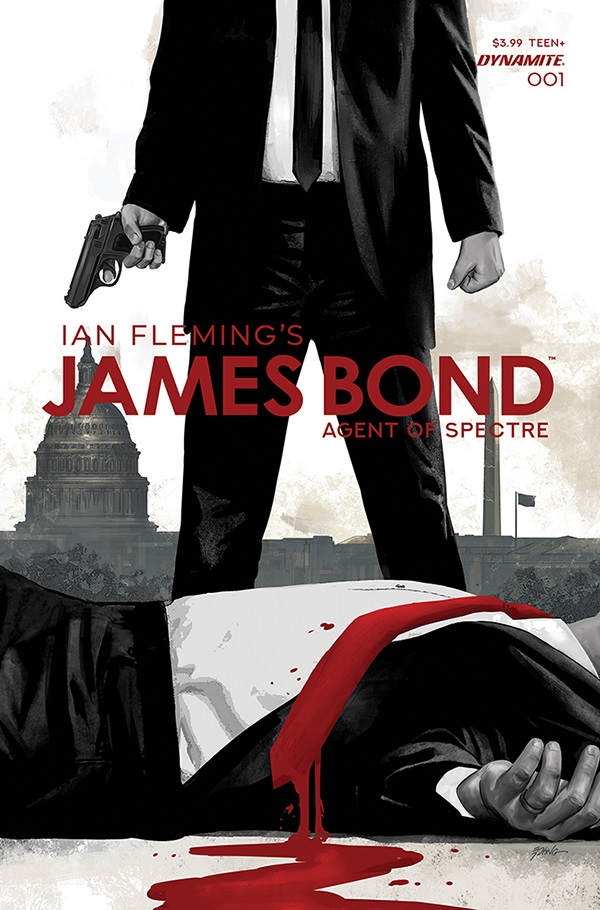 There’s a civil war brewing within the iconic nefarious organization of SPECTRE. A power-hungry rookie American member has her crosshairs aimed at the one and only Number 1. Ernst Stavro Blofeld turns to his last chance and requests assistance from his eternal nemesis, as he and Bond come face to face for the first time in Dynamite’s comic books. With an objective that amounts to pulling apart SPECTRE in the process, and the life of ally Felix Leiter on the line, everyone’s favorite spy is caught within the web.
Writer Christos Gage (Spider-Geddon, Superior Spider-Man) enlists for his first mission with Her Majesty’s Secret Service. Some fans may not know that the acclaimed comics scribe is also a prolific television screenwriter, with credits on Daredevil, Hawaii Five-O, and even the award-winning Spider-Man video game on Playstation. He brings that same multi-discipline cinematic flair to a character known across media.

“I’ve been lucky enough to work on many iconic characters in my career, but this is my first time writing Bond, and I’m having a blast,” said Christos Gage. “Throwing him into a web of intrigue with his archenemy Blofeld as an untrustworthy ally is thrilling enough, but to have the amazing Luca Casalanguida as my artistic collaborator, not to mention covers by legends Steve Epting and Sean Phillips, is an embarrassment of riches. They give me a license to kill…creatively…and I plan to use it!”

Gage is joined by fan-favorite 007 artist Luca Casalanguida, returning from Hammerhead, Kill Chain, The Body, and other works like Lost Soldiers. The talented squad is rounded out with colorist Heather Moore.

Last but certainly not least is the duo of spectacular cover artists. Steve Epting’s espionage-inspired work on the Eisner Award-winning Captain America and Velvet make him the perfect match for the perfected prototype of the genre. His stylistic and slick covers will be evocative of the classic book covers, posters, and title sequences of the storied franchise. While Sean Phillips is a master of grounded stories of crime and gun-toting antiheroes, with a handful of Eisners under his belt too.

This latest case is full of action and intrigue, as Bond’s travels take him from the United States capital, to Blofeld’s ancestral estate in Greece, and of course the British headquarters of MI6. Beloved characters M and Moneypenny will appear, as well as some trademark gadgets, such as a CornerShot gun.

Gage, Casalanguida, and company are hueing to a more novel-accurate portrayal of Blofeld that even many Bond fans may not be as familiar with. Just as conniving as ever, the original Blofeld is a massive man and a true equal to Bond, both physically and mentally. With the two entangled in an uneasy alliance for now, the series could go anywhere as the two must eventually come to blows when all the bodies are down. And in the end, is this a dark path that Bond can even return from?

JAMES BOND: AGENT OF SPECTRE #1 is solicited in Diamond Comic Distributors’ January 2021 Previews catalog, the premier source of merchandise for the comic book specialty market, and slated for release in March 2021. Comic book fans are encouraged to preorder copies of the issue with their local comic book retailers. It will also be available for individual customer purchase through digital platforms courtesy of Comixology, Kindle, iBooks, Google Play, Dynamite Digital, ComicsPlus, and more!

THE AVENGERS BRACE THEMSELVES FOR WORLD WAR SHE-HULK!