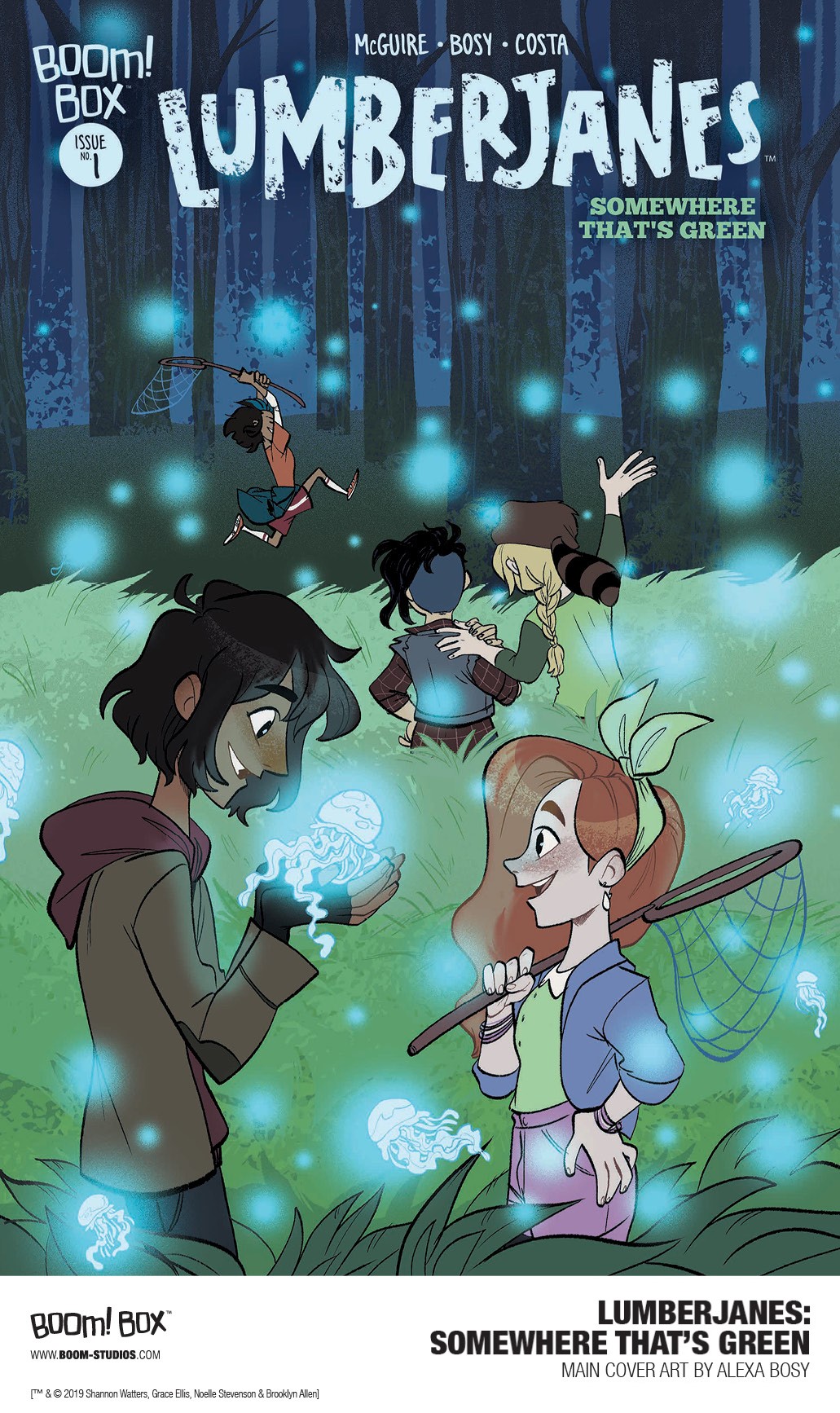 It’s a rainy day at Miss Qiunzella Thiskwin Penniquiqul Thistle Crumpet’s Camp for Hardcore Lady-Types, and cabin fever has Ripley literally climbing the walls… and ceiling.. and Jo, while April is hard at work earning indoor badges and the rest of the ‘Janes try to fight the rainy day blues. Everyone’s ready to call it a day when they hear something outside and set out into the storm on an epic quest to reunite what look like lost kittens with their mother, and instead stumble upon a mysterious and fiercely guarded secret garden in the middle of the forest. Discover a new corner of the Lumberjanes universe you’ve never seen before, a green haven full of magical and wondrous plants that would be the perfect  place for the Lumberjanes to earn their Cryptobotany badges…but only if the creatures they find there will let them leave.

In Mariana Costas’ short story, the Yetis are back! Only this time, they need help from Jo and the rest of the Lumberjanes when a storm knocks out the power to their treehouse and plunges the entire Camp into darkness. It’ll take brains, guts, and the power of teamwork to fix this problem, but the Lumberjanes have yet to meet a challenge they can’t handle when they work together.

Launched in 2014 under BOOM! Studios’ YA-focused BOOM! Box imprint by series co-creators Shannon Watters, Grace Ellis, Brooklyn Allen, and Noelle Stevenson, Lumberjanes was originally solicited as a limited series, but the overwhelming response from fans transformed it into an ongoing series that has become a New York Times best-seller, earned numerous nominations for prestigious awards including the GLAAD Media Award and the Eisner Award (which it has won twice), and has even crossed over with heroes from the DC Comics Universe (in Lumberjanes/Gotham Academy). The Lumberjanes have expanded to middle-grade novels at Abrams Books, a diverse array of merchandise from pins to patches, and a feature film in development at 20th Century Fox.

“The Lumberjanes are on a mission to reunite several lost and mysteriously verdant kittens with their mother somewhere in the vast, unknown reaches of the forest, without getting lost in the green forever.” said Jeanine Schaefer, Executive Editor, BOOM! Studios. “The ‘Janes have gotten into quite a few scrapes before and encountered a lot of supernatural creatures and magical beings, but each time they’ve managed to find surprisingly creative ways of resolving their problems using patience, kindness, understanding, and the power of friendship. All of those qualities will come in very handy when exploring SOMEWHERE THAT’S GREEN in this issue!”

Print copies of LUMBERJANES: SOMEWHERE THAT’S GREEN #1 will be available May 29, 2019 at local comic book shops (use comicshoplocator.com to find the nearest one) or at the BOOM! Studios webstore. Digital copies can be purchased from content providers, including comiXology, iBooks, Google Play, and the BOOM! Studios app.

For continuing news on LUMBERJANES: SOMEWHERE THAT’S GREEN #1 and more from BOOM! Studios, stay tuned to www.boom-studios.com and follow @boomstudios on Twitter. 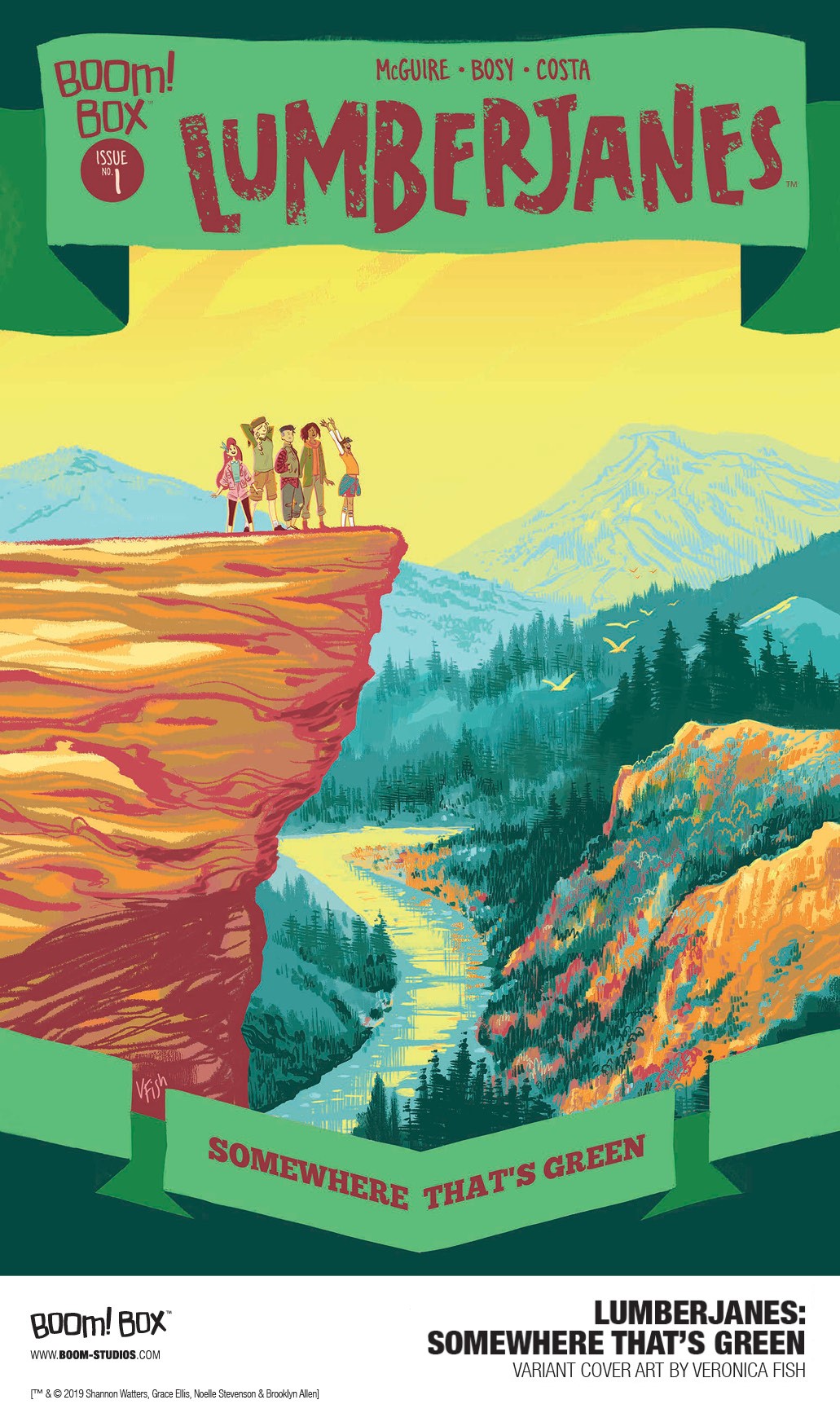 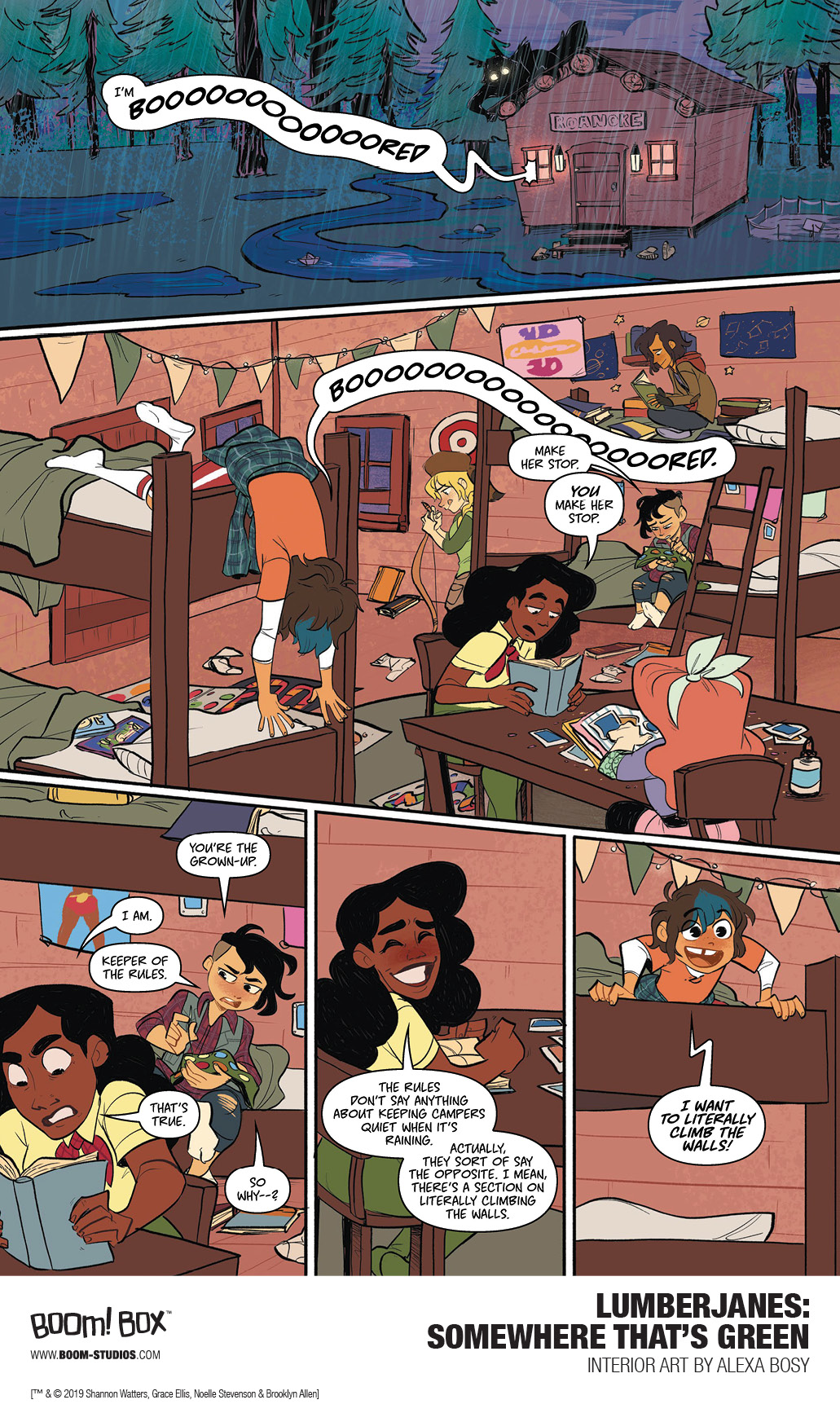 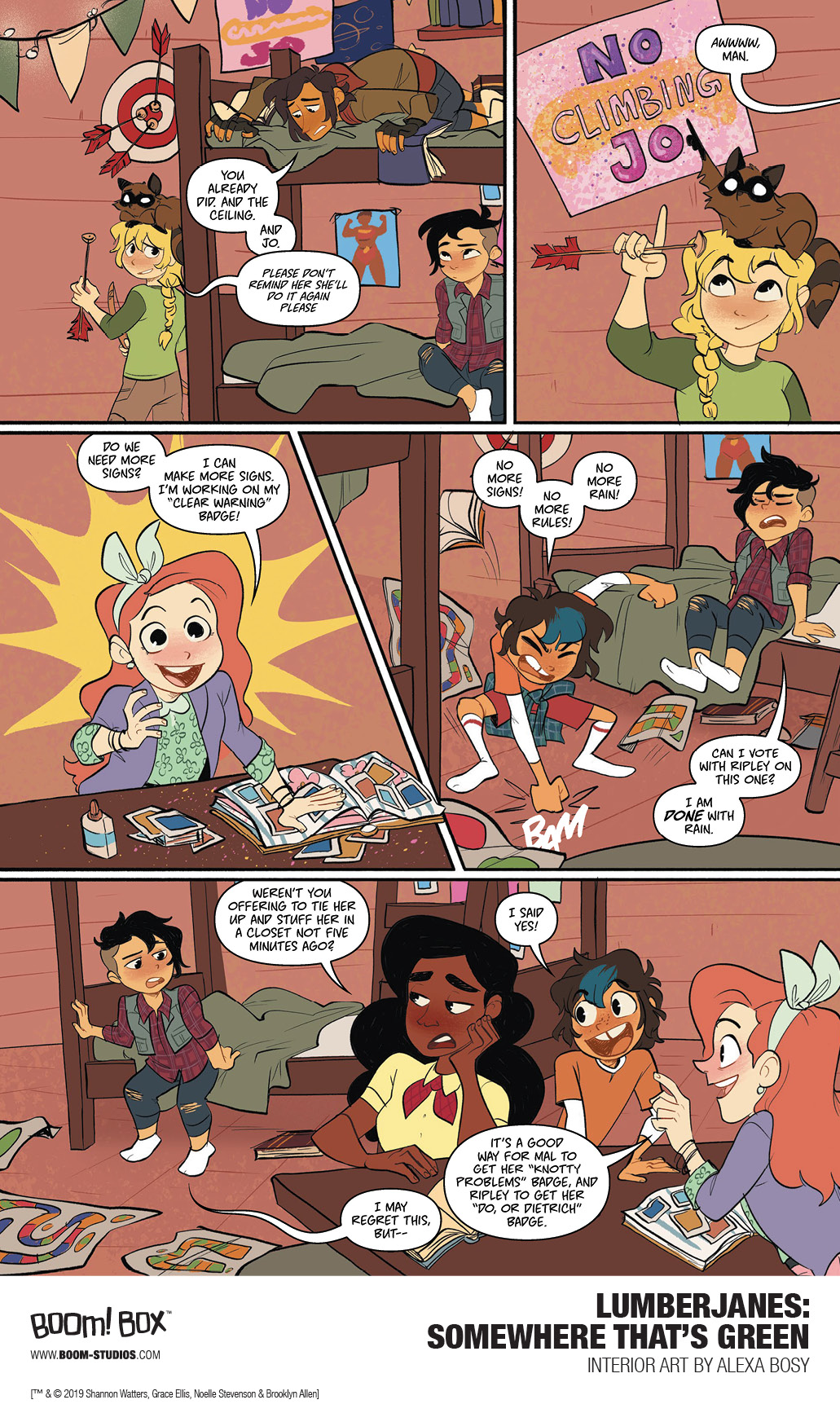 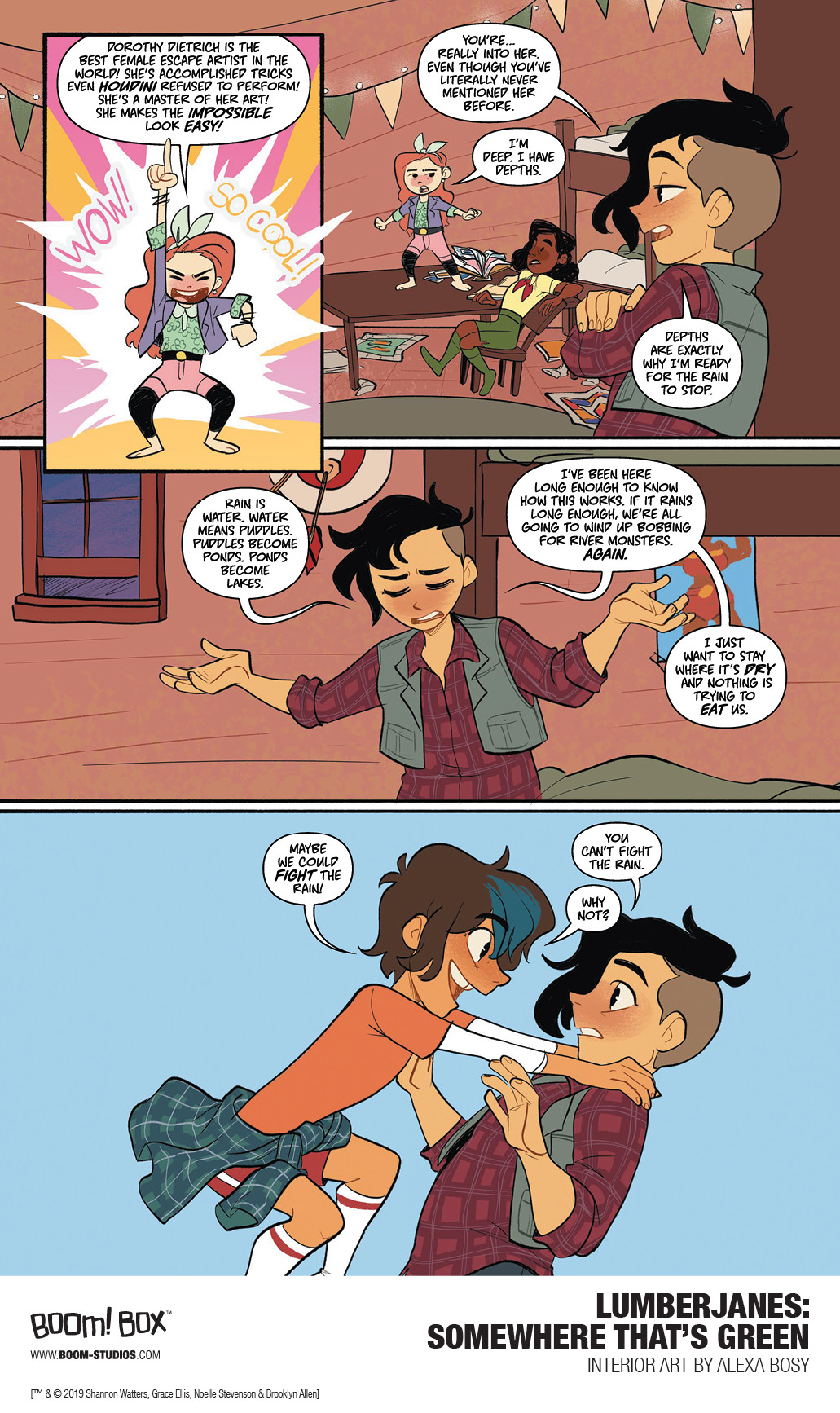 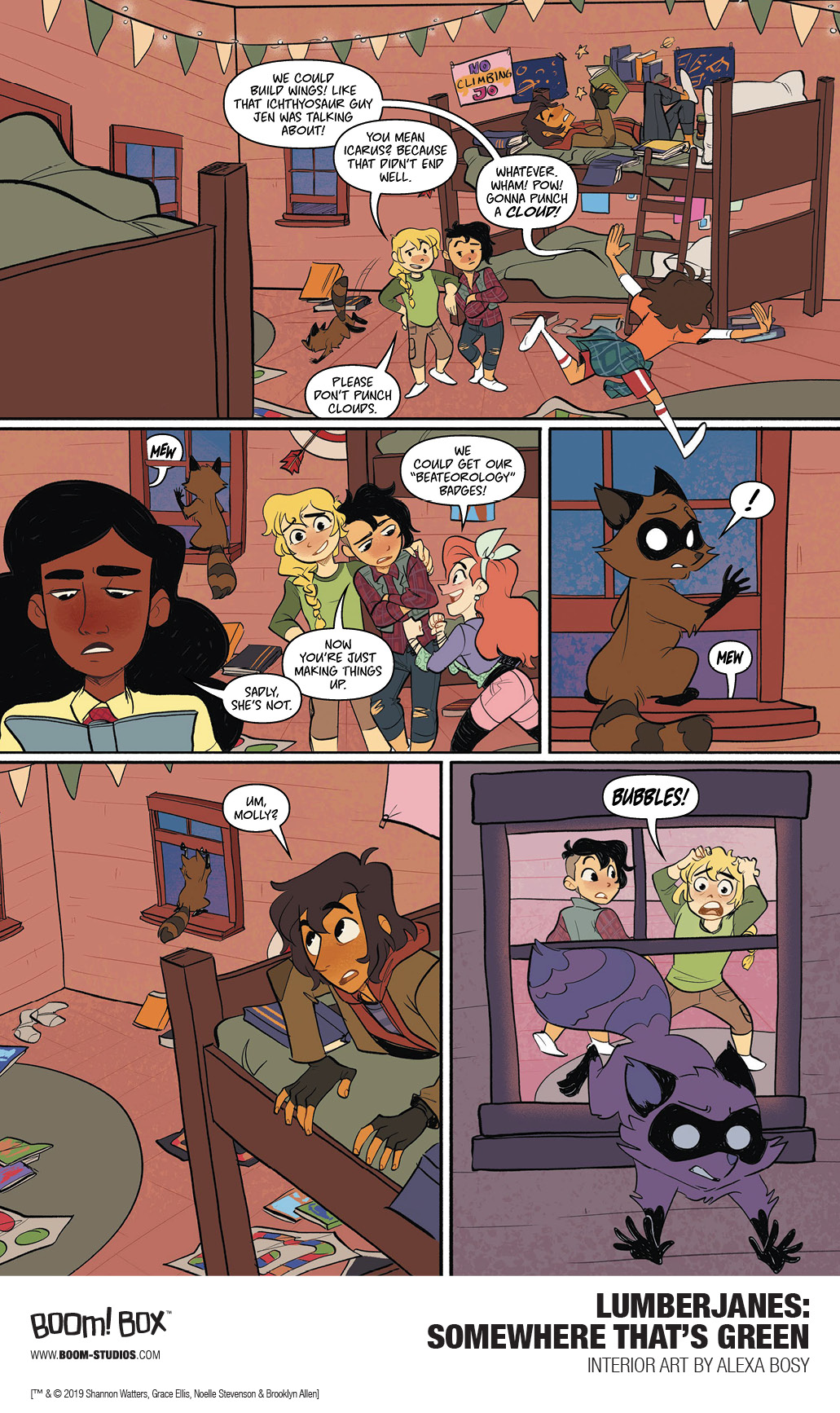 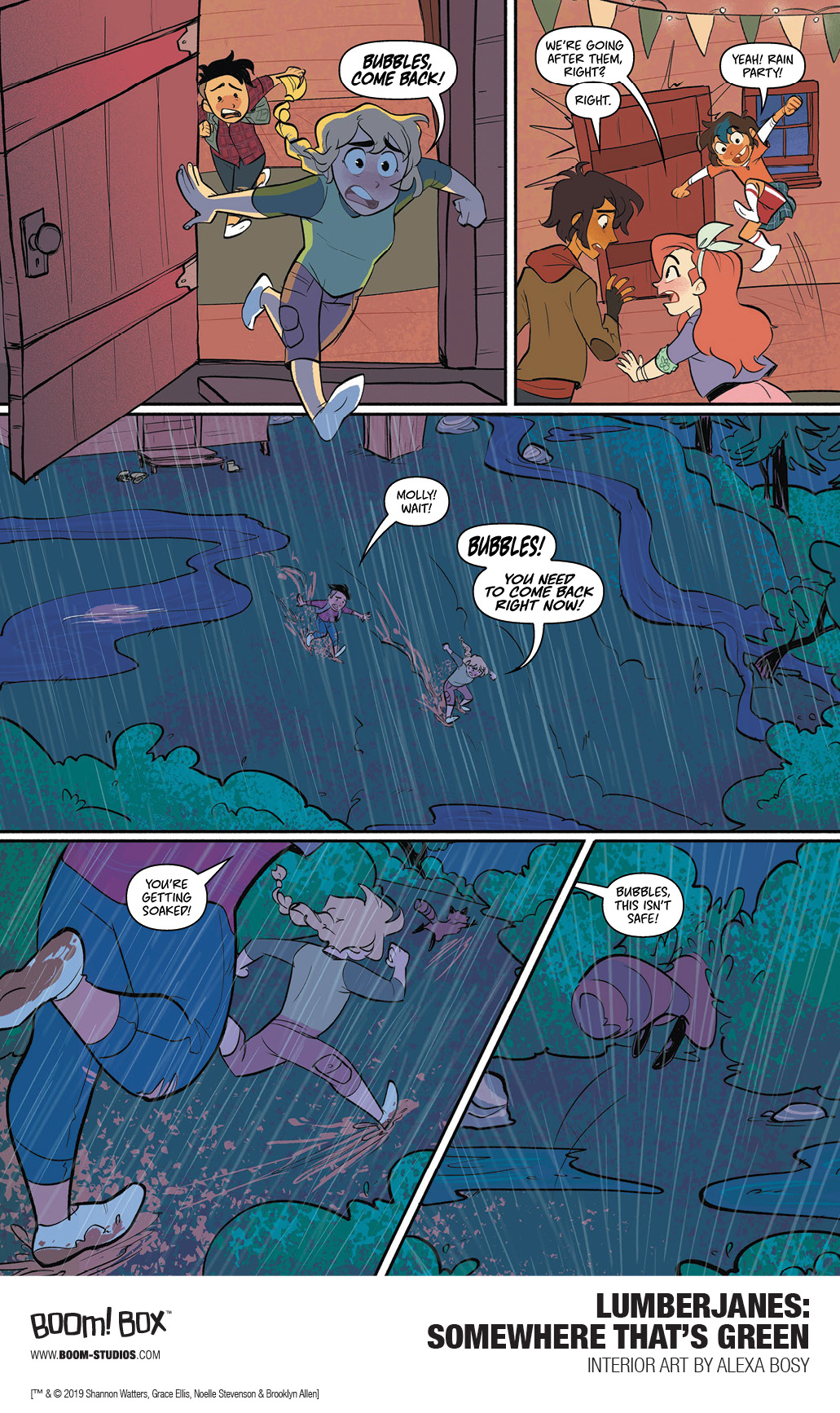