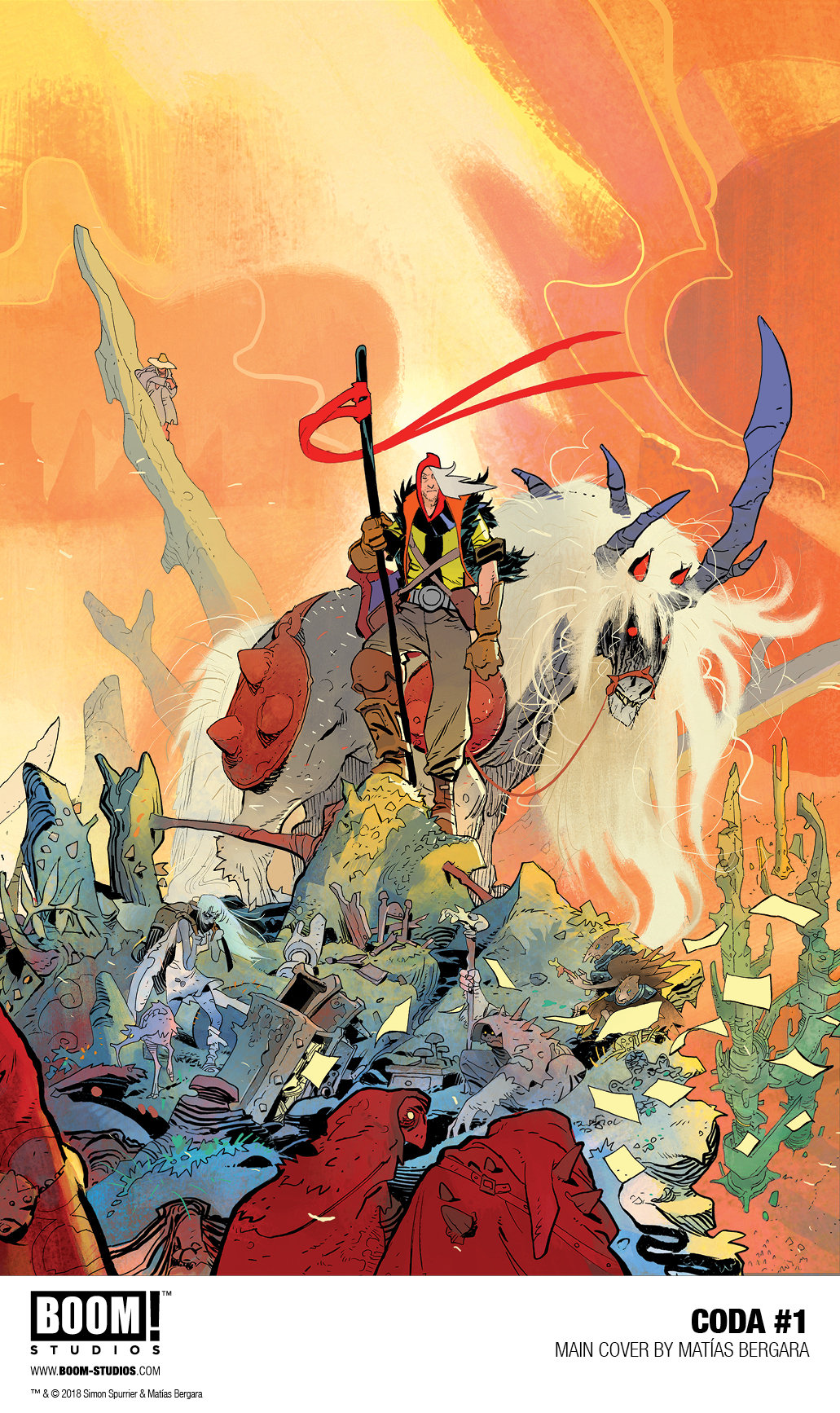 LOS ANGELES, CA (April 5, 2018) – BOOM! Studios is proud to  unveil your first look at CODA, a new twelve-issue series from Eisner-nominated writer Simon Spurrier (Sandman, The Spire) and Matías Bergara (Cannibal, Supergirl). In the aftermath of an apocalypse which wiped out nearly all magic from a once-wondrous fantasy world, an antisocial former bard named Hum seeks a way to save the soul of his wife with nothing but a foul-tempered mutant unicorn and his wits to protect him…but is unwillingly drawn into a brutal power struggle which will decide forever who rules the weird wasteland.

“This is Si Spurrier unleashed, creating a truly unique and exciting new world in CODA that’s equal parts Mad Max and High Fantasy,” said Eric Harburn, Editor, BOOM! Studios. “Teamed with Matías Bergara, who’s delivering career-defining work, these two are making sure every chapter of this twelve-issue series is a broken fantasy epic unlike anything you’ve experienced in comics or anywhere else.”

CODA #1 will be an oversized debut issue, with 40 pages of story content and additional backmatter at the same $3.99 price point as each issue of this twelve-issue series. This first issue also features a stunning wraparound main cover by Matías Bergara, along with two variants by superstars Jae Lee & June Chung (Batman/Superman), and Jeff Stokely (The Spire, Six-Gun Gorilla).

Print copies of CODA #1 will be available for sale on May 2, 2018 at local comic book shops (use comicshoplocator.com to find the nearest one) or at the BOOM! Studios webstore. Digital copies can be purchased from content providers, including comiXology, iBooks, Google Play, and the BOOM! Studios app.

For continuing news on CODA and more from BOOM! Studios, stay tuned to www.boom-studios.com and follow @boomstudios on Twitter. 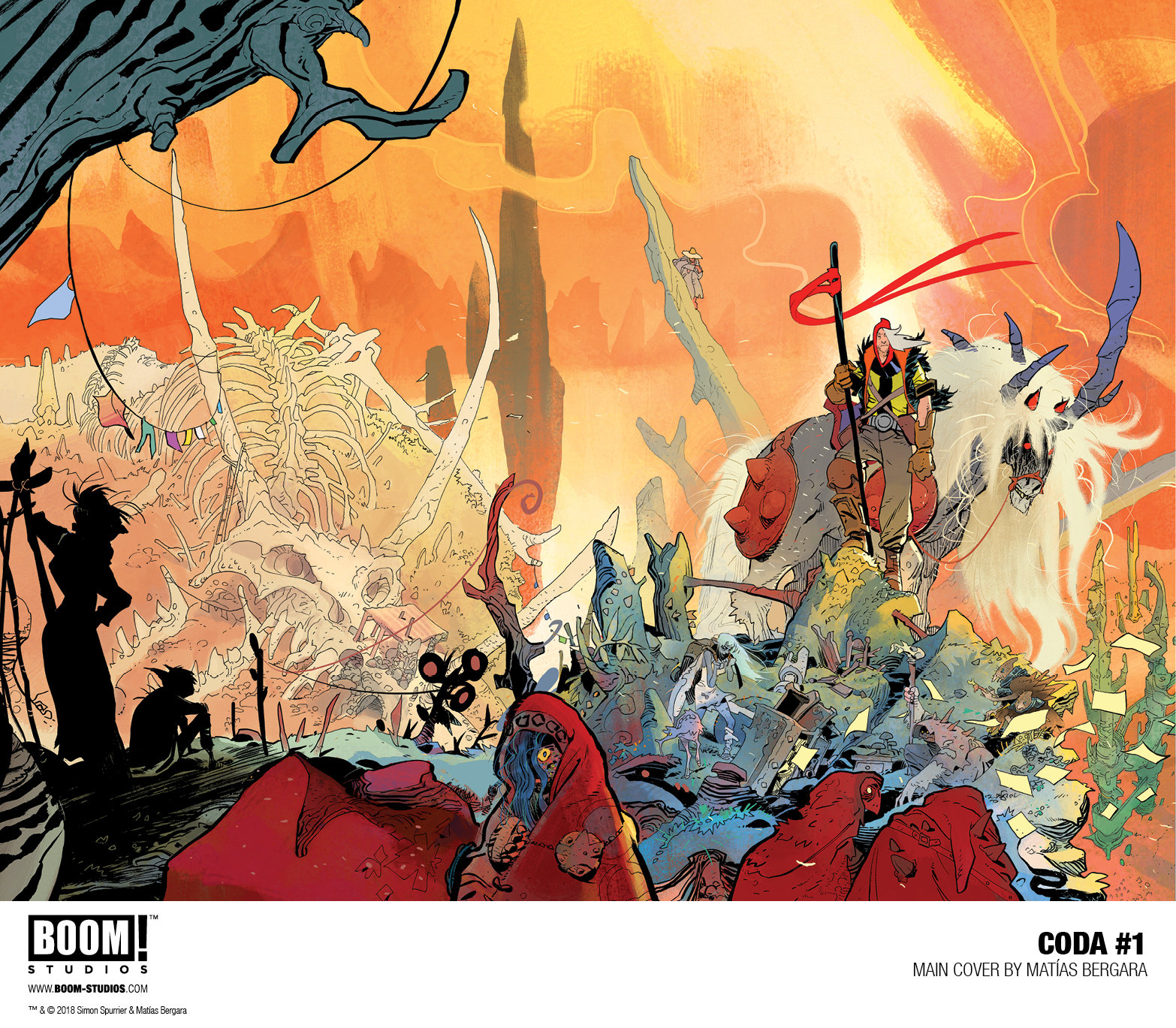 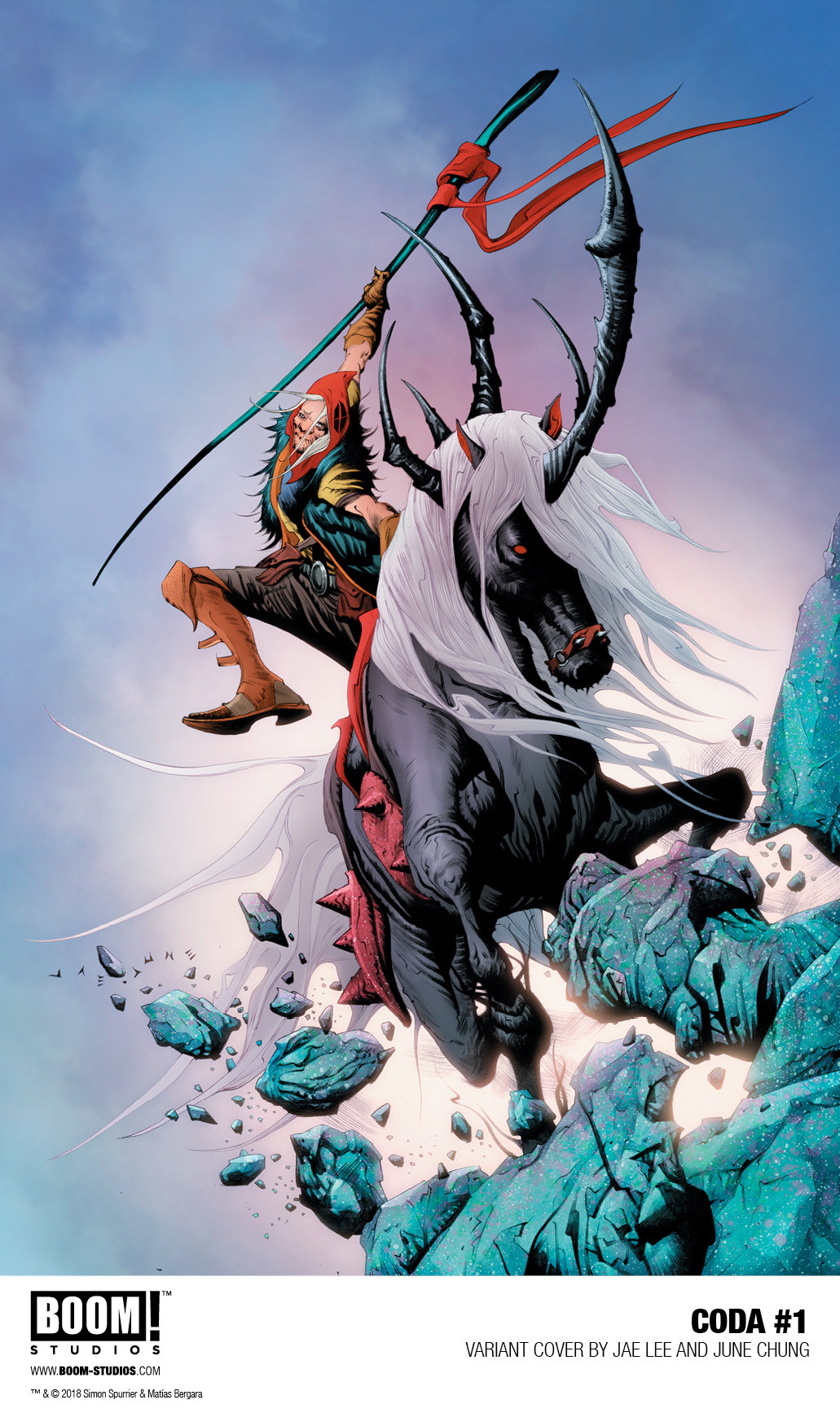 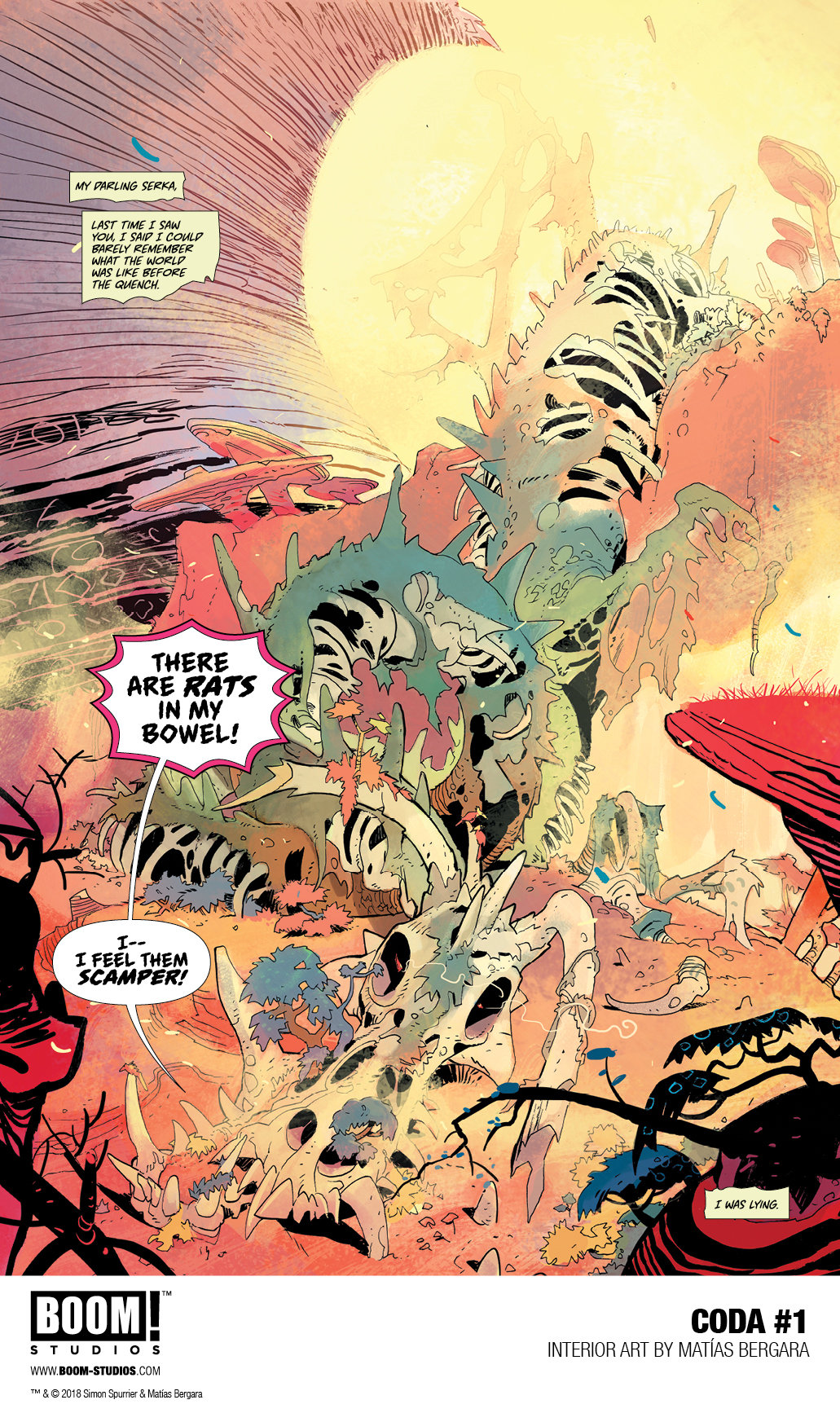 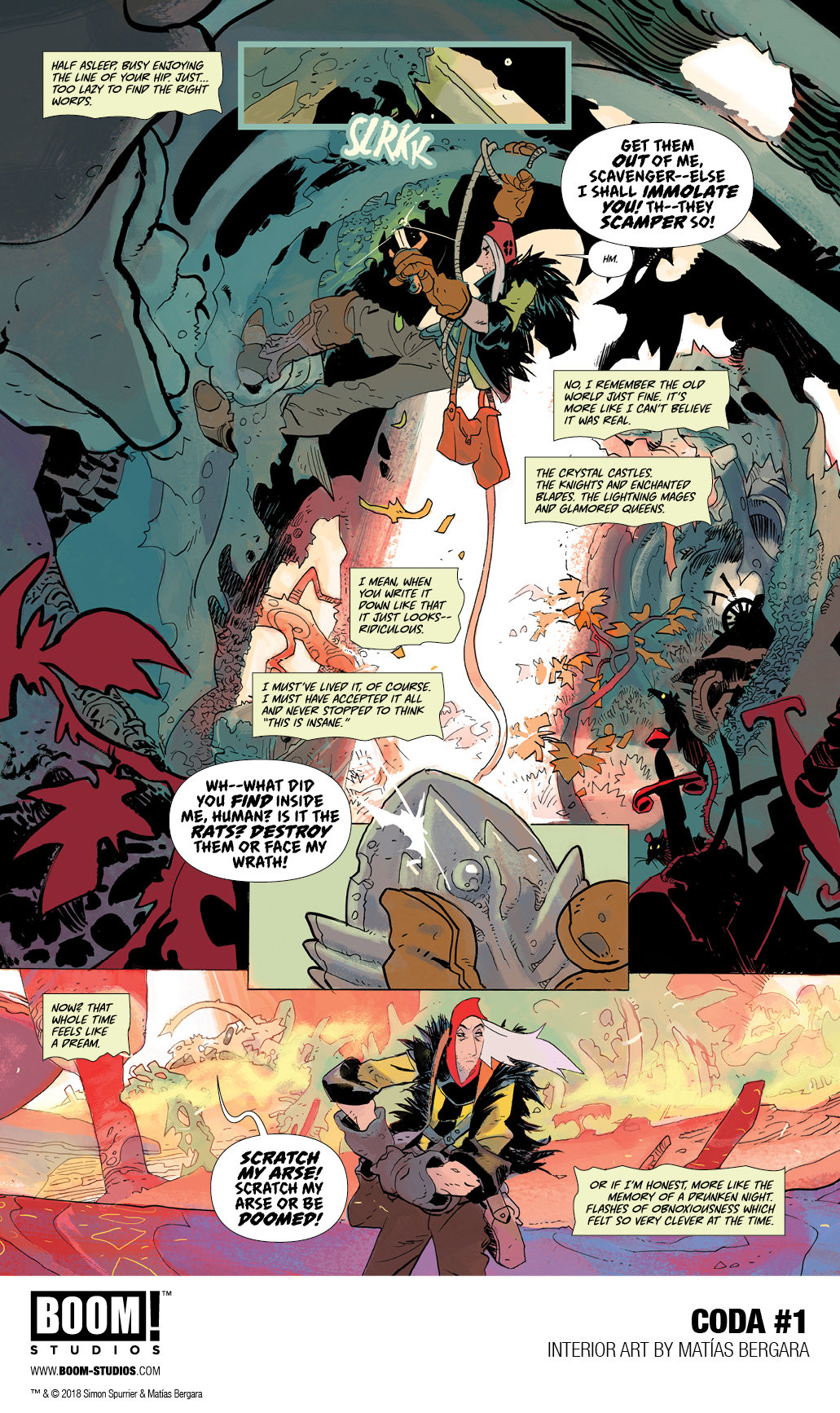 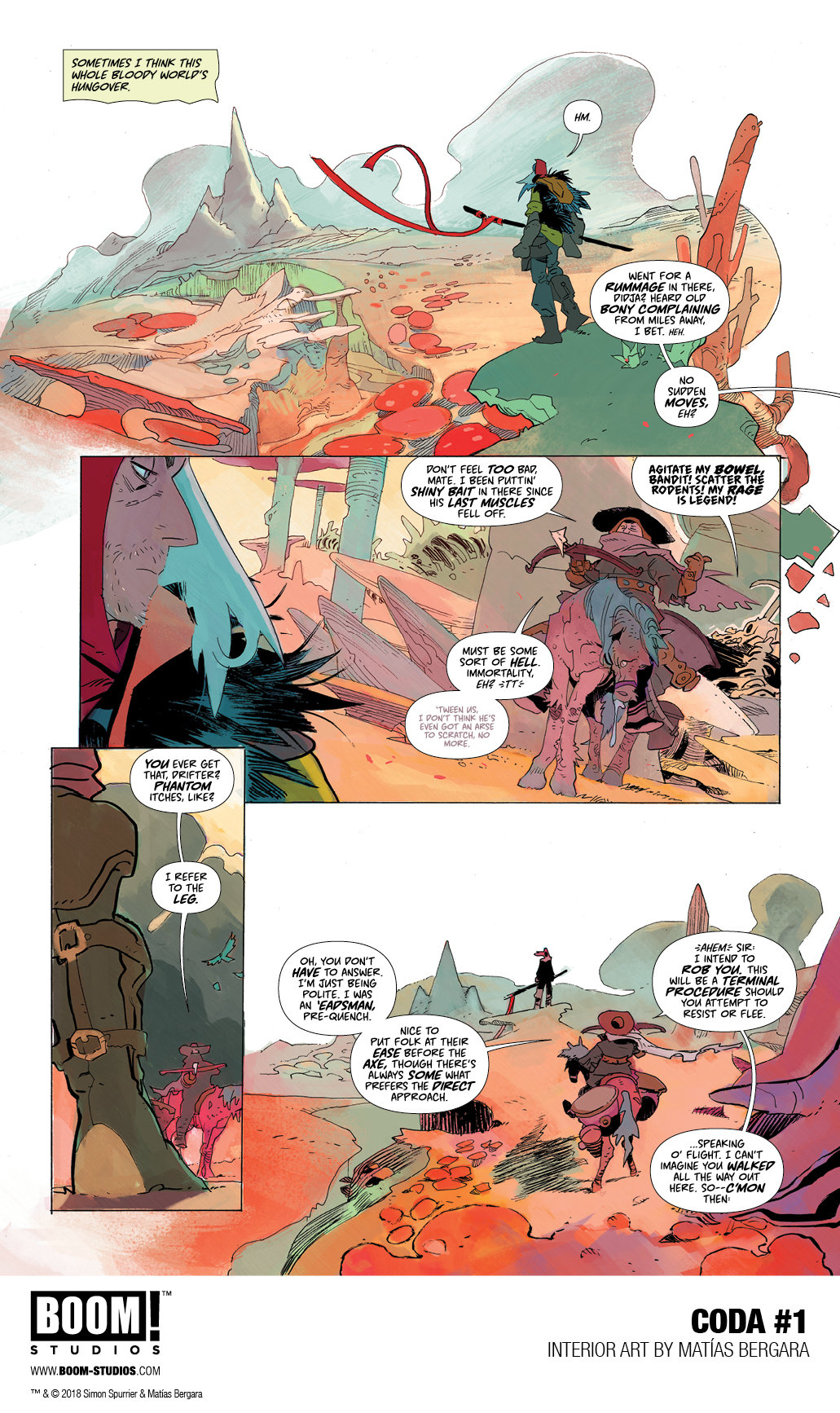 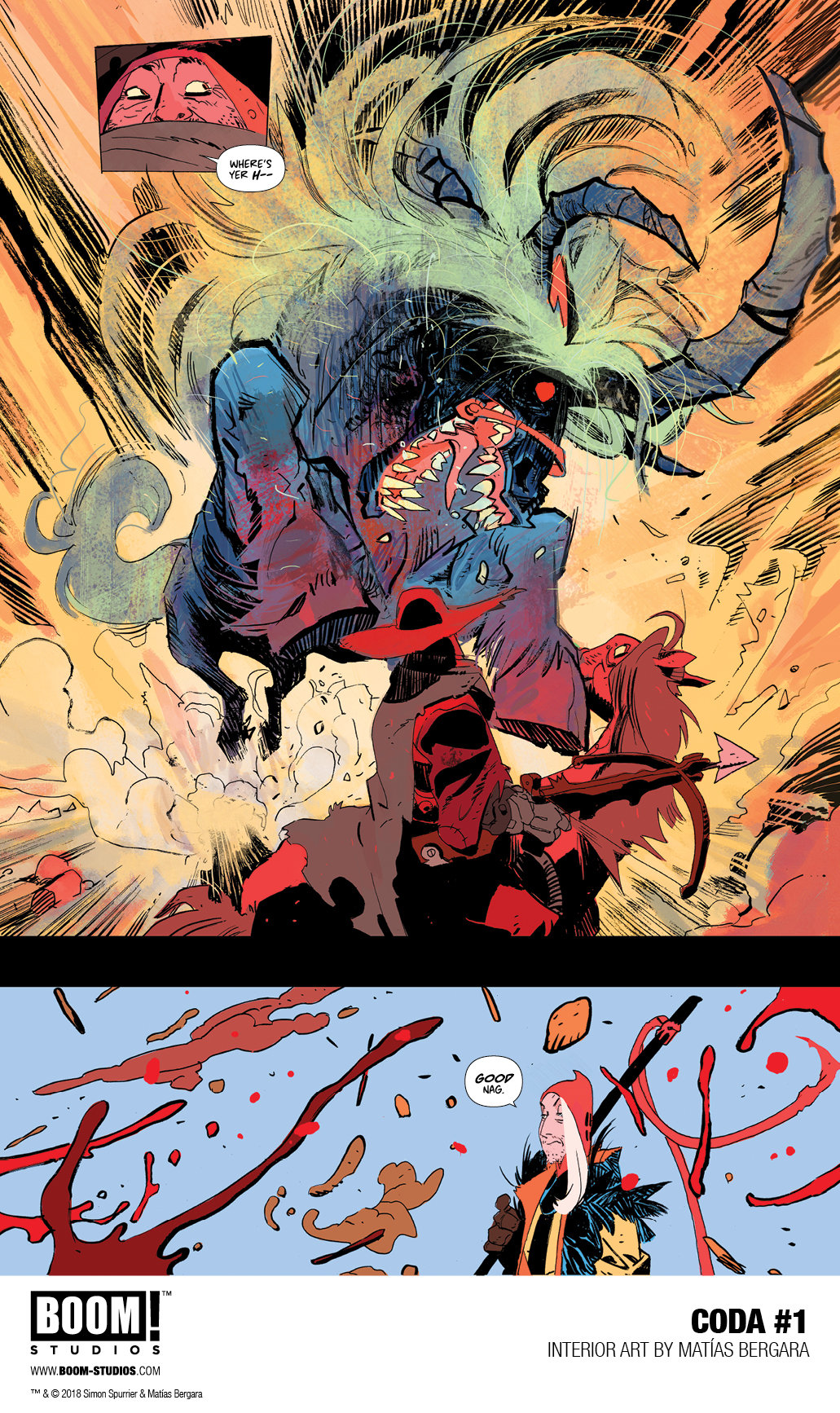 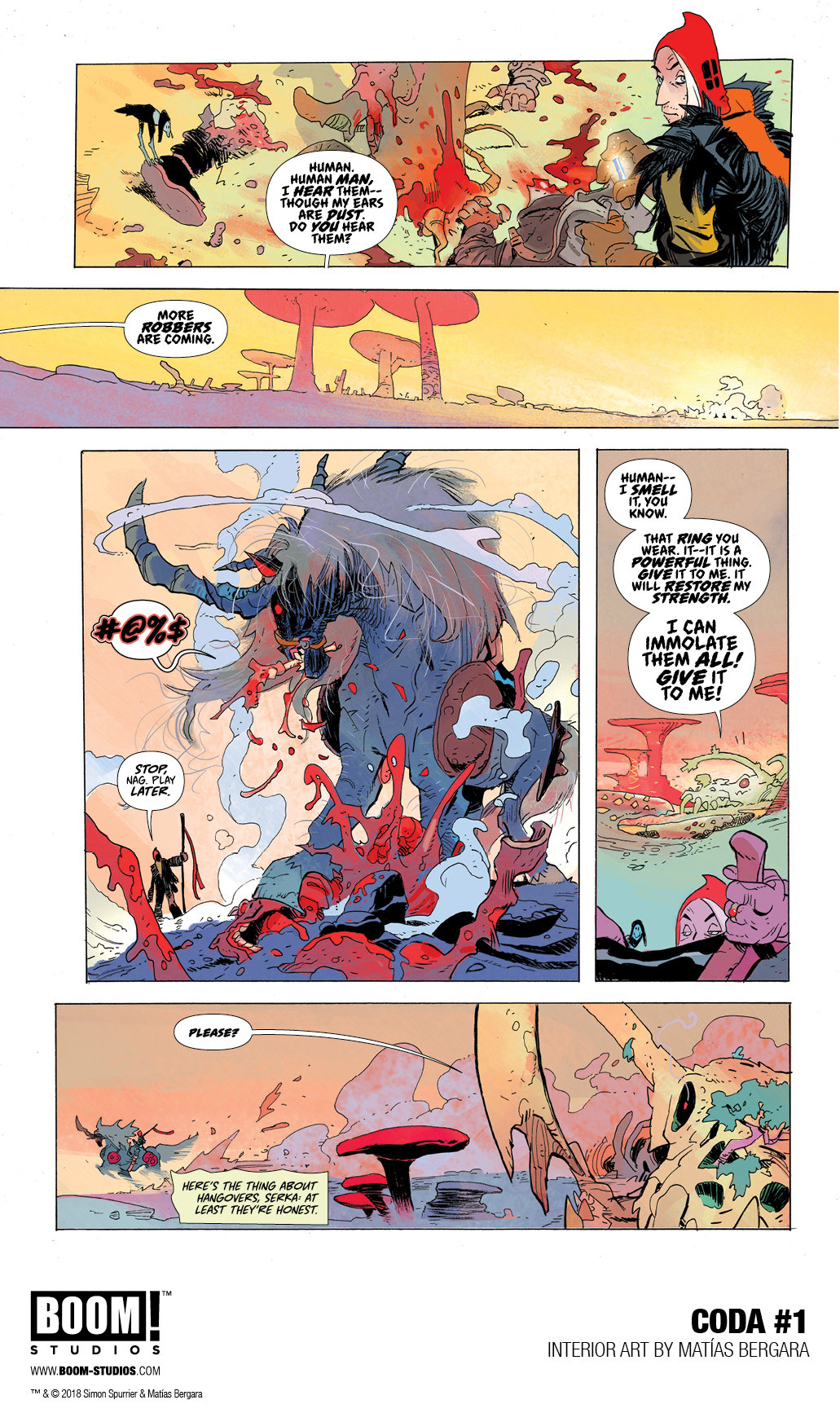 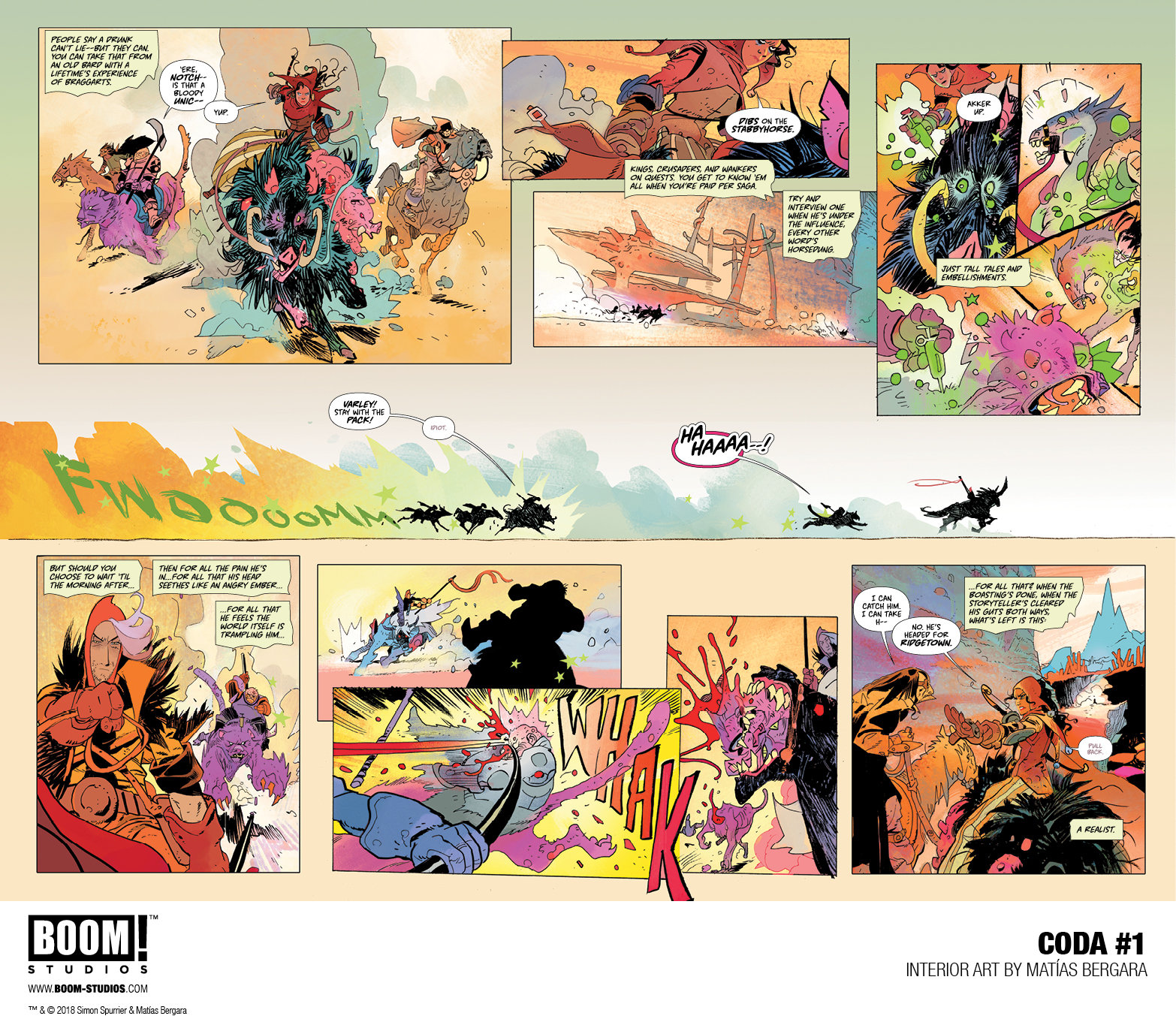 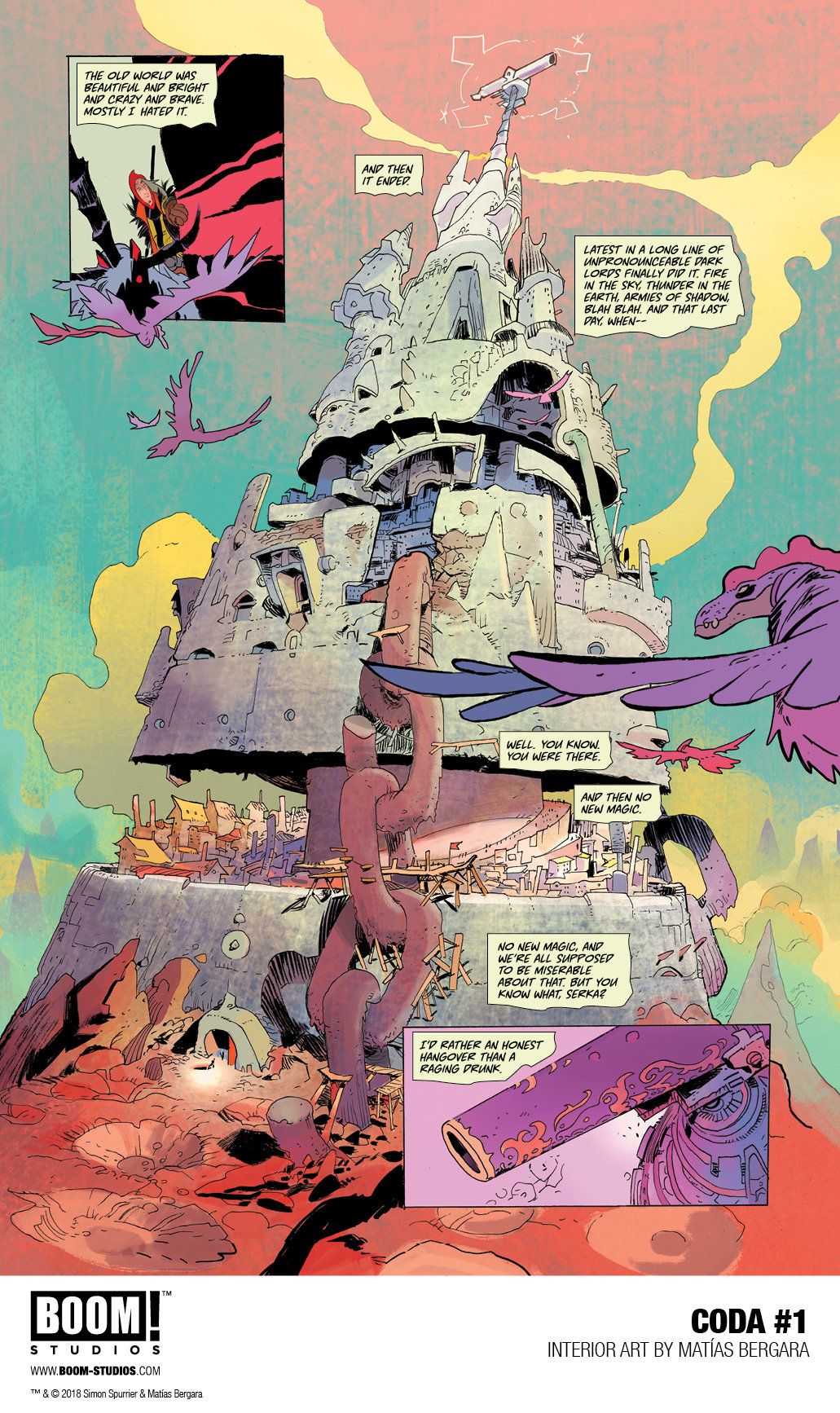 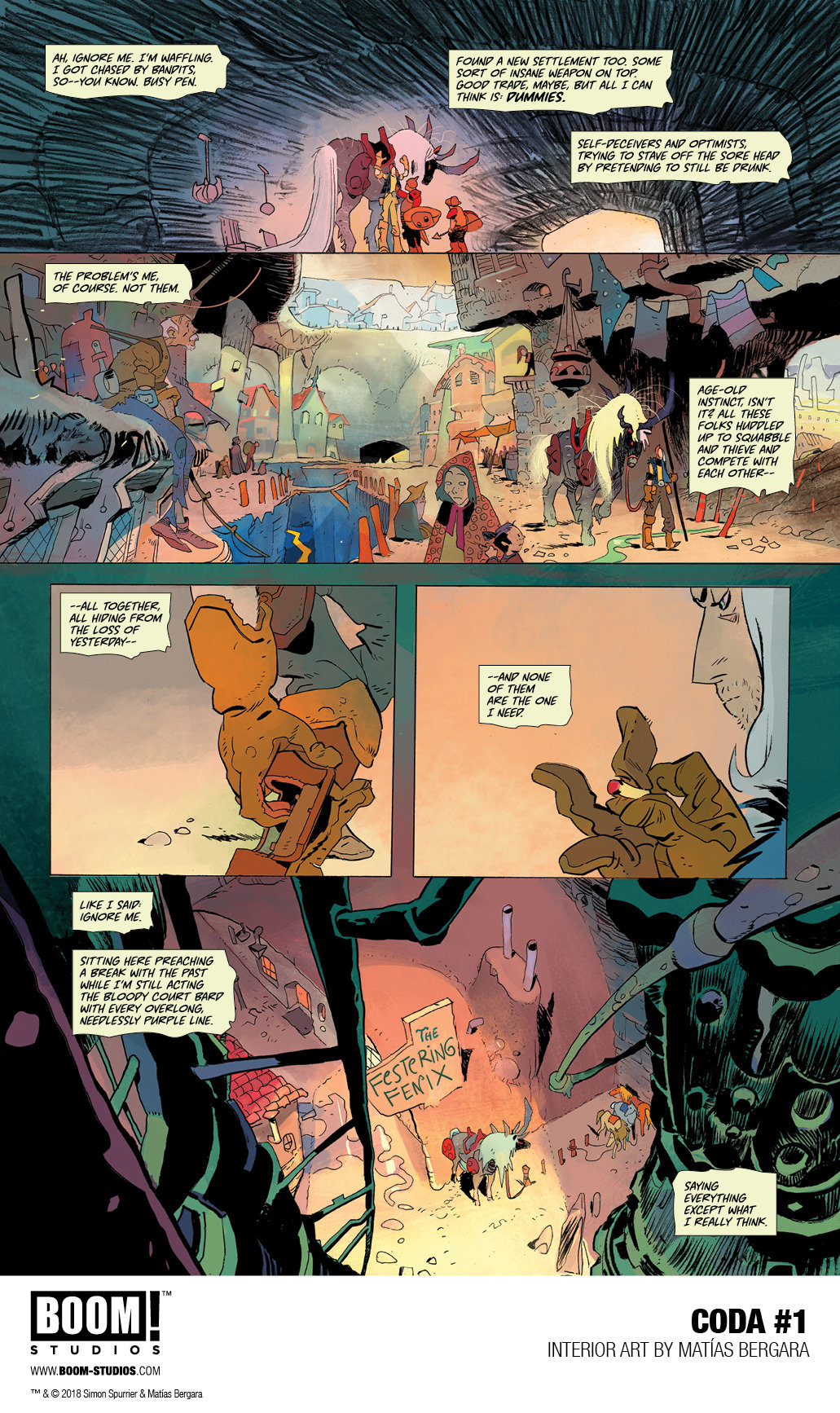 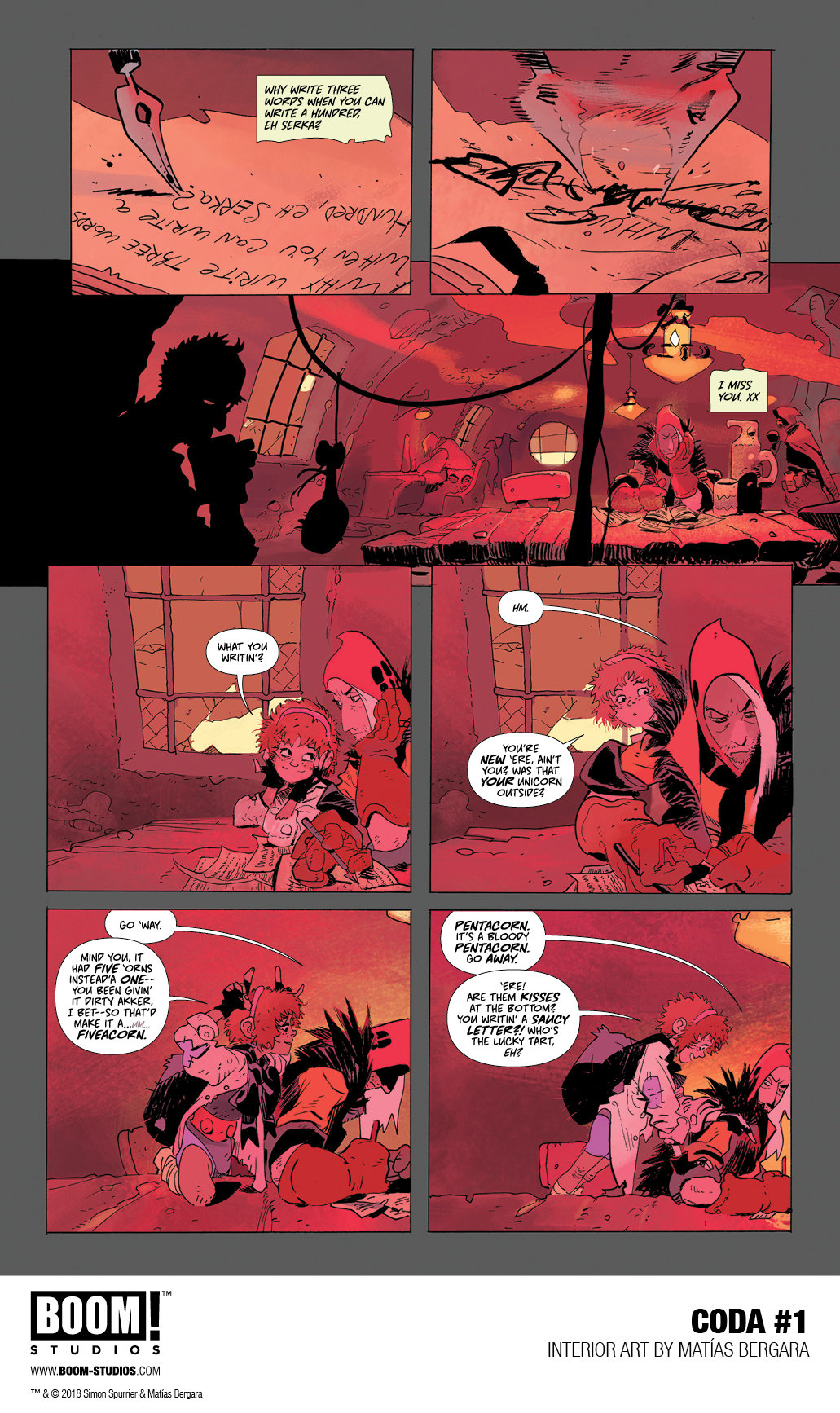