It’s the topic that never dies! Can the comics industry move away from local comics shops and go completely digital?

WHY TALK ABOUT THIS?

As long as I’ve been writing this column and interviewing comics experienced and new pros, we’ve been talking about the future of the industry. Will comics at some point only be available digitally? At an appointed time during the week, will we log onto an FTP site and download our week’s comics? Hey, saves us that trip to the store each week, among other things!

The answer continues to be, well, NO.

Then why bring it up… again?

I know I’m behind when it comes to some technological advancements, but it was just a few months back that I signed up for a monthly music subscription for $9.99 each month.

Frankly, I was skeptical. How can the music industry possibly survive if I only pay about $10 each 30 days? Hey, I’ve poured LOTS of money into buying music on albums, discs, and digitally. How can musicians and others take home an income that makes it possible for them to produce music if I cut back to only that little amount? And how does this work if EVERYONE is only paying that amount each month?

The answer seems to be, much like how Walmart and Target and other stores do it, VOLUME. You get thousands, maybe millions, of people paying $10 a month, and you get a goodly amount of cash distributed to musicians who produce songs that fans download and listen to.

In fact, I now subscribe to two of these services because they each have exclusive music I want. I’m starting to figure this out, finally!

To show just how lazy this all makes me, I fuss that I actually have to LOOK at the pages of my favorite musicians in order to know when they’ve released something new! The nerve! Granted, I follow them on social media and have signed up to receive emails, so I do find out, but not soon enough for me! (I’m still looking for ways to make this all automatic! Remember—I’m slow when it comes to some of this wonderful technology!)

WHAT THIS HAS TO DO WITH COMICS

There are many digital comics subscription services. Marvel has one—Marvel Unlimited. DC has one—DC Universe Infinite. ComiXology has one, too—comiXology Unlimited. And that’s just the first few that come to mind. There are MANY others!

The bad news is—as much as they enjoy throwing around words like “unlimited” and “infinite,” they just aren’t. You often have to wait literally months to get a comic that is being released this week.

As you may have noticed with my impatience when new music is released, I’m the same way when it comes to comics. I don’t want to wait when I want to read the just-released books!

Granted, some of these organizations release material through their “infinite” service FIRST, before it hits the local comics shops. One of the books I can’t wait to read is Jeff Lemire/Jock’s Snow Angels. I want to know what happens to these people! Yes, they are not REAL, but I care about them anyway!

The trick is, it would cause a massive disruption in the comics industry if the same books that are arriving in shops are available digitally at the same time. While I don’t think the number of people who “go digital” first are that big, they’re enough that it would likely force many shops to close their doors. I don’t think we’re ready to only have BIG stores in BIG cities. Some of us still live in smaller communities, and I don’t want to fight the traffic and the crowds to get my books!

The answer so far has been to delay the release of comics digitally enough time so that the shops can make their money first. This can cause the digital version to be held back weeks, most likely months, and even years.

This is why I think “truth in advertising” (and naming) should cause these digital services to be more honest, and maybe call them “Digital Comics When We WANT You to Read Them” or something similar. (Yes, I’m unhappy with the current set-up.) 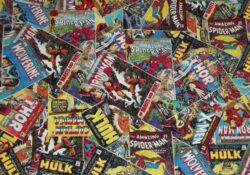 For those of you who are encountering this for the first time, let me list the benefits and concerns to both ways of buying and reading comics.

First, the paper versions are established and, importantly, collectible. You bag and board them, you store them away, and you hope they will substantially increase in value. (I know some folks who hope to send their kids to college by selling them a few years in the future. Good luck with that!)

Also, there’s nothing quite like holding a comic in your hands and reading it. The pages are laid out in such a way that the stories propels you through an issue. That “hands-on” experience has been a powerful draw for fans for decades.

Then, too, we can often select from a variety of covers. Some of these also go up in price over time.

Of course, the bad news is that stories printed on paper are oh-so-easily damaged and destroyed! Collectors love that because, if they have their copy safely stored away, that makes it even MORE valuable!

There are problems with the printing process that come into play as well. What if a page or pages are run out of order? What if the color isn’t printed correctly? (You know, the yellow isn’t lined up with the other colors, for instance.) Again, sometimes if this happens, that can make a good comic more valuable, not less.

I know several computer whizzes who like to point out to me that the computer screen shows many more parts of colors than paper can. It just LOOKS better! That’s the main reason fans who prefer digital have always listed first when I ask them about it.

Then they like to talk about convenience. You don’t have to drive to the store and fight with others for the best condition. You simply log on to your service, choose and pay for your comic, then download and read it. Instant gratification. No fuss, no muss.

Personally, I use digital to catch up on issues I haven’t been able to find in person. That allows me to stay current with the paper releases so I can enjoy the story.

Space can also be a problem with paper copies. I’m facing that right now. I have a bunch of collected editions stored right near me, and I’m literally running out of room to keep more books. Digitally, though, it depends on how much hard drive space I have available. After a while, I go through and delete ones I’m not all that interested in any longer. That makes room for the new stuff! 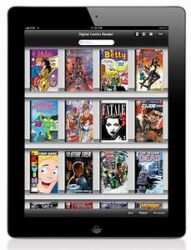 I have interviewed many comics creators, and I often have asked them how they think all this will shake out. Their answer is almost always, “I don’t know.” And they genuinely don’t. I don’t think anyone does!

While I think paper copies will be around for years, maybe decades, to come, I think the digital audience grows, albeit slowly. As younger fans come on board (and we certainly want them to), they are much more computer-oriented than those of us who have been buying paper comics for decades.

I was told by a comics pro in marketing that he showed a paper comic to his daughter who had been used to reading digital books all her life. He set it down in front of her, and when she wanted to turn the page, she placed her finger on the page and flipped it by moving her finger right to left. He was unhappy because it damaged the page, but he realized he was going to have to give her comics she could do that to that wouldn’t cause him to wince.

Until this all sorts out, it’s going to be a “paper or plastic” kind of thing for those of us supporting the comics industry. We want people to buy BOTH versions. They all help keep the industry alive!

Personally, I think there will always be paper versions of comics. However, the number of them printed may decrease to match the collectors who want to buy and keep them.

Am I certain about that? Not at all! That’s just my best guess! Check back in about 10 years or so, and we’ll see!