One of the constants in Titan Comics’ Doctor Who series of comics is change, and with a different showrunner taking over for the popular British TV series, it means big transformations for the books as well! Also, Ncuti Gatwa is the new Doctor!

‘WHO’ HAS A NEW/OLD SHOWRUNNER 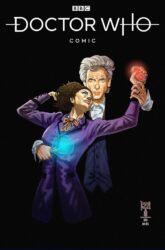 As reported here by the BBC, Doctor Who will have Russell T. Davies in charge—again! Whovians (fans of the show) will have déjà vu all over again since Davies revived the series in 2005 and turned it into a worldwide phenomenon before he left in 2009.

He replaces Chris Chibnall who recently took the reigns of the program for the last few years. One of his biggest accomplishments was to develop the very first female Doctor in the decades of the show’s long lives.

“I’m beyond excited to be back on my favourite show,” said Davies, who returns just as the series prepares to mark its 60th anniversary in 2023.

The weird part about all this is that Chibnall and Jodie Whittaker (the actress currently playing the Doctor) still have an entire season (or “series,” as they call it across the pond) to air in 2022.

WHAT ABOUT THE TITAN COMICS?

Of course, all this has important repercussions when it comes to the successful Doctor Who comics franchise coming out from Titan Comics.

One of the staples of the show as well as the comic has been teaming up several incarnations of the Doctor. Most recently the Tenth and Thirteenth Doctors have been working together until issue #4 in February of this year.

Then everything switched over to a miniseries featuring Missy, previously known as The Master before he had a gender change. You just never know what changes the Doctor and his opponents are going to go through! The fourth (and final) issue came out in July, and it contained a meeting of the Third and Twelfth Doctors as well as the female Master.

I have a feeling Titan had their fingers on the pulse of what was taking place on Doctor Who, and that’s why they switched to a miniseries. It only makes sense to reboot an ongoing series if it features the latest Doctor. Really!

Granted, not every fan of the TV show buys the comics. But I can’t see any comics readers who haven’t seen the show, so they still play a very important role in the franchise.

THE COMIC AND TIME TRAVELLING 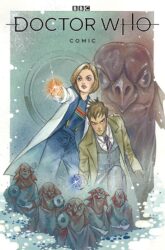 Honestly, this changing of the guard on Who has been a problem for the comics over the years. Since it takes a long time to organize and execute a comic book, the comics often have found themselves “behind the times” regarding just which Who is Who.

Anyone who has put together a comic book knows there’s a process to all this. First, you choose the characters. Then you come up with and get that story approved. Then you write the script and get the art created. Then you have to get all that okayed and go to press. Once it’s printed, you have to get them ordered by stores around the globe and shipped to the various local comics shops.

That can literally take months to years to accomplish! All you can do is pray nothing big shakes up your status quo on the series.

Even then, Titan still might be releasing comics with the “old” Doctor in it after a new one has taken the role.

The funny thing is, particularly when it comes to Doctor Who, there’s a routine the show seems to experience. First, the new person gets announced. Invariably, fans hate the choice and pronounce it the end of the program. Then that person appears on the small screen and fans begin to warm up to him or her. Over time, they grow very fond of that person. After a few years, that actor or actress decides it is time to move on, and fans grieve at the loss.

Then it starts all over again. Really.

If Titan is putting out too many comics highlighting the previous Doctor over an extended period of time, many fans have “moved on” to the new regime. Sales might begin to dip. Some in the industry declare the franchise dying or near death.

I’ve seen this happen so many times that I can now only laugh at it.

WORKING AHEAD OF TIME 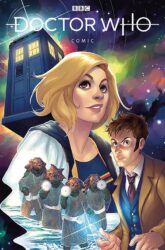 Although I’m sure the BBC would rather hold their cards close to their collective chests, I think the decisions and announcements of changes, particularly when it comes to new Doctors, should always happen as soon as possible.

Yes, they might see a reduction in viewers during the “farewell” season of the latest Doctor, but when it comes to marketing and especially the comics, Titan needs that time to plan ahead. They need to be as close as possible to being in sync with what’s happening on the small screen.

If not, I believe the franchise suffers from being “out of phase” with itself. Yes, you can bring all the previous Doctors (or even Masters) in you want, but it still feels like the franchise is not “together.”

Besides, the fans want to know! Lately, when it comes to announcing a new Doctor, they’ve turned that into a global TV event! After all, if they don’t do that, the Internet will do that for them, and those Web “gods” may not give the change the right “spin” that the BBC would prefer. So, they have to make it happen simultaneously around the world. Honestly, that’s not a bad problem, when you think about it.

So, what should Titan be doing right now?

I would recommend dispensing with the ongoing Doctor Who title and replace it with a group of miniseries’ featuring team-ups of previous Doctors. Either that or focus on some of the popular companions or other guest stars. Or you could even have a Doctor working with a companion he or she had never met before. I think that could sell pretty well. Hey, I bet the live show wishes they could do more of that!

The goal needs to be: Stay as close to current as absolutely possible! I think fans will be more understanding the harder you work to make that happen. Granted, Titan can’t help some lag in time over the next couple of years. It takes time for a new (or even a previous) Doctor to take shape. I just hope that BBC treats Titan Comics as kindly as possible. I think it would benefit both companies to do that!

I’ve waited until now to say that I’m happy change is coming! I have been happy for young girls who got a role model out of Jody Whittaker’s Doctor. However, I haven’t found the stories very compelling or even interesting (nothing to do with the actress, I’m sure), so I would love to see something resembling a Doctor Who more like it’s heyday back in the 2000s or so.

The biggest concern has to be—does the show continue with another female Doctor? Or do you do something like bring in a diverse Doctor of color? Or do you go back to a white male lead? These are the things Davies has to consider in the next few months. I don’t envy him making that call!