These days, I sometimes can’t be sure if I’m reading a Marvel comic or a DC! 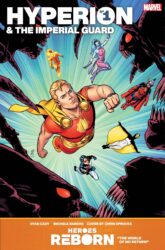 If anyone else has read the “Heroes Reborn” event at Marvel, you just may have noticed how close to DC that storyline is.

For instance, Hyperion can “jump over tall buildings in a single bound.” He might be able to “stop locomotives” and do other “super” things.

He even has a photographer for a “pal.” This time, though, that guy’s name is NOT Jimmy Olsen. It’s Peter Parker.

Of course, anyone who has been reading the House of Ideas for a long time as I have recognizes that the Squadron Supreme (otherwise known as the Squadron Sinister when they were bad guys), if you squint your eyes, just could resemble a group from the “Distinguished Competition” that has the initials of “Justice League.”

Hyperion is Superman. Nighthawk (my personal favorite of the group) is Batman. From there, the rest are pretty easy to figure out.

Marvel has made several attempts to make comics’ series’ based on these characters ever since they first appeared way back in Avengers #69 and went on to battle the group in the following issue, #70. Hyperion, for instance, has had several miniseries’ of his own, as has Nighthawk. The latter has been a diverse character at times, but not always.

Believe it or not, I have a friend who never made the connection. He though they were completely original to Marvel. When I pointed it out to him, he was surprised that Marvel would DO such a thing!

Now they are the stars of “Heroes Reborn,” which originally featured the main Marvel heroes given an “upgrade” years ago.

I’m entertained by this reworking of the DC heroes into the Marvel Universe on several levels. First, the old adage that “imitation is the sincerest form of flattery” works in both directions. Yes, DC has also brought some Marvel characters into their universe as well at times. More on that later.

I’m also wondering if Marvel is admitting that their fans actually KNOW the DCU. Many Marvelites Maximi, as I call them, are quick to tell people the adage they adhere to—”The worst Marvel book is better than the best DC comic!” I’m seeing some puzzled looks on the faces of those fans as they read this comic! “Why is Peter Parker hanging around with Hyperion?” Well, duhhh!

The thing that intrigues me the most is, why? Why make a big event that focuses on the main guys from the company you won’t allow a crossover with these days? Does Marvel honestly think that they can do a better job with those characters than the “other” company has been doing for decades? DC beat them to the punch with their recent Crime Syndicate comic based on Earth-3 anyway!

Maybe it’s since Marvel’s sales consistently outpace DC’s. Perhaps the House of Ideas is flaunting that they can use the “same” characters and get better sales with them.

However, just how many versions of Batman does Marvel have, anyway? Moon Knight, Nighthawk, Punisher, and even Wolverine have been considered the House of Ideas trying to make a go out of a Batman-ish character. Only one of those continues to fly moderately high, so to speak.

Or it could be that the House of Ideas is, after all these decades, finally turning to DC’s heroes as something they should pay attention to. (Yeah, I don’t believe that one, either!)

What “Heroes Reborn” has accomplished for me is that I now buy more Marvel’s than I have in a long time. See, I always follow the Squadron (regardless of their last name), and the store owner knows that!

So I’m reading these books and smiling to myself about the extremely close DC-isms they are using in this event.

I’m hoping that maybe—just maybe—Marvel will finally get the Squadron in a place where they’ll sell comics each month! Hey, I’d buy that! 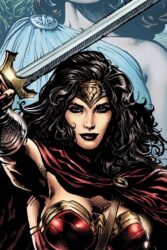 It just strikes me as odd that, while “Heroes Reborn” was going on “across the aisle” (I say that since a LOT of fans look at the comics companies like political parties), DC was following suit!

If you’ve been reading the latest storyline in Wonder Woman, well, you just might recognize some of the gods there.

Diana has been interacting with the Asgardians—at least, one DC version of them. Yes, we’ve seen Thor and Odin, just to name a couple of them. Diana seems to be teaching those gods some needed lessons.

Is that what DC thinks Marvel should be learning? We’ll see!

Granted, Marvel doesn’t own a copyright on the Roman mythology. ANYONE can write about them. I recall an Image book that focused on this pantheon recently.

But I find it interesting that DC doesn’t mind focusing some attention on this group while they MUST know that some of us long-time comics readers can’t help but think of Marvel’s version of these people.

Look—I have a friend who complains that Marvel’s Thor isn’t the REAL one. Apparently, she knows what that one looks and acts like. How she “knows” that is something I really don’t care to learn about.

But the House of Ideas has been using Thor in comics and TV and movies for decades. OF COURSE those of us who have been at least perusing Marvel’s product for even part of that time can’t help but compare any other versions to the god in Marvel’s books.

Again, I have to wonder if DC is trying to tell Marvel, “Hey, we can do a better job with these characters than you can, House of Ideas!” Of course, with sales being an important factor, I somehow doubt that these issues of Wonder Woman actually outsell Marvel’s Thor title. But again, we’ll see.

THE LINE BETWEEN THE TWO IS NOW BLURRY 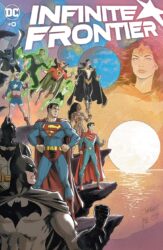 So, these days I find myself asking more than ever, “Am I reading a Marvel book or a DC comic?” Sometimes I honestly can’t tell!

I guess in the long run this is a good thing. I’d like to see DC giving Marvel more competition than they have been. Hey, I wouldn’t mind if DC would outpace the House of Ideas again as they briefly did during their “New 52” event!

However, I’m just not sure if “Infinite Frontier,” which I still interpret to mean “anything goes,” will boost DC past Marvel. The good news is that this isn’t as important to me as good stories that are well told.

So far, I’ve been pretty happy with DC’s not being severely limited to just one continuity. Batman Superman has been intriguing, for instance. I don’t mind more of that, frankly!

But I just find the timing of “Heroes Reborn” to be interesting. Right as DC launches “Infinite Frontier,” Marvel decides to show they might do it!

As entertaining as that concept might be, the answer is obviously, NAHHHHHH!

The competition between Marvel and DC will continue for now. Yes, I’d love to see more crossover (or at least, something) happening along those lines.

But it’s going to take someone of high caliber stepping up and showing both companies how they BOTH could benefit from that. Right now, Marvel doesn’t want to give ANY support that could help DC.

And I get that! You do what you have to when you want to stay on top. I just think—and I believe “Heroes Reborn” and Wonder Woman are showing this—that cooperation would be better for the fans than competition.

Good luck on that changing anytime soon, though!