If you’re a collector or even just a fan, these are tough times we’re going through to get our comics. Really.

If the store you frequent is ordering comics through Penguin House (affiliated with Marvel), you may have been disappointed recently.

When their first shipment of comics arrived at local comics shops not that long ago, many of them looked as if they were literally beaten into submission. Boxes were bleeding comics out of them, and most of the issues were unsellable. Some were even tough to read.

I was looking forward to the latest issue of Defenders, which has a quirky line-up, among other things. Sadly, the store I go to told me they didn’t have any copies I could buy. They were shorted, which might have been a good thing instead of getting paper copies that looked like someone had sat on them for hours. Maybe next week.

In fact, Penguin has apologized for how it all went. They want to do better in the weeks ahead. I hope they will.

That was bad enough, but DC is also facing serious delays, many books apparently arriving months later than originally scheduled.

Paper shortages and deliveries behind their scheduled arrival dates are making so many delays that I couldn’t begin to list them all here. I know. I’ve seen those lists.

It’s not like comics fans haven’t previously had to deal with delays and damage. Oh, yes, we have! We just hoped that most of it might be behind us.

Turns out that’s not the case.

The biggest question we always want answered is, why? If our stores placed their orders in a timely manner, why aren’t the comics getting to us when we were told they’d be there?

Of course, there are a lot of reasons, and some may be more pertinent to different circumstances than others.

Supplies continue to be in serious demand. Thankfully, my local grocery store shelves have a lot of paper products again. I haven’t had to face an empty wall where toilet paper and paper towels were supposed to be in a long time.

I know that in the grand scheme of things, toilet paper and related products are what more people want than comic books. But we should be able to have them all!

Also, a lot of people have made changes to their work situations. Some have found they can make it without jobs. Good for them. I also see stories on the TV about restaurants having to close their doors because they can’t find enough people to provide the service they need.

I’m not sure how much of this is impacting the comics industry, but it’s clear we’re in a period of transition from where we were BEFORE COVID-19 to where we’re going to be. 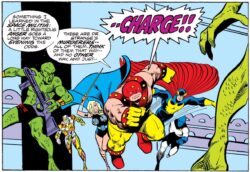 Of course, those lucky people who have received pristine copies of certain comics are likely to make a killing when they decide to sell those books. I expect they will get top dollar for the few copies making the rounds.

That’ll be great for their wallets! However, it’s going to make it a challenge for those of us who just want to have a copy to read so we can enjoy the stories. Will we become “new” collectors, or will we have to re-evaluate our status as fans?

I’ve talked with some of my collector friends, and they see this as one of those rare opportunities to benefit from what is currently happening in the comics industry, although they don’t use that exact phrase. “Demand will increase as supplies decrease,” as one of them described it to me.

As a fan who is more of a reader than a collector, I have to say that I’m happy for digital comics services like comiXology and drivethrucomics.com and such. If I have to, I can buy electronic versions to read. In fact, I may never crack open many of the comics when they finally do arrive.

Isn’t that the true nature of comics, he asked wryly?

I’m sure digital services are going to coordinate with the comics companies to make sure they are in sync when it comes to release dates. Stores still need to sell their paper copies to stay in business, after all.

WHEN WE GROW UP 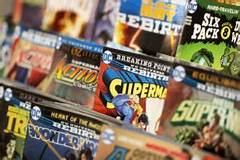 As readers of this column know, I often find myself wondering what the comics industry wants to be “when we grow up.” You know, when we finally figure out how we’re going to make it in the years ahead.

With the comics industry continuing to teeter on the edge, I remain worried. Every time a serious setback hits us, we seem to lose more stores and fans. How much more can we try to do without?

We continue to adapt to how stores and fans do business, as it were. When I encounter a local comics shop that doesn’t get their books in on time, that’s fewer dollars they have to run their business. And that’s actually bad for fans like me. If, like the aforementioned restaurants, neighborhood stores can’t open their doors, that makes it harder for customers since we’ll have to look around to find another shop to buy from. Or even mail-order from.

I know I say this every so often, but it truly does bear repeating—support your local comics shop as much as you can! Yes, I know we sometimes need alternatives. If my LCS doesn’t get what I need for whatever reason, I do know what I’ll do next to get my books. Of course, I prefer we don’t make a habit out of that. I like to walk in the front door of my LCS and have the cash register automatically open because it knows I’m there to feed it. It’s the way we all like to do business.

No matter how late or how much we prefer perfect condition, if we have to pick up less-than-ideal copies of the books we enjoy, many of us may need to swallow hard and actually buy those copies so we don’t lose the comics we want.

In the end, I want to be able to buy and read my comics more than I want perfect condition! Who’s with me on that?