Robert Kirkman’s Oblivion Song officially reached it’s end not that long ago. A comic that actually came to a conclusion—how unusual is that! 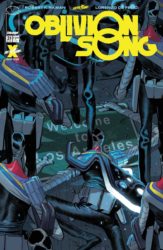 The final issue of Oblivion Song recently hit the stands! Sadly, I wasn’t buying that book, but my friends tell me it was an event something similar to The Walking Dead’s sudden wrap-up. This ending was confirmed in issue #30’s letter column.

Interestingly enough, the cover for issue 31 had been released. Again, Kirkman had done something similar with his other famous comic.

The good news is that Oblivion Song has been optioned for a movie, so fans of the story will likely see a live-action version on the big screen at some point. With Hollywood starting to move into making new product, we’ll likely hear more about that in the days ahead.

TWD is back on the air with new episodes with the most recent one airing just last night. I understand that the series will come to an end very soon. I did stop watching it after the comic ended, though. 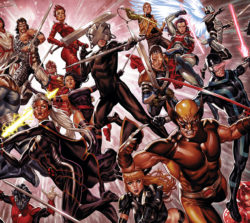 I was particularly intrigued when this comic ended because it’s an odd occurrence these days when that happens. Granted, some are cancelled and we don’t hear about it, unfortunately, something that still bugs me.

However, a lot of comics have gone on for decades. Those are easy to name. From DC, we get Superman, Batman, Wonder Woman, and the like each month. Marvel releases new issues of Spider-Man, Avengers, Iron Man, and many others each 30 days or so.

The perception is that MOST comics come out on a very regular basis. This is because that’s how the whole industry functions. Yes, the companies want their characters and stories to arrive on the big or small screen because that makes a lot of money for them so they can develop new issues or characters. But most comics come out each month so the storytelling (and the income) can continue.

My favorite in this category is the X-Men group of comics. They have literally been released on a very regular basis for decades, and in order to understand what’s going on this month, you need to have read and remember all the previous issues. Every so often, something happens that harkens back to two or three decades ago. The fans who keep up with these books nod their heads in understanding while the rest of us often have to ask, “What’s THAT all about?”

This is how franchises are built.

I know several collectors who have “a complete collection” of a title. They’ve scoured conventions and online lists of what other collectors have and are offering for sale so they can buy it and have that sought-after accomplishment—“I have them all!”

This is where the mini-series comes in. Let’s say you have a story, but it really isn’t one that should go on for years and years. The obvious thing to do is the print a limited run of issues, and that’s what we call a mini-series.

Sometimes, though, we get a mini-series that happens outside of a regular ongoing comic. Batman is famous for this. He often has tales about a specific incident in his adventures, and those can be pulled out of the regular comic run to actually make “a complete story.”

For those who may not know exactly what that is, it’s a tale that has a beginning, a middle, and an end. That last part—“an end”—is something not every comics reader is familiar with since many comics don’t come to a conclusion or any sort. This keeps the cycle going—you buy the book every month to keep up with it.

Every so often, a company or a creator decides to bring a story to an end. There are good and bad aspects of this practice. Every ending is a good “jumping on” point. But it’s also a good “jumping off” point, as some companies have discovered.

There used to be a company called Kickstart Comics. They released, in each volume nearly all the time, a complete story. I applauded their efforts! I loved actually reading a story that ended! It threw everything up into the air because, if the story wrapped up by the end of the book, literally everyone and everything was in jeopardy! You didn’t need the characters to come back, so everyone could die! I loved that, honestly! I didn’t know what was going to happen!

However, if you Google “Kickstart Comics,” you won’t find much today. Usually, your browser will go to Kickstarter, the crowdfunding site. The Kickstart Comics Facebook page these days reposts current events stories. Their website, kickstartcomics.com, is now available for purchase.

That is such a sad thing to me. But it’s an example of how comics stories today just can’t end. If they do, that’s often the end of the company as well as the story.

SOMEONE BUCKING THAT TREND

When I come across a comics company that actually tells complete stories a lot of the time, I like to draw your attention to them!

Recently, I discovered Magnetic Press (magnetic-press.com), an admittedly smaller company that mostly prints graphic novels and stories that provide stories that are different from your average comic book. I interviewed Mike Kennedy from Magnetic Press recently for my podcast, and I was smitten! The tales they are making available in the U.S. are often from Europe and other countries, but they are often complete stories. Sometimes just the concept grabs me. For instance, there is a book called Meka, and it’s described this way:

In a future where civilization is defended by giant, humanoid vehicles known as “Meka,” two pilots learn to deal with the consequences of their unquestioning dedication to military duty when their vehicle is incapacitated in the center of a once-thriving city they themselves turned into a war zone!

I mean, I’m fascinated to see how this story is told and where it goes!

Then there is a group of books called Love, and the stories deal with wild animals. Each book focuses on a day in the life of one of them. There is a book about a dinosaur, another about a fox, then one about a lion, and another about a tiger.

They recently ran a Kickstarter for Monolith, a “lushly illustrated survival tale.”

Granted, Magnetic does also sell several series’ of stories, including Gun Land, Infinity 8, Klaw, and Orphans, all tales that take more than one volume to get the whole story. But they are all fascinating concepts and are very different one from another.

I love their unique take on storytelling that makes them stand out in today’s industry. I will be supporting them a lot moving forward, and I hope you will at the very least check them out!

It’s great to see someone telling stories that actually end, and I hope they will be a big success! I hope the comics fandom will be supportive of tales with a beginning, middle, and an end, and that this variety in storytelling will help the industry move forward into a brighter future!