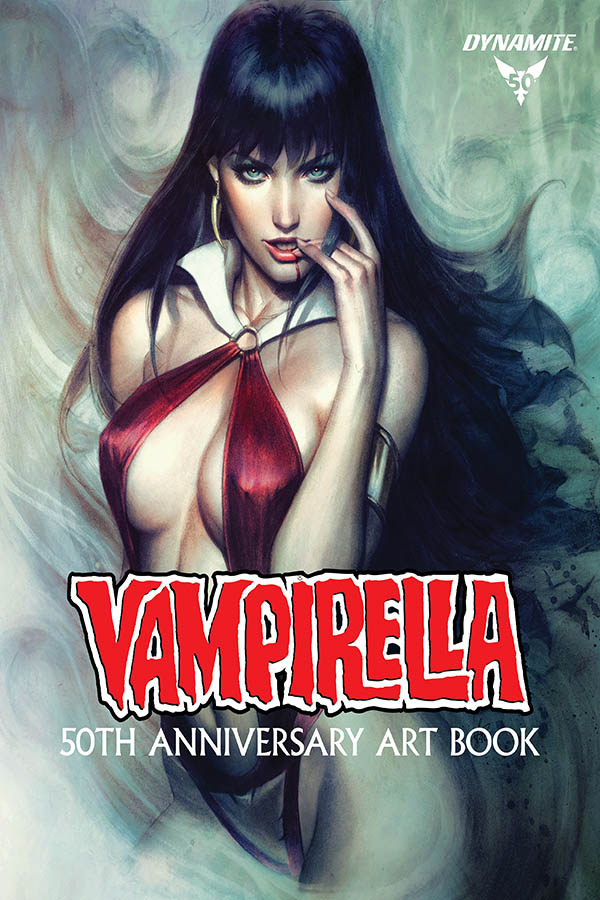 This breathtaking tome reproduces countless already and soon-to-be classic portrayals of the Daughter of Drakulon on beautiful oversized pages. Picking up right where ART OF VAMPIRELLA: THE DYNAMITE YEARS left off, this brand-new hardcover volume features hundreds of covers, including well over 40 from 2019’s smash hit Vampirella #1. Plus covers from the critically acclaimed 2014 run by Nancy Collins, the Linsners’ masterpiece Roses for the Dead, and much more from the Vampi archives.

“It’s always a pleasure to see so many talented artists, such as Fay Dalton, Jenny Frison and Ben Oliver come in with their contributions every month portraying our favorite vampiress,” said Cathleen Heard, Dynamite Art Director. “Many of these pieces are so impressive that we know fans will appreciate them compiled and presented in different ways to truly celebrate this anniversary. Our production and design team always strives to put together books that reflect the prestige of our characters and properties.”

Vampirella debuted 50 years ago in the first issue of her self-titled magazine. Originally put out through Warren Publishing as a horror, sci-fi and fantasy anthology alongside sister titles Creepy and Eerie. Intended as a campy hostess, the heroine built up by James Warren, Forrest J. Ackerman, Trina Robbins and Frank Frazetta became a quick fan-favorite in her own right. Especially once comics legend Archie Goodwin and a young Spanish artist named Jose “Pepe” Gonzalez got their chance on the vampiress, she became the decades ahead of her time frontrunner of a new kind of comic book heroine. Across stories incorporating sensual and gothic art as well as unparalleled action, the “Scarlet Legion” became one of the most passionate fanbases. Picked up by Harris Comics for the 1990s, Vampirella fulfilled her promise in leading a wave of “bad girl” antiheroines that lit up the sales charts and captured fans’ interest. Since 2010, her new owners Dynamite have proudly continued her adventures through critically acclaimed series and crossovers, such as the 150,000-selling debut issue of Christopher Priest’s flagship run.

Fans will not want to miss this testament to her legacy.

The VAMPIRELLA 50TH ANNIVERSARY ARTBOOK will be solicited in Diamond Comic Distributors’ December 2019 Previews catalog, the premier source of merchandise for the comic book specialty market, and slated for release in February 2020. Comic book fans are encouraged to preorder copies of the issue with their local comic book retailers. It will also be available for individual customer purchase through digital platforms courtesy of Comixology, Kindle, iBooks, Google Play, Dynamite Digital, ComicsPlus, and more!