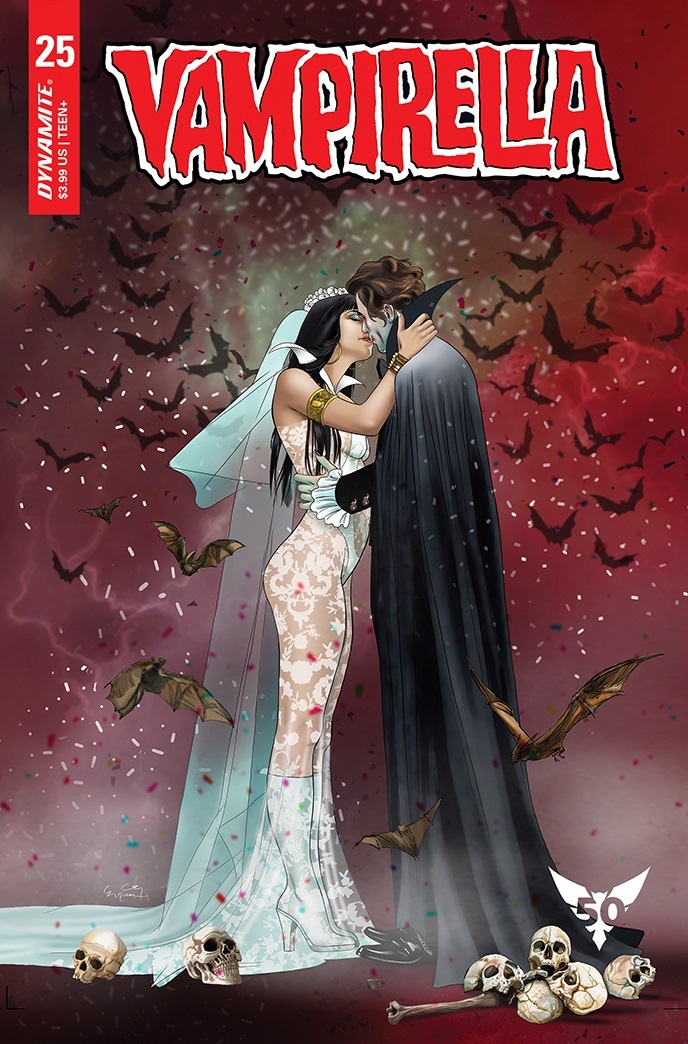 July 19, Mt. Laurel, NJ: Yes, you read that right. Not a fake out, not a dream – Vampirella’s 50th anniversary series is coming up on a massive celebration and marriage in this fall’s issue #25 by Christopher Priest and Ergun Gunduz!

Can the Daughter of Drakulon cheat fate? A mysterious, innocent young man is beset with a deadly prophecy. He may just be the resurrection of the one and only deadly Dracula. But with a chance of breaking the curse with the power of love, Vampirella forges a bond in blood to save his life and destiny. Check the registry, clean your tuxedo, and save the date – October 20th!

“Like most everything we’ve done in VAMPIRELLA, expect the unexpected,” said writer Christopher Priest, “Which, of course, makes it really hard to promote without giving away the surprises. It’s a tired trope to say this is a Dracula story unlike any you’ve read before – but it really is. And, unlike some other big announcements, our gal won’t be left at the altar!”

In “Seduction of the Innocent,” Vampirella survived a tragic plane crash engineered by an alliance of her greatest foes – including her own mother! Readers met a diverse cast of new characters including Victory, Benny the Witch, Doc Chary, Katie the vampire groupie, the Six Marys, and more. Next, in “Interstellar,” the vampiric heroine returned to her home planet of Drakulon, faced with the moral quandary of saving the mother who just manipulated her, and retracing her own origin.

Then in issues #23 and 24, the runup to the “Red Mass,” Vampirella is stalked by Shane The First Man, a murderously unhinged Apollo astronaut from an alternate Earth. Vampirella quickly learns that Shane’s descendant, a child she’d once shielded from religious zealots, has grown to manhood and is a carrier of the Dracula Virus: the genetic essence capable of reincarnating the deadliest evil the world has ever known. While seeming nothing at all like the dark lord, FBI Agent Matt Ecsed is, nonetheless, under an ageless curse, destined to become the immortal Dracula – unless Vampirella makes the ultimate sacrifice. Everything has lead to this!

And that’s not all! This explosive issue marks the conclusion of the 50th anniversary celebration. But could it possibly be the end of Priest’s tales of Vampirella? It wouldn’t be fair to just drop the microphone after a wedding, so fans can stay tuned for the exciting next paths for the character to be announced soon… It’s the ending of the critically acclaimed era, but the start of something even bigger!

To really celebrate this epic event and culmination of Priest’s two year tenure, a bounty of breathtaking variant covers is needed, in the grand Dynamite tradition. Celebrated international artist Ergun Gunduz turns in a can’t-miss peek at the bridal gown. Returning favorites like Lucio Parrillo, Shannon Maer, Marco Mastrazzo, InHyuk Lee, and Maria Laura Sanapo contribute covers. They’re joined by some of today’s most in demand talents including Rose Besch, Zoe Lacchei, KyuYong Eom, and Emanuela Lupacchino. Many of the artists also have fun showing off their own alternate depictions of Dracula, as editor Matt Idelson challenged his artists to “Think outside the coffin!” – and they’ve delivered in spades! 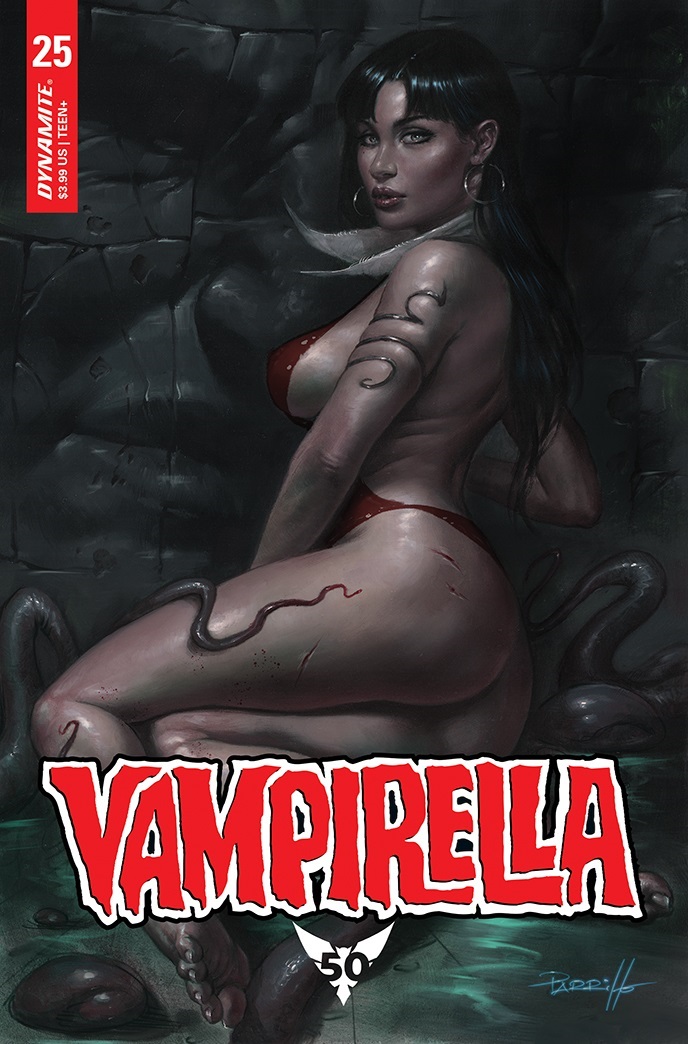 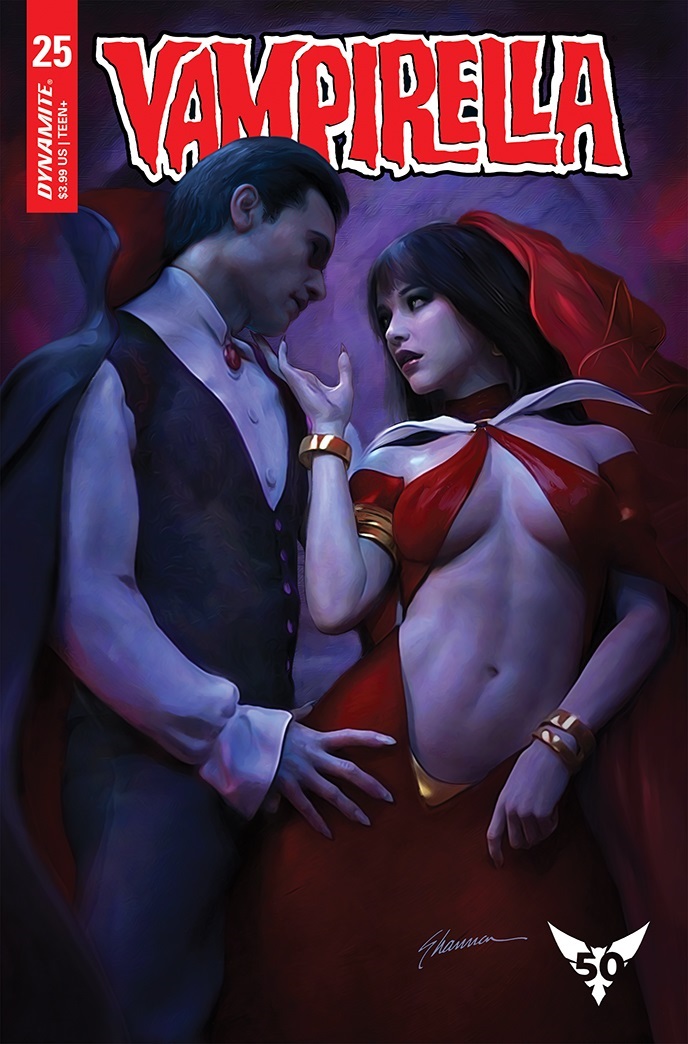 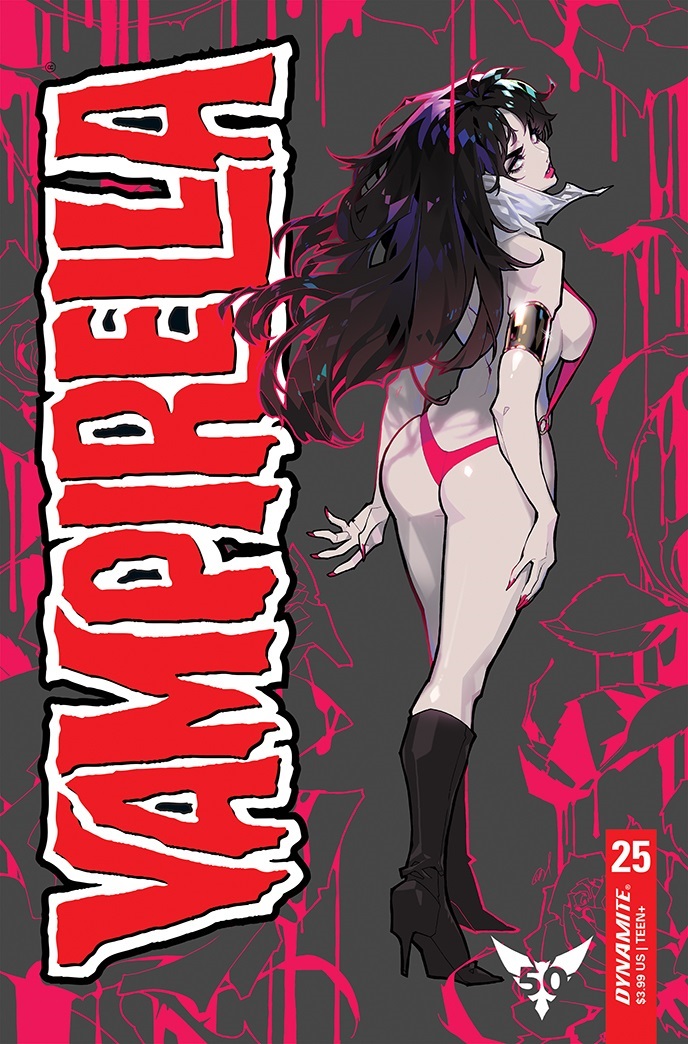 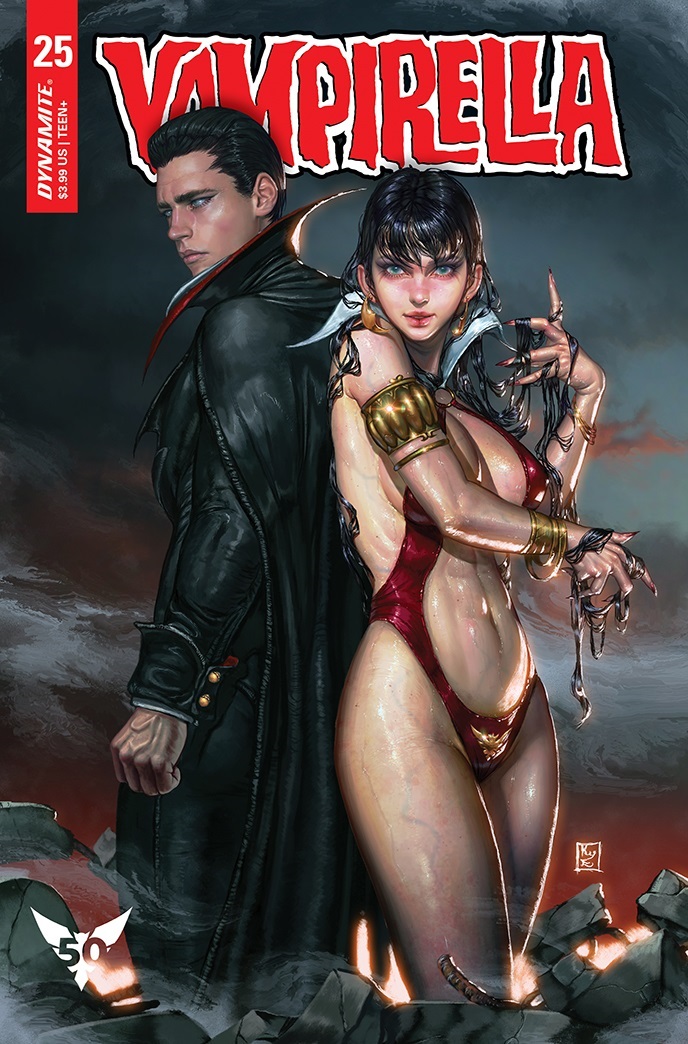 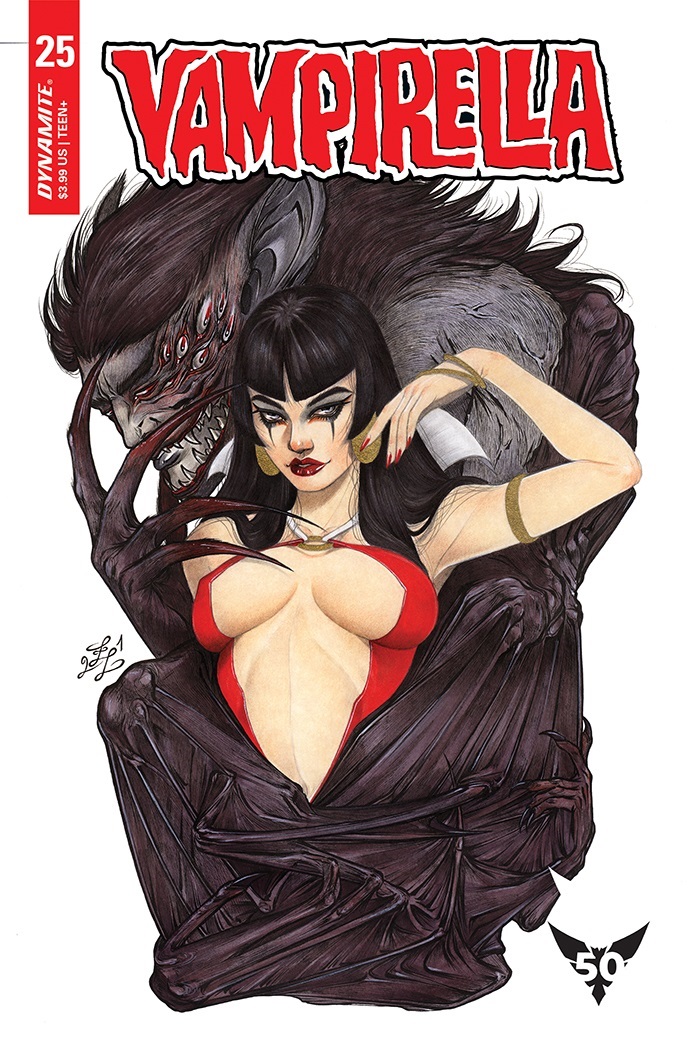 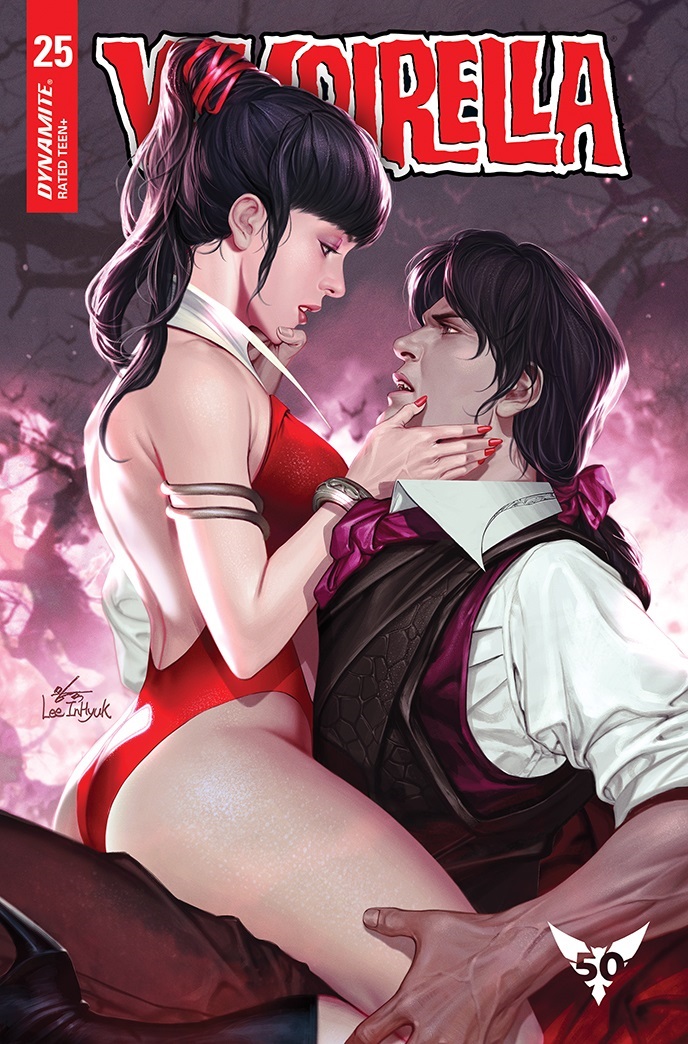 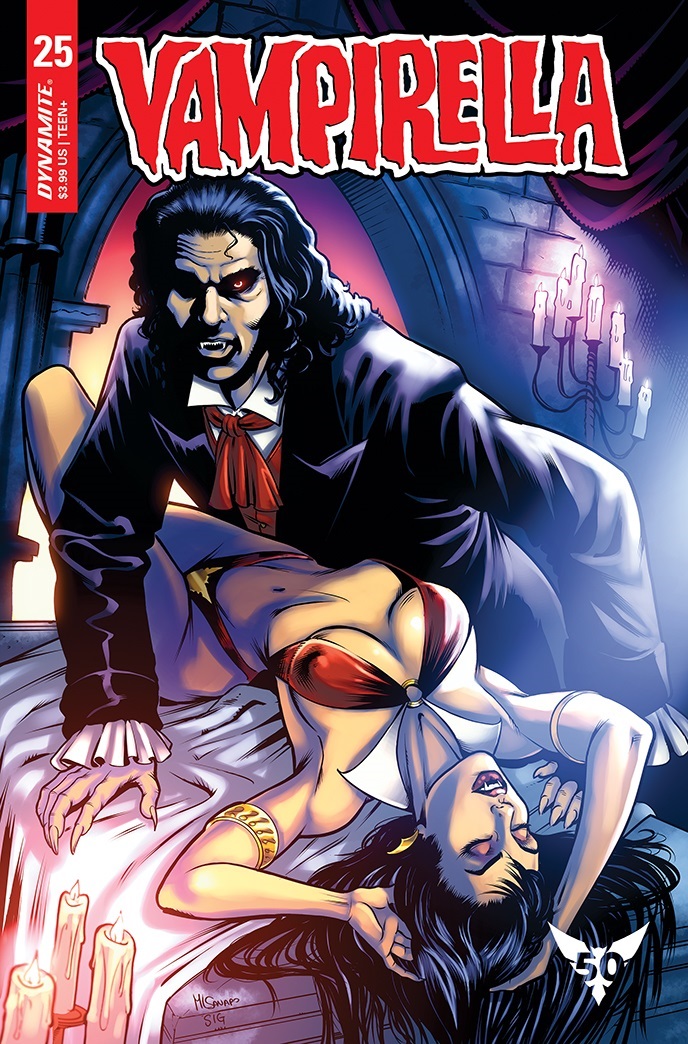 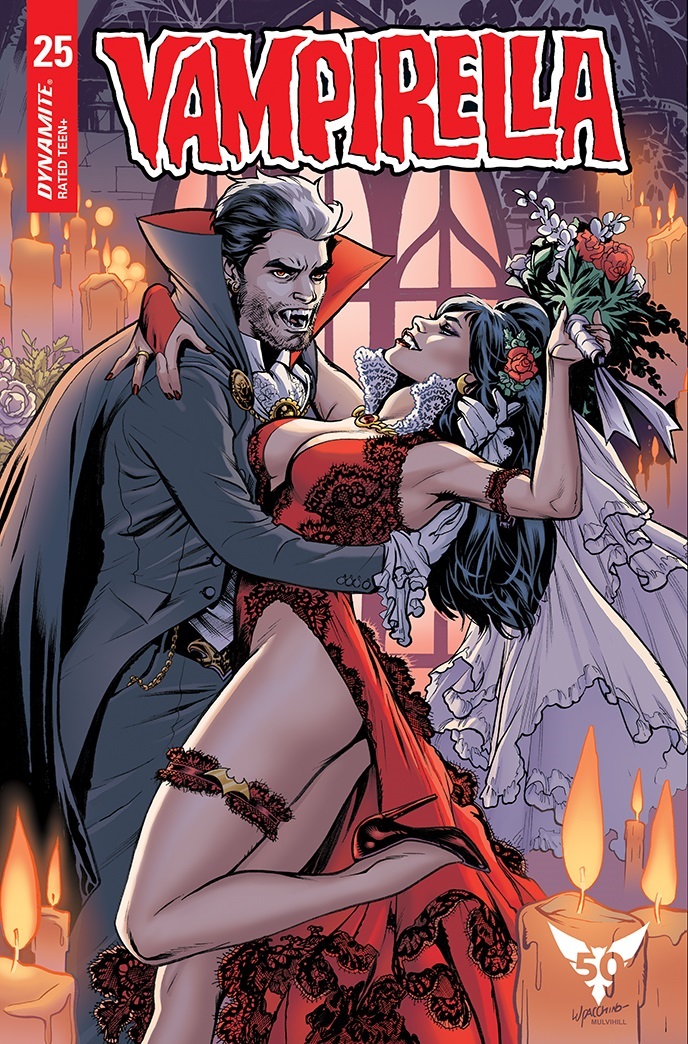 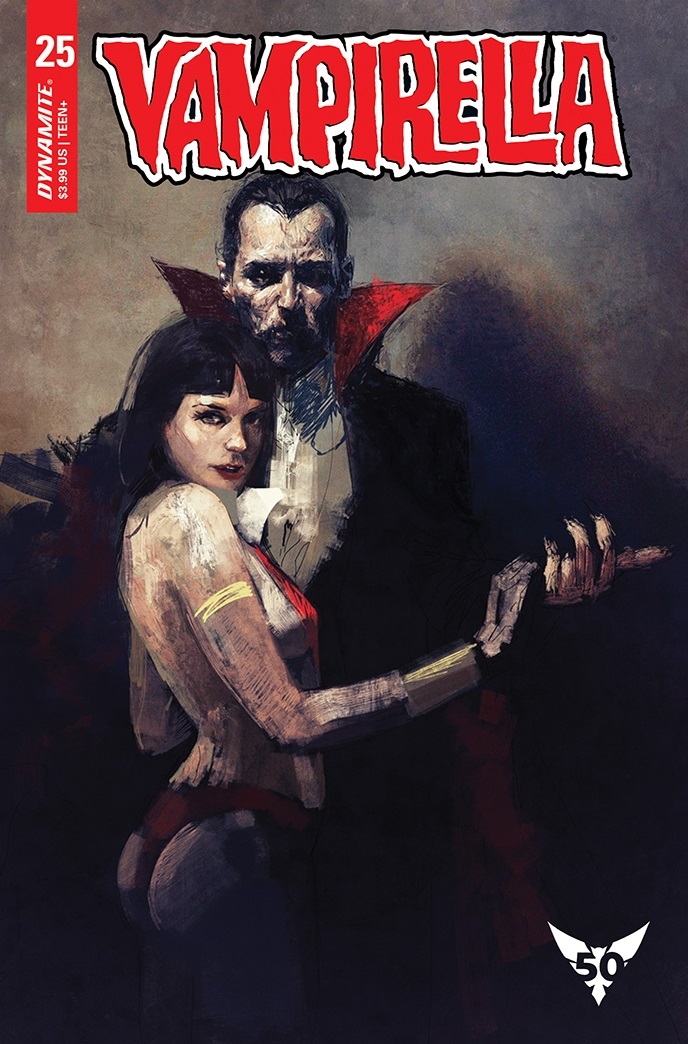 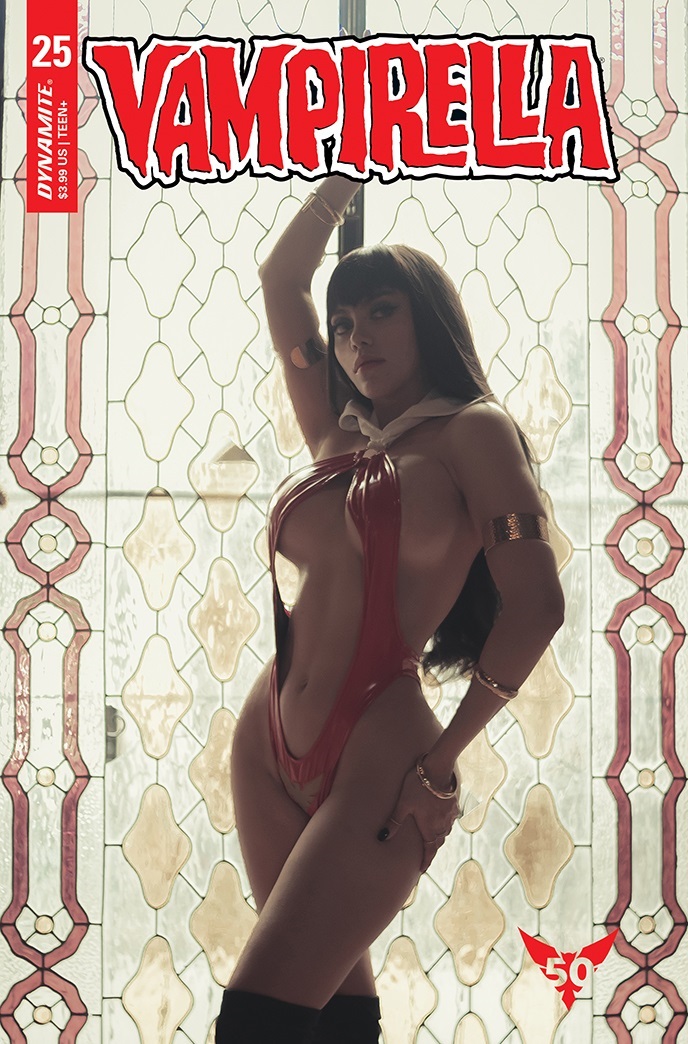 VAMPIRELLA #25 is solicited in Diamond Comic Distributors’ August 2021 Previews catalog, the premier source of merchandise for the comic book specialty market, and slated for release in October 2021. Comic book fans are encouraged to preorder copies of the issue with their local comic book retailers. It will also be available for individual customer purchase through digital platforms courtesy of Comixology, Kindle, iBooks, Google Play, Dynamite Digital, ComicsPlus, and more!