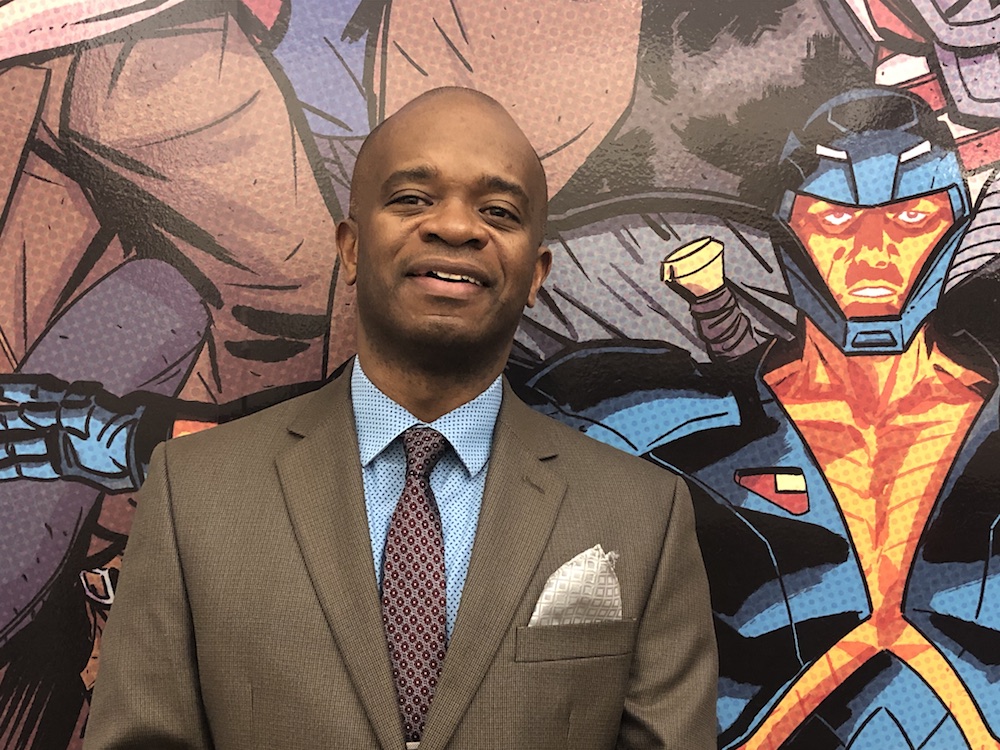 “I personally hand-picked Joe to join us here at Valiant not only because of his great skills and experience as a comics editor but because I know how passionate he is for these characters and how well he’ll treat them,” said Valiant Editor-in-Chief Warren Simons. “Joe is a fantastic addition to the editorial staff and will help us continue to be one of the best publishers in comics today. I can’t wait until we announce some of the titles and projects we are working on together.”

Illidge’s first job in the comic book industry was at Milestone Media, Inc., the groundbreaking comic book publisher and creators of “Static Shock,” the character featured in the award-winning WB animated series. As an editor on the Batman line of comic books for DC Entertainment, his tenure included the year-long event “Batman: No Man’s Land” and Batman line-wide relaunch. Illidge’s experience as a Batman editor led him to become the DC Entertainment liaison with WB’s animation team on the critically acclaimed Batman Beyond animated series. Recently, Illidge was a Senior Editor for Lion Forge Comics where he spearheaded “Catalyst Prime,” the publisher’s superhero comic book line featured in The Hollywood Reporter and Entertainment Weekly.

Illidge was listed as one of the “Best Editors of 2017” by Comicosity. In addition to his coverage by The Washington Post, The New York Times, CNN Money, the BBC, Entertainment Weekly, The Hollywood Reporter, and Publishers Weekly, Illidge has been an invited speaker at John Jay College of Criminal Justice, the C3 Comic Creator Conference, Skidmore College, San Diego Comic-Con, his alma mater The School of Visual Arts in New York City, Purdue University, the Schomburg Center for Research in Black Culture, and The San Francisco Public Library. Illidge was featured in the 2017 History Channel documentary series, “Superheroes Decoded,” discussing popular comics icons from Batman to Luke Cage.

“I’ve been a fan of the Valiant Universe of titles from the very beginning, and it’s truly one of the best, most versatile, and most beloved fictional universes in comics. The company’s legacy is a testament to a clear vision, quality, unquestionable experience, commitment, and strong relationships with the creators, fans, and retailers,” said Illidge. “HARBINGER has always been one of my favorites, and Faith Herbert may be my favorite character in the Valiant line. Storylines like BOOK OF DEATH, HARBINGER WARS, ARMOR HUNTERS, and THE VALIANT are exemplary; the new X-O MANOWAR series is stellar; HARBINGER WARS 2 is going to take science fiction in comics to a new level; and what Andy Diggle has planned for the future of SHADOWMAN promises to be exciting, intense, and memorable.”

“In my new role as Executive Editor, I look forward to working with the great people here to lead the Valiant Universe of characters to the next evolutionary stage and unlocking the ideas that will further cement Valiant’s foothold in an industry of new growth areas and paradigm shifts,” Illidge added. “With Vin Diesel about to embark on playing Bloodshot in the upcoming film and people like friend Reginald Hudlin on board to shape the story of Shadowman for a global audience, Valiant Entertainment is going to continue to be the provider of quality stories on a worldwide scale.

“I’m a fan, and I stand on the shoulders of giants in shepherding this amazing mythology, so expect the future to be even more Valiant,” Illidge concluded.

“There is no question that Joe has an intense love for these characters, and that is what really matters,” said Valiant Publisher Fred Pierce. “He is a fantastic new player on our team. What he and Warren are planning for the next year will stand up to – if not exceed – what we have done in the past. I think the fans will be very happy.”

A New Look at Bestselling Author Sabaa Tahir’s AN EMBER IN THE ASHES Graphic Novel From BOOM! Studios