Return to the original world of Blade Runner 2019 in this perfect jumping on point for new fans! Ex-Blade Runner Ash and her charge Cleo have returned to Los Angeles, but much has changed in the years since their escape and sinister ghosts from their past are gathering! New story by Academy award-nominated screenwriter MICHAEL GREEN (Blade Runner 2049, Logan) and co-writer MIKE JOHNSON (Supergirl)!

Ahead of their next cinematic outing Minions: The Rise of Gru in 2020, the banana-loving mischievous Minions are back again to serve their despicable masters! More chaos and hijinks are in store for the ever-unpredictable minions in this all-new graphic novel, featuring everyone’s favorite accident-prone but ever-loyal yellow organisms!

The mini-marauders return in this brand new collection of chaotic comedic calamity. They’ve taken on the greatest evil the world has ever seen – now it’s time to take on their toughest challenge yet… SPORT! So hop, skip and jump into the world of javelins, bananas, balls, bananas, hurdles, and – more bananas?! This is the Minions like you’ve never seen them before. Ready. Set. Bananas!

THE PHILOSOPHY OF VENOM HC

Uncover the crazed and illustrious mind of the original symbiote superhero in this lavishly presented collection of Venom’s most heroic, villainous, and somewhat killer moments from his comic book history.

It’s everything you need to know about your new-favourite anti-hero, ahead of his second outing on the silver screen, with Tom Hardy reprising his role as Venom, and Woody Harrelson set to star as Cletus Kasady – AKA, Carnage! Venom 2 is scheduled for release October 2nd, 2020!

The multi-award winning world of Assassin’s Creed visits a new era in the Vietnam War!

Tomo, one of the youngest members of the Japanese Assassin cell, has uncovered a conspiracy. More of a man of science than a man of action, Tomo investigates further, leading him to follow the footsteps of Assassins that operated during the Vietnam War.

Unveil dark secrets and forgotten myths as we journey to the very beginnings of the assassin brotherhood. Includes three exclusive Artcards!

LIFE IS STRANGE: PARTNER’S IN TIME #3

Max, Chloe and Rachel hit High Noon in Tombstone! As the road trip continues with two simultaneous tours, it’s time for a showdown between Cowboys and…Pirates?

EXPERIENCE THE COLLECTION COMIC ADVENTURES OF MAX, CHLOE AND RACHEL THIS STUNNING BOXSET!

One year after their home was destroyed, the story continues for beloved heroines Max and Chloe, as they face fate and twist timelines in the emotional reunion fans never thought they’d see!

Adler and her team of Victorian heroines face-off against AYESHA’S army of AMAZONS. From the World Fantasy Award-winning writer Lavie Tidhar and artist Paul McCaffrey (DC’s Men of War, TMNT) comes an all-new story written in the vein of Alan Moore and Kevin O’Neill’s The League of Extraordinary Gentlemen!

Brought together by a clandestine corporation, the world’s greatest minds are set a challenge of epic proportions: the dodecathlon. Unlikely alliances are made in order to fulfill the quest, and uncover the mysterious truth behind it all. But as the conspiracy is unveiled, how many will survive…? 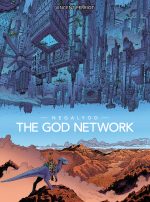 In a post-apocalyptic far future/alternate world, dinosaurs roam the desolate land, while the last denizens of humanity survive together in technological cities run by a military regime. Winner of the revered Saint-Michel Prize for writing!

A gripping, prescient masterpiece of science fiction, beautifully painted by award-winning creator Enki Bilal – legendary comics artist for The Nikopol Trilogy. Legends of Today brings together the first three volumes that Enki Bilal has created in collaboration with the award-winning scriptwriter Pierre Christin.  This endearing panorama of the generous utopias of the time, nourished by modern fantasy and a certain humor, still preserves a remarkable freshness in today.

Explore the amazing word of Star Wars: The Mandalorian, the critically acclaimed series that expands the Star Wars galaxy to incredible new frontiers.

Celebrate the 40th anniversary of Star Wars: The Empire Strikes Back in style, with a host of exclusive interviews and fascinating features.

This edition of Insider features:

Jayne’s ex, Temperance McCloud, gets in touch begging for help. She lives on a desert moon where bandits are trying to gain control of her town’s water supply. Jayne persuades the Serenity crew to go there, but on arrival they discover two things: outlaws with a fanatical devotion to their leader who will stop at nothing to get to the water, and that Temperance has a daughter born less than a year after she and Jayne broke up called Jane McCloud…

A woman wakes up, frightened and alone – with no idea where she is. She’s in a room but it’s shaking and jumping like it’s alive. Stumbling through a door, she realizes she is in a train carriage. A carriage full of the dead. This is the Night Train. A bizarre ride on a terrifying locomotive, heading somewhere into the endless night. A personal hell unfolding in an apocalyptic future.

Has Donald Lam gone to the dark side? From the world-famous creator of “Perry Mason,” Erle Stanley Gardner – at his death the best-selling American writer of all time – comes another baffling case for the Cool & Lam detective agency: SHILLS CAN’T CASH CHIPS. Return to the 1960s as a simple insurance investigation into a car accident puts Bertha Cool and Donald Lam on the trail of murder. It’s Gardner’s twistiest caper ever.