The True Story of Four Days That Changed The Course of History in BIG BLACK: STAND AT ATTICA From BOOM! Studios 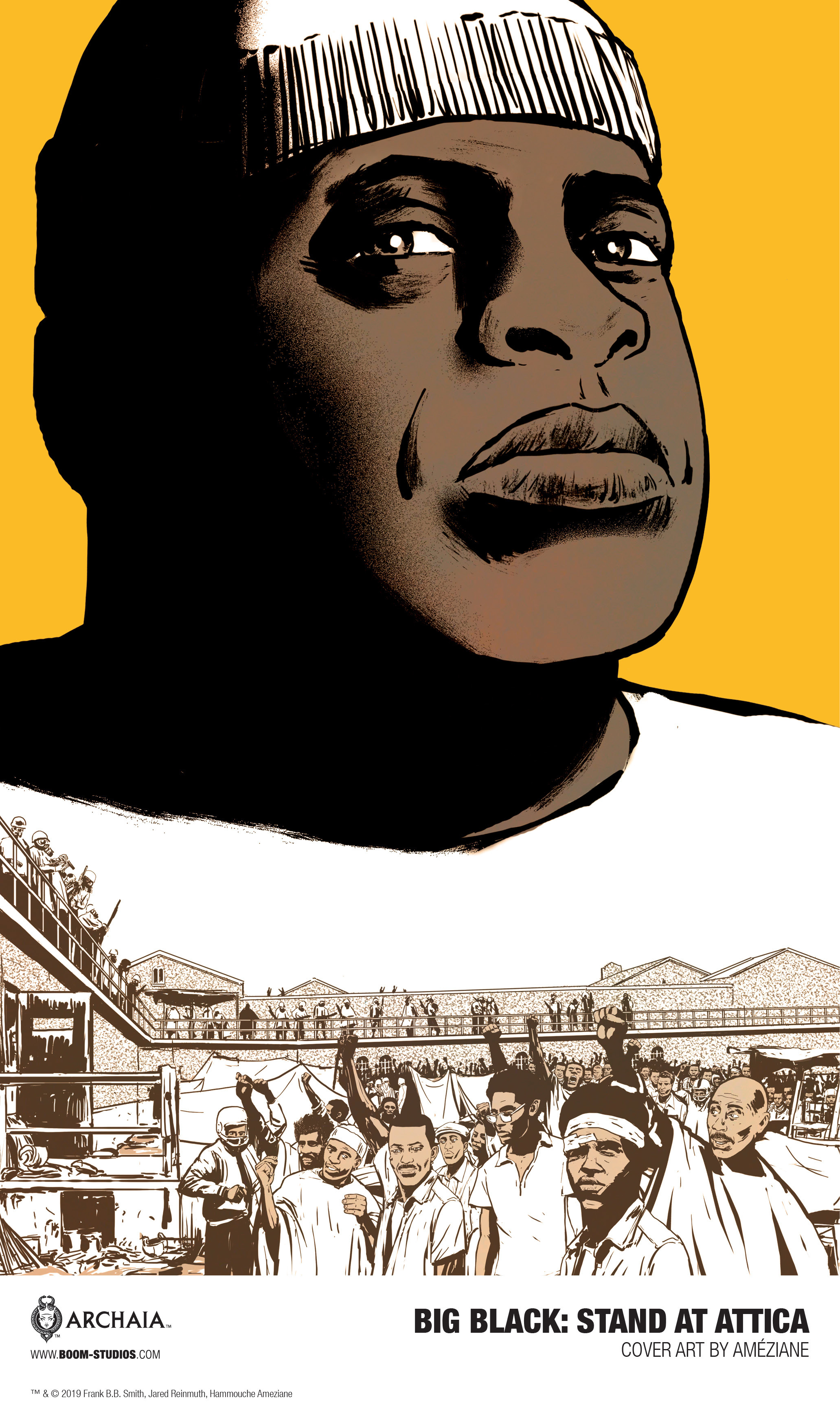 LOS ANGELES, CA (August 2, 2019) – BOOM! Studios today announced a brand new original graphic novel, BIG BLACK: STAND AT ATTICA, written by Frank “Big Black” Smith and Jared Reinmuth and illustrated by Améziane (Muhammad Ali), available in stores February 2020. This is an unflinching look at the true story about the price of standing up to injustice in what remains one of the bloodiest civil rights confrontations in American history, told for the very first time from the man at the center of it all – Frank “Big Black” Smith.

In the summer of 1971, New York’s Attica State Prison was a symbol of everything broken in America – prisoner abuse, rampant racism and a blind eye turned towards the injustices perpetrated on the powerless. But when the guards at Attica overreacted to a minor incident, the prisoners decided they’d had enough – and revolted against their jailers, taking them hostage and making demands for humane conditions.

A natural leader, Frank “Big Black” Smith found himself at the center of this uprising, struggling to protect hostages, prisoners and negotiators alike. But when the only avenue for justice seemed to be negotiating with Governor Nelson Rockefeller, Big Black soon discovered that a peaceful resolution for the prisoners in Attica was unattainable.

Frank “Big Black” Smith was a former inmate at Attica prison who was tortured by officers following the deadly 1971 uprising. After his release from prison, he worked as a substance abuse counselor and devoted his life to becoming the voice of his fellow prisoners in a 26-year lawsuit against New York State. Smith later became an advocate for the Forgotten Victims of Attica, a group comprised of surviving hostages and relatives of the dead prison guards who were believed to have been encouraged to accept limited benefits which barred them from suing the state. Smith married in 1983, studied to be a paralegal, and worked as an investigator for lawyers. He passed away at 70 years old in Kingston, N.C., after a long battle with cancer. He is survived by his wife, Pearl.

Jared Reinmuth has worked as an actor, writer, teacher, director, and songwriter. He made his acting debut at the 1994 Dionysian International Theatre Festival in Veroli, Italy in Karen Malpede’s The Beekeeper’s Daughter.  Reinmuth made his directorial debut in 2016 at the Theater for the New City’s Dream UP Festival with Andrea J. Fulton’s Roof-Top Joy. His adaptation of Alexandre Dumas’ seminal masterpiece, Monte Cristo, debuted at the Hackensack Cultural Arts Center. He began his writing collaboration with Frank “Big Black” Smith in 1997, while assisting his father, famed Attica attorney Dan Meyers. In 2017, at the suggestion of his friend and colleague, Patrick Kennedy, Reinmuth joined forces with co-creator and artist Améziane, Frank Smith’s wife Pearl Battle Smith, and composer Alex Tichane to fully realize the work initially started by Frank “Big Black” Smith, as the graphic novel BIG BLACK: STAND AT ATTICA.

“In September of 1971, I was a small child sitting in the living room with my brother and sister as the events at Attica played out on television. My mother vowed that if we were ever in a position to contribute, we would help the Attica Brothers,” said writer Jared Reinmuth. “Frank ‘Big Black’ Smith was our hero, and [the fact that] decades later he and his wife, Pearl, would trust me to attempt his biography stands as the honor of my life. But it was only with the addition of Améziane and his brilliant artwork that the project took flight. And when BOOM! Studios took us on, this story found its home. The opportunity to work with insightful and talented editors like Sierra Hahn and Allyson Gronowitz completes the circle to fulfill a promise made decades ago.”

“Jared felt certain that the biography of a legendary Attica Brother, Frank ‘Big Black’ Smith, was the perfect book for me. He was 100% right,” said artist Améziane. “Together, with the support of Frank’s family and those who for decades stood with the Attica Brothers, we strove humbly to do justice to a story much larger than ourselves. I couldn’t be more proud to present it to you.”

BIG BLACK: STAND AT ATTICA is the latest release from BOOM! Studios’ award-winning Archaia imprint, home to inspiring graphic novels such as The Realist by Asaf Hanuka, Girl on Film by Cecil Castellucci and Vicky Leta, Melissa Duffy, V. Gagnon & Jon Berg, New World by David Jesus Vignolli, About Betty’s Boob by Vero Cazot and Julie Rocheleau, Waves by Ingrid Chabbert and Carole Maurel, The Grand Abyss Hotel by Marcos Prior and David Rubín, and more.

“The story of Frank ‘Big Black’ Smith and the Attica Brothers represents a pivotal moment in our own violent and bloody history within the justice system and our country’s relationship with race, religion, and class,” said Sierra Hahn, Executive Editor. “The work done by Big Black, Jared, and Améziane in this graphic novel honors those who fought against injustice of the time and asks us to look at where we are today.”

Print copies of BIG BLACK: STAND AT ATTICA will be available for sale in February 2020 at local comic book shops (use comicshoplocator.com to find the nearest one), bookstores or at the BOOM! Studios webstore. Digital copies can be purchased from content providers, including comiXology, iBooks, Google Play, and the BOOM! Studios app.

For continuing news on BIG BLACK: STAND AT ATTICA and more from BOOM! Studios, stay tuned to www.boom-studios.com and follow @boomstudios on Twitter. 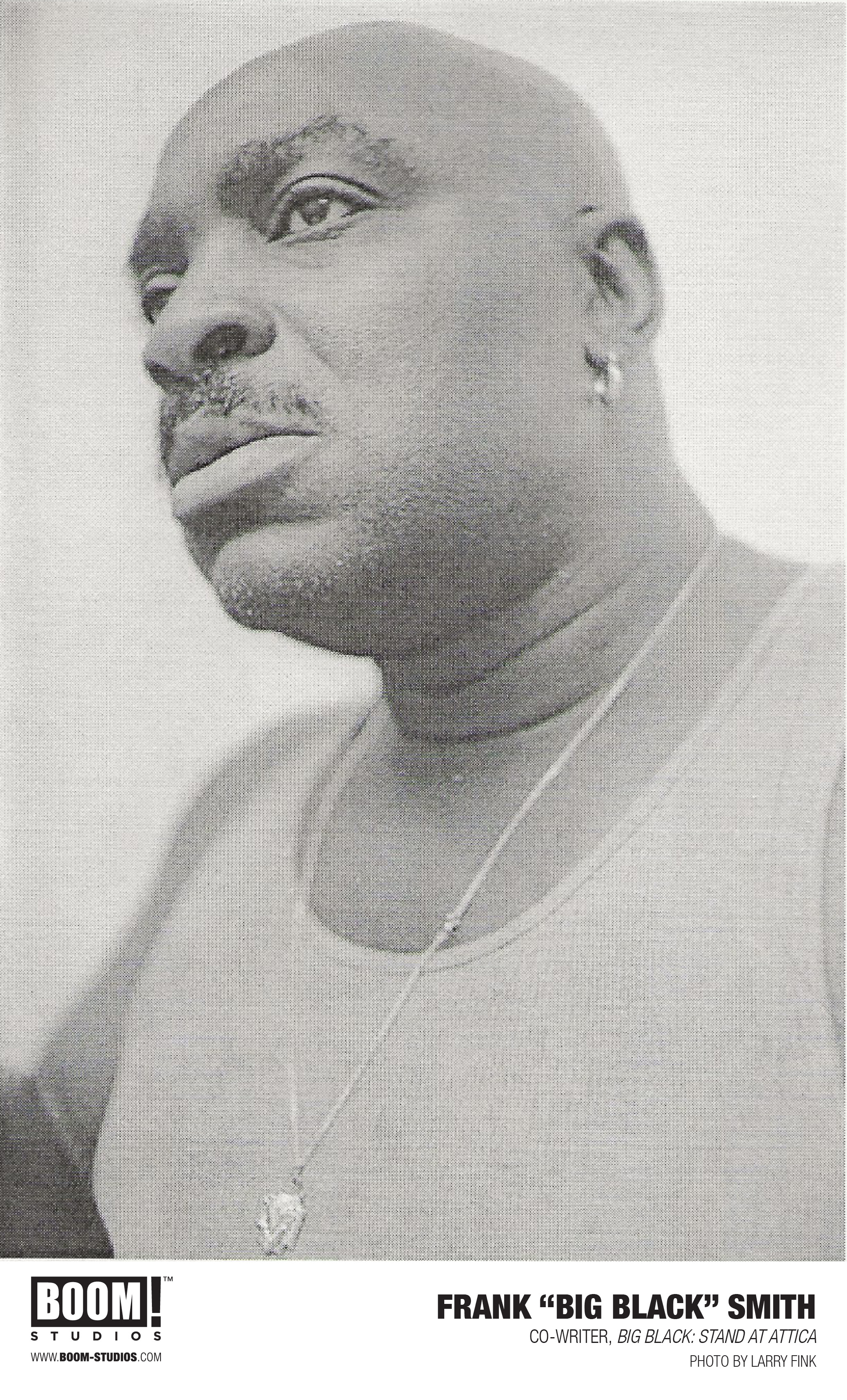 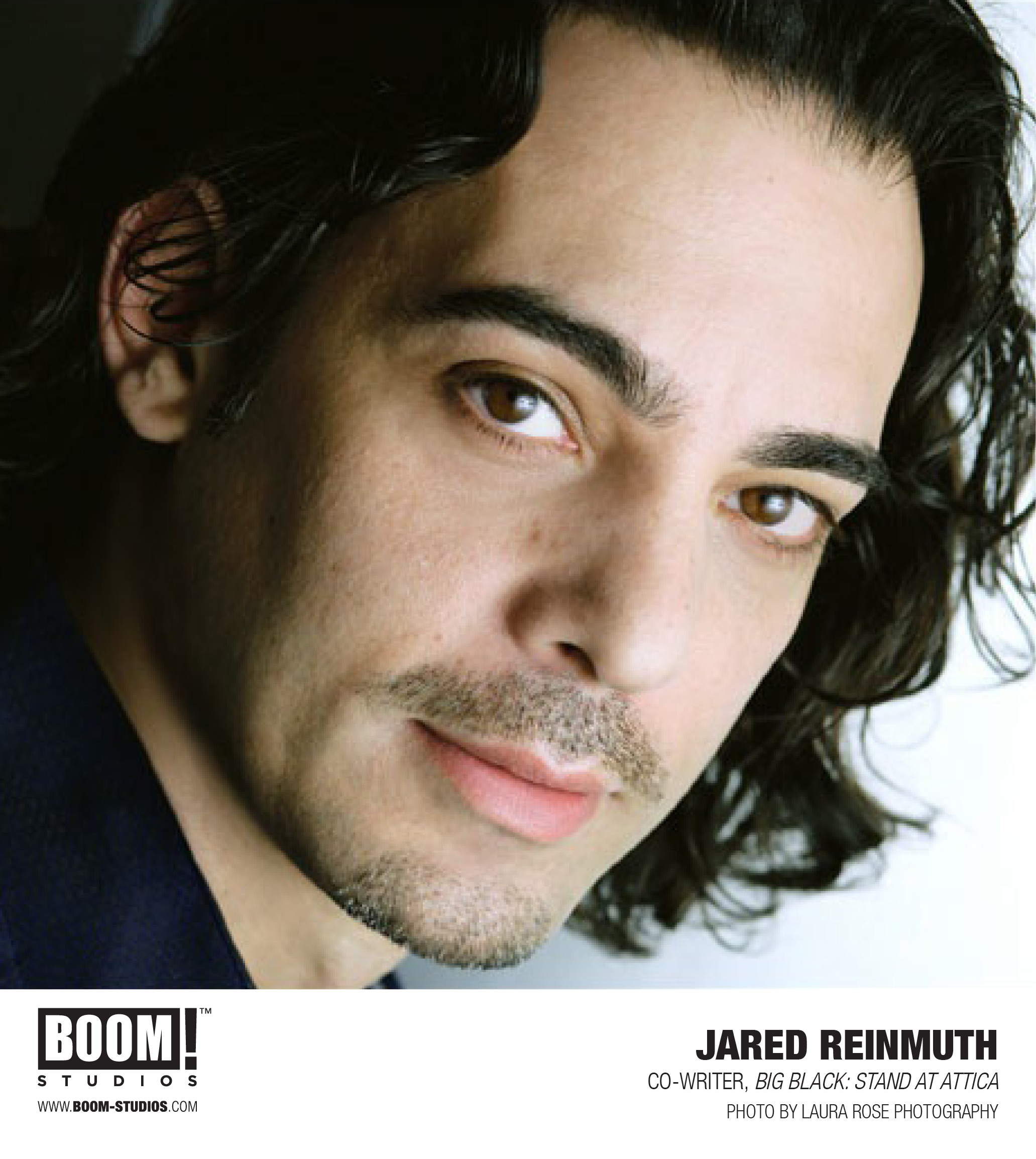 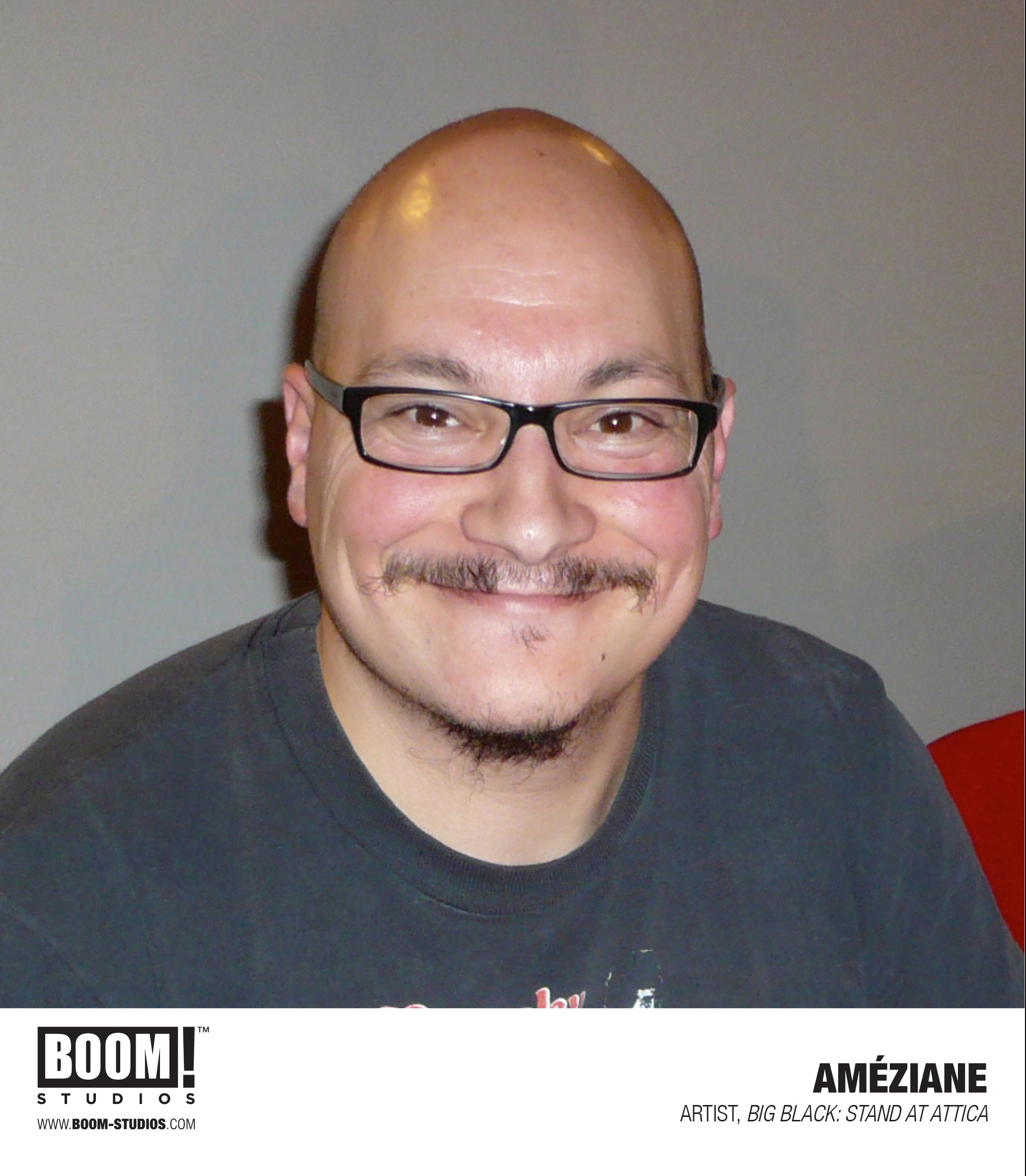