News
Celebrate a Decade of My Little Pony Comics with a Fun, Frolicking Twist on
Louisa May Alcott’s Masterpiece and an Encore Presentation of
Friendship is Magic #1 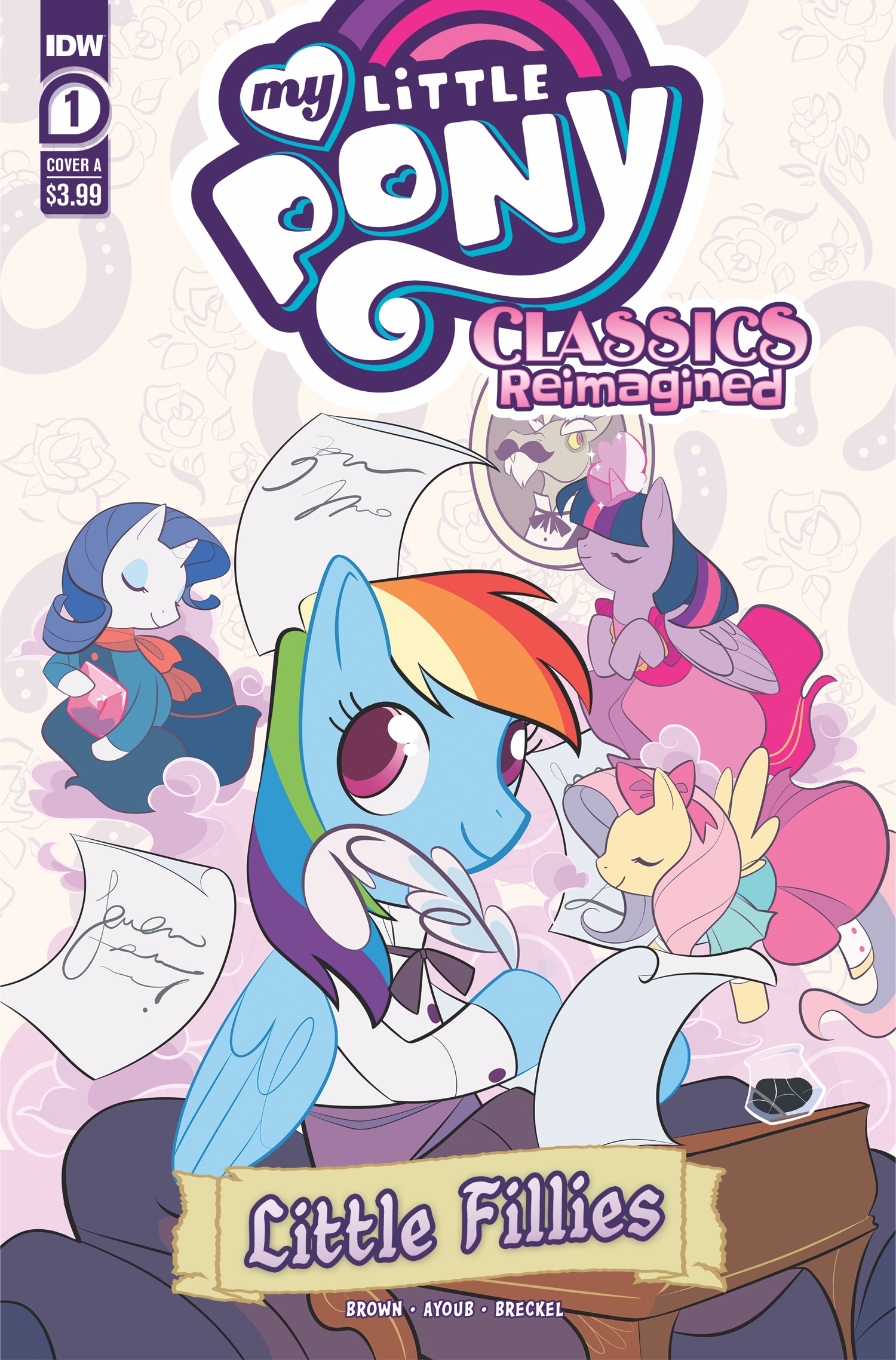 My Little Pony: Classics Reimagined—Little Fillies, written by Megan Brown, illustrated by Jenna Ayoub, and colored by Heather Breckel, is a new series about love, life, and sisterhood. Rainbow Dash, Twilight Sparkle, Fluttershy, and Rarity take on the roles of the March sisters, dreaming of life beyond Broncord, Massahoofetts. Rainbow Dash in particular yearns for excitement—something to write about. So when Applejack, the Marches’ neighbor, arrives home with tales of eel-wrangling and apple-eating, Rainbow Dash and her sisters dare to hope for more.

“I’m really honored to be able to adapt one of the most timeless pieces of American literature for the wonderfully vibrant world of My Little Pony,” says Brown. “Every time that I consume the story of Little Women, I find something new that really speaks to me on my own journey, and tackling that timeless appeal with amazing characters—like Rainbow Dash, a.k.a Jo—has been such a joy. I hope that returning readers find a little something that speaks to them, and that new readers are introduced to the classic story of some very remarkable women…or fillies, as the case may be,” says Megan Brown.

“Working with Megan’s script has been a delight. And I’m all about drawing ponies in hoop skirts!” says Ayoub.

“Little Fillies kicks off our first series in the Classics Reimagined line. It’s a hilarious, heart-warming, meta, pony-fied take on Louisa May Alcott’s novel. The ponies fit surprisingly well into the roles of the titular women—Rarity is such an Amy—and the creative team has done an amazing job translating the novel into a comic series that My Little Pony and literature fans alike will love,” says editor Riley Farmer.

My Little Pony: Classics Reimagined—Little Fillies #1 will be available with multiple cover variants for retailers and fans to enjoy, including Cover A by series artist Jenna Ayoub, Cover B by Agnes Garbowska, and a special Retailer Incentive variant by Rose Bousamra.

My Little Pony: Friendship is Magic—10th Anniversary Edition revisits the bestselling issue that started it all, written by Katie Cook, illustrated by Andy Price, and colored by Heather Breckel! Ever since their comic book debut, Twilight Sparkle, Applejack, Pinkie Pie, Rainbow Dash, Fluttershy, and Rarity have brought friendship, magic, and fun to comic lovers everywhere. Join them at the very beginning of their decade-long journey with this special reprint issue, with bonus material including a gallery of all eight original covers, an interview with My Little Pony artist and writer Tony Fleecs, and an all-new short from Jeremy Whitley!

“We wanted to pay homage to such a long-standing comic series and take some time to reflect on the past ten years. The 10th Anniversary Edition revisits #1 and includes some bonus content that might just change your perspective on the entire series,” says Farmer.

Like the Little Fillies debut issue, My Little Pony: Friendship is Magic 10th Anniversary Edition will be available with multiple cover variants, including Cover A by Amy Mebberson, Cover B by Andy Price, Cover C by Agnes Garbowska, and two special Retailer Incentive variants by Mebberson and Price, respectively.

For information on how to acquire My Little Pony comics and graphic novels from IDW, please contact your local comic shop or visit www.comicshoplocator.com to find a store near you.

About IDW
IDW (NYSE AMERICAN: IDW) is a leading media company providing uniquely compelling stories and characters in various genres for global audiences across all entertainment platforms. The award-winning IDW Publishingand IDW Entertainment divisions holistically evaluate and acquire IP for franchise development across comics and graphic novels, television, theatrical, merchandise, and other entertainment platforms, in addition to bringing world-renowned storytelling to life with our creative partners.

About Hasbro
Hasbro (NASDAQ: HAS) is a global play and entertainment company committed to making the world a better place for all children, fans and families. Hasbro delivers immersive brand experiences for global audiences through consumer products, including toys and games; entertainment through eOne, its independent studio; and gaming, led by the team at Wizards of the Coast, an award-winning developer of tabletop and digital games best known for fantasy franchises MAGIC: THE GATHERING and DUNGEONS & DRAGONS.