Rebellion is delighted to announce a limited edition re-issue of the classic board game based on the world of Judge Dredd – as well as the Mega-Mania expansion set, featuring the Happy Hour expansion!

Block Mania is the classic two-player game of manic destruction in Mega-City. Each player controls the citizens of an entire Mega-City block, as they attempt to destroy the block next door – or at least do it a lot of damage before the Judges arrive!

This limited-edition replica printing will be available from 2000AD.com from 12noon on Friday 27 November and to retail from Asmodee UK.

It brings the classic work of Space Hulkdesigner Richard Halliwell back to print for the first time in decades.

Relive the chaos of hives soaring in bat-suits; hungry alien Kleggs commandeering Sky-Rail cars; and City-Def forces infiltrating the neighbouring block to blow it to smithereens, before the Judges unleash the riot foam to shut you down!

Mega-Mania expands Block Mania with additional counters and two new boards, allowing up to four players to join in the chaos at once.

And for the first time the Happy Hour expansion is also included, adding Robo-Dogs, Sucker Guns and Trip Mines to the fray!

About Rebellion Unplugged:
Rebellion Unplugged is the tabletop game and collectibles division of Rebellion – one of Europe’s largest independent creative studios. It oversees development of tabletop projects for Rebellion’s wide range of intellectual properties, from the sci-fi universes of Judge Dredd and Evil Genius, to the war stories of Sniper Elite and Charley’s War. 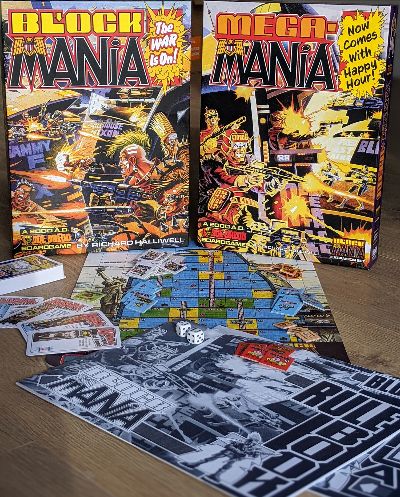 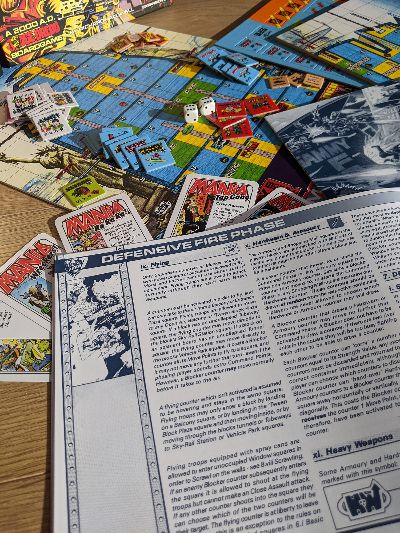